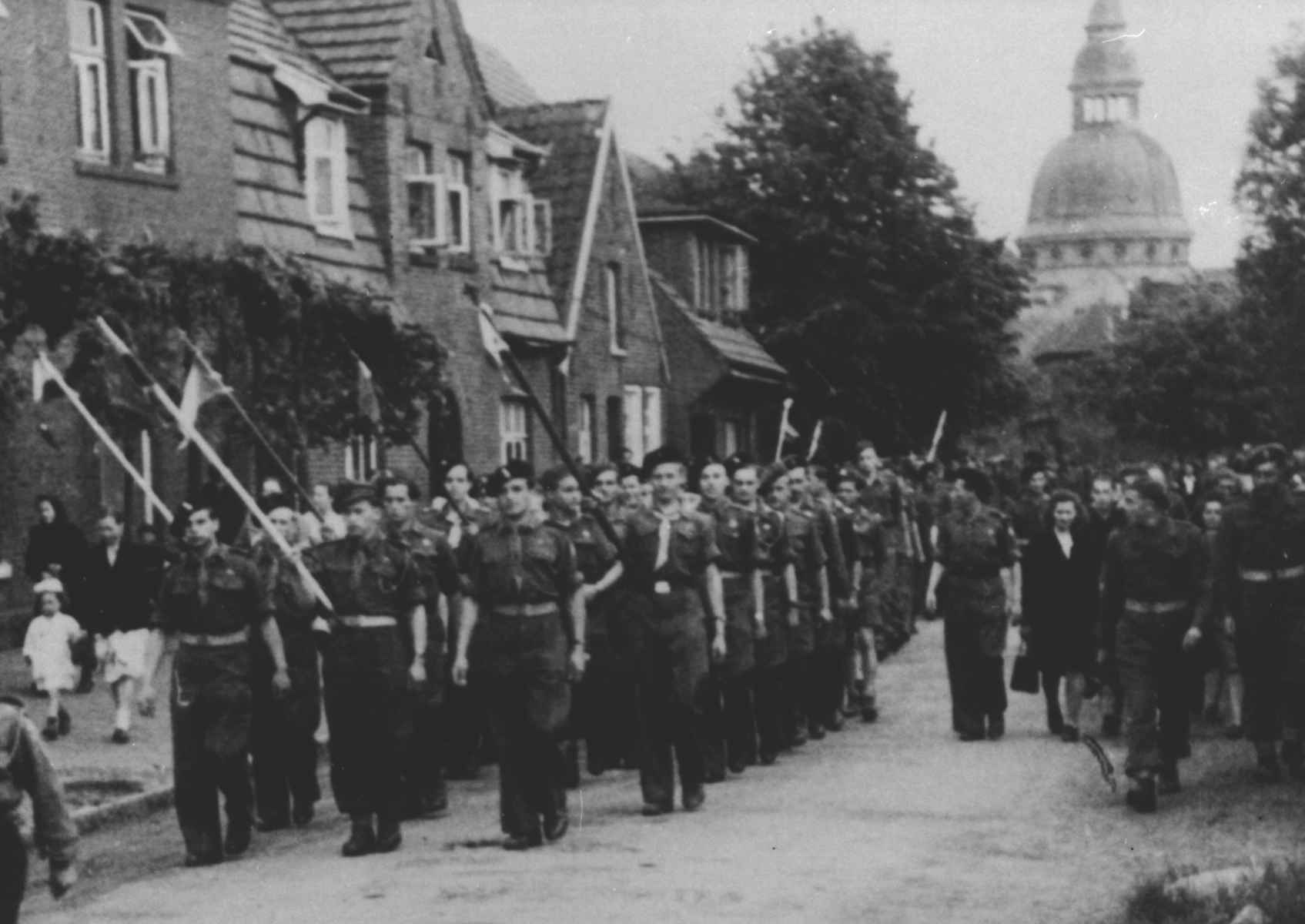 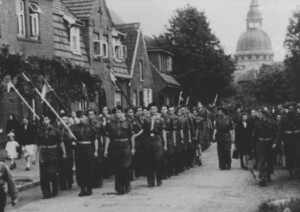 Group of Polish Scouts in front of the Saint Martinus Church in Haren. (Source: Archive A. Sekowska)

Have you ever heard of a Polish occupation zone in Germany after WWII? Gregor Christiansmeyer tells the story of the town Haren an der Ems in Western Germany, which used to be the center for a Polish administration after WWII 1945-48. This story of a vivid cultural community of Polish exiles is connoted by misunderstandings and the lack of communication – yet another lost opportunity for a peaceful dialogue in Europe?

Many people in Europe and almost all Germans know: There were four occupation zones after the capitulation of Nazi-Germany in May 1945. With the end of the Second World War these zones of Soviets, US-Americans, French and British were established. But who remembers that there was even a small zone with Polish administration in north-western Germany near the Dutch border, centered in Haren an der Ems?

Not many. Even a Polish girl who has roots from near Haren was surprised to hear about this forgotten part of history: “What? An area of Polish administration in the Ems-region?”

In the minds of many, real Polish-German-history, besides the German offensive in the Second World War, began with the new “Ostpolitik” (opening of West-German foreign policy towards former Eastern Europe) starting in the 1970s. But the shared history of these countries has been reality already decades before.

Why did we forget about it? And even more importantly, why should we remember it?

Map of the inner quarter of Haren during the Maczkow-area: streets named in Polish language. (Source: Gilles Lapers)

The story of Haren an der Ems – or Maczkow, as the Polish named the town – is a story of intercultural communication gone wrong. It is a story that teaches us how we should not deal with each other in our gradually unifying Europe.

During the era of the Nazi-government, especially throughout the Second World War, many concentration camps were established in the Emsland: the so-called Emslandlager. First political opponents of the regime were arrested here, later many prisoners of war had to live there and work hard under terrible conditions.

The British troops, which attacked this region in 1945, were supported by single Canadian, Belgian and Polish combat units. This is how the Polish ended up in the area. When the Second World War ended in Europe, it was impossible to send all the Polish displaced persons in the Emsland-area back to their hometowns – partly because there was a huge conflict between the Polish exile government and the newly installed government in Poland, which was supported by the Soviets.

Because of these circumstances the British governors gave the administration of the Emsland-area to the Polish who fought the Nazi-regime together with the Allied Forces. Haren an der Ems became the central administration-town in this Polish zone. First, all displaced persons from Poland living in the north-west of Germany were delegated to move to the Emsland. Initially the former Emslandlager were used to achieve a provisional housing for them. The most important question then was how to achieve an appropriate settlement.

Transition from Haren to Maczkow

On 20th May a demand was given to the citizens of Haren an der Ems: “According to the order of the military government the town has to be vacated by the civil inhabitants”.

Therefore on Pentecost in 1945 all citizens had left the town – forced to do so by the British army. Displaced persons were resettled from the camps to the town. What first seemed to be a short intermezzo became a period of nearly three years. This left quite a bad image in the remembrance of the Polish in the region – not only created by missing communication and exchange of ideas, but of course also by the feeling of being ruled.

Starting from 24th June the name of Haren was changed to Maczkow – in honour of the leading Polish general who fought with the British in the Second World War. During only a few weeks Haren completely changed; it really became a Polish town. Streets were named Polish, higher education schools for the Polish were founded and the Saint-Martinus-church was used by the catholic Polish inhabitants only. Moreover, the cultural activities were enriched: theatres were established and concerts organized. Even many famous Polish-exile artists and musicians came to Maczkow. For some days, it was a centre of the intellectual elite from Poland.

The former citizens of Haren, however, did not enjoy the changes. Their hometown had been taken from them and they wanted it back. The negative atmosphere was not helped by the fact that the former Haren residents were only allowed short visits to the town ­­– and even during those visits they did not get the chance to participate in the vivid cultural life that the Polish had created.

However, the situation of the Polish exiles started to get worse soon. A flood damaged the town in February and March 1946, and the Polish did not fix the damages. Since the British had acknowledged the soviet-influenced government in Poland, first displaced persons were sent to other destinations. The dream of building up a small new Polish-state in this area began to die. 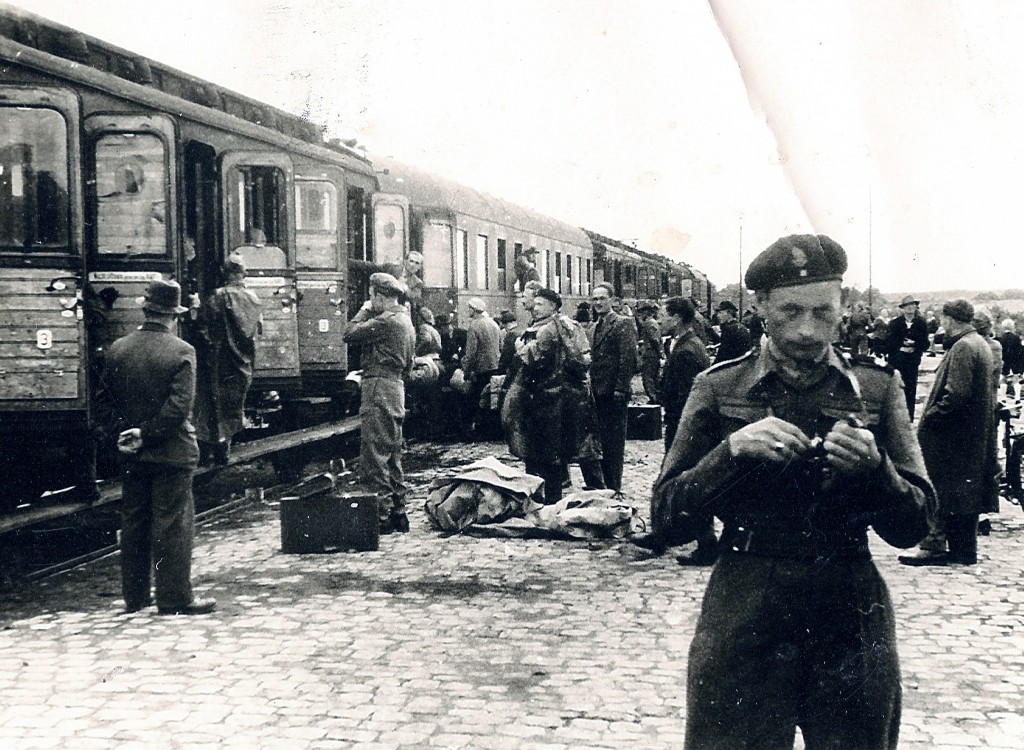 The importance of remembrance

Starting with the spring of 1947, houses were given back to their former owners. In February 1948 the schools moved away from Maczkow/Haren and in September the last Polish families left the town.

If one visits Haren an der Ems today, nearly nothing will remind him of this episode of the War- and Post-War-history. While the Emslandlager are quite present in the local remembrance, “Maczkow” is only known by a few. The website of Haren an der Ems informs about the time, but still this can be called a lost European history.

However, the story of Haren an der Ems would have an important lesson to teach us, if we only remembered it: cooperation fails without mutual understanding and respect. This is something we should not forget as we build our Europe. Besides cooperation, interest for our neighbours’ cultures is needed in today’s peaceful Europe.

Written by Gregor
(1996) is a German Eustorian who has been doing his Bachelors in history and political science in Münster; after a year of internships he currently is a graduate student in Göttingen. He enjoys meeting new people, having discussions and fun together. Gregor is always delighted when he finds nice postcards in his letter box – they have got a place of honour in his room.
Tags: Borders, Exile, WWII
Share This Post
You May Also Like

#callVienna: Election Time in Austria – Why I Voted for Hofer or why Van der Bellen is the Lesser Evil
20. May 2016
Previous ArticleEuropean outside Europe. Part IINext ArticleMany Shades of Left – Autonomously Green Athens
2 Comments