Written by Valeriia
from Russia, participant of the eCommemoration Campus 2020 »Beyond the Crisis«.

Once the hero city Volgograd was a garden city with its own unique history.  Since the beginning of the 2000s, Volgograd fell into desolation, and then became the object of experiments of businessmen and authorities.  This is the story of how people interested in money destroyed the old look of the city and turned it into a dirty industrial town. 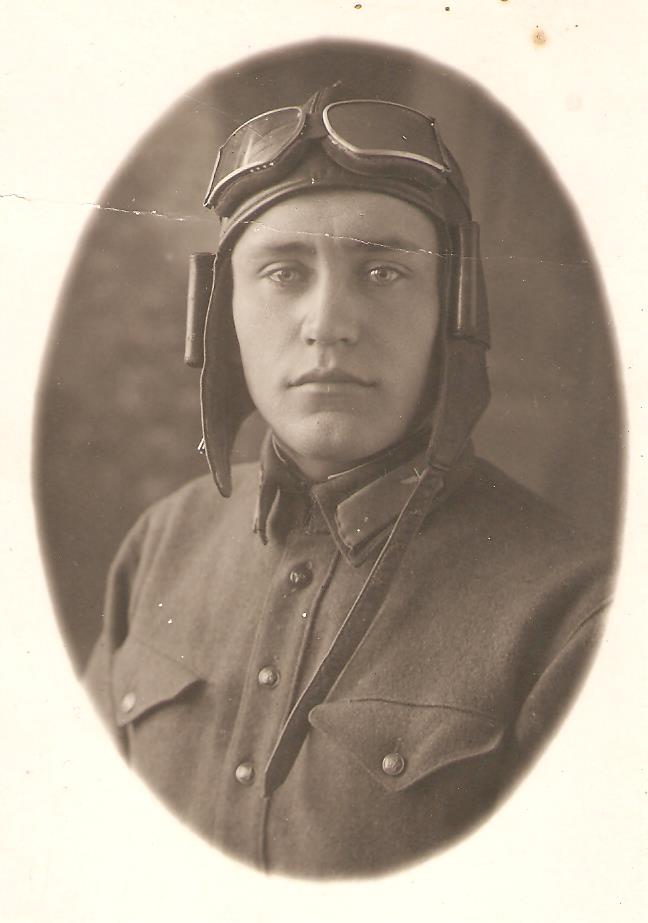 Valeriya’s grandfather in the early 1930’s in his military pilot uniform.

My grandfather – Mikhail – was a military pilot and managed to go through many battles in his life. He visited lots of places, but fate decreed that he received his last appointment in 1960 in Volgograd. It was still a glorious hero city back these days.

A year later Mikhail retired and took up environmental activities. It was still a long way from the collapse of the Soviet Union, but even then my grandpa saw how things were changing – not for the better. He was mainly engaged in scientific activities and advocated the correct use of natural resources. Now he would be called an eco-activist.

As the country began to fall apart, my grandfather’s health was also getting worse and worse, as if he was leaving with the era he lived in. As my mother used to say, he didn’t want to see the end of everything that was built by the Soviet Union. This also applied to the decency of people.

He did not see the collapse of the Soviet Union. This also means that, unfortunately, he did not live long enough to see me born, although, as my mother says, he really wanted to see me. Later, my mother and our relatives and friends will often say that I am a real copy of my grandfather. His love for nature, his heartache, his desire to save and improve are some of the many things that have passed on to me.

And it is me and my mother who have to see every day what he was afraid to ever face.

So I was born in 1997 and found the early 2000s. These were times of complete disorder and the beginning of desolation. Everyone was busy with their own business: the authorities stole, ordinary people plunged into a culture that was previously officially closed to us. The issue of ecology in our city was always discussed very quietly and was not brought up for a wide audience. In fact, every green space in our city had to fight for its own survival.

In fact, the first case of systematic destruction of parks in our city happened right next to my house before my eyes. Earlier, crossing the road, you found yourself in a small park, still green and well-groomed, and then it was partially cut down and a cinema was built. Parts of this park were preserved, then partially filled in with concrete – a subway appeared there.

Our city is famous for this “underground tram”. Someone calls it the subway, but it’s not quite a subway, there are only five underground stops, and then the tram emerges from the tunnel and travels above the ground, as it should be. So, just one such stop was built near my house and some of the trees, of course, were cut out. And now those trees and bushes that remained in front of the cinema are being cut. Pruned by people who do not know how to properly prune trees and bushes.

And about three years ago, at the corner of the street, they cut a willow by the root. Apparently, it interfered with the passage. It had a spreading crown. Taking into account that there are some problems with watering in the city. In the city on the river. Ironically, right? Our willows grew well, but now I can barely count ten willows all over the center.

In general, then the city council started working with the opposite side of the street. Part of the park was destroyed, and a shopping center was built there. By the way, it was not just a park, it was a square named after Sasha Filippov (he was a scout, a hero of the defense of Stalingrad). There is a monument to this hero in the park.

But at first all these transformations were carried out slowly, that is, I managed to finish school while they were building a “second city center” in our area. They began to partially prune trees in other areas, just random events – that’s how it looked. The parks were abandoned. The irrigation system remained from the Soviet Union, and since no one was going to maintain and improve the infrastructure, everyone was busy filling their pockets, the parks fell into disrepair.

But they somehow managed to survive. These activities were called “rejuvenation” the green zone. But people just cut off all the branches from the trees. It looked like a row of tall stumps along the road. Fence. The public was outraged, but either their efforts were not enough, or everyone did not care. And then the year came when Volgograd hosted the World Cup. The authorities have made our city a million-person city. (There is a version that the authorities annexed part of the Volgograd region.) The city received funding. 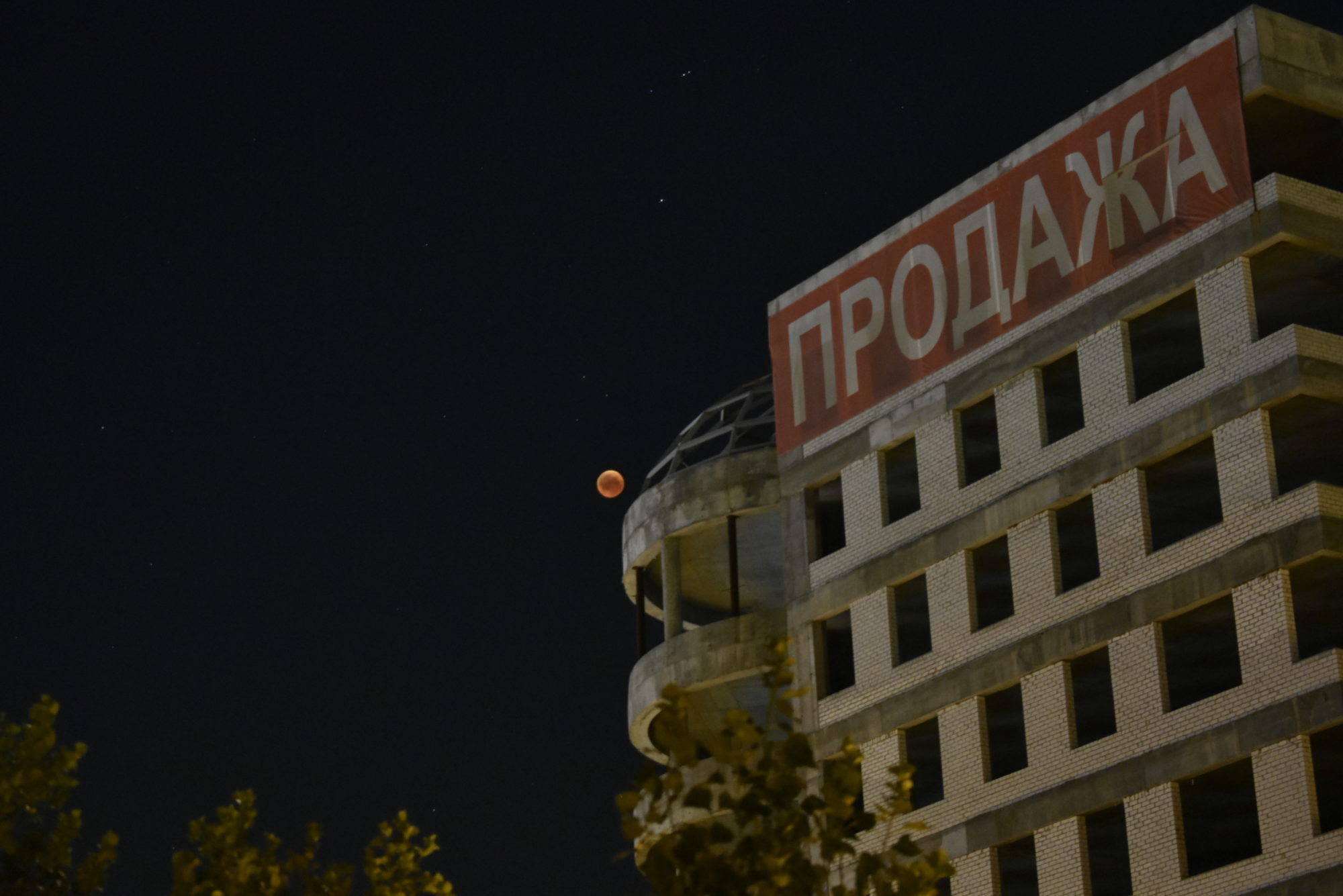 At the same time, a large-scale improvement program began. The governor promised beautiful parks, new roads, recreation areas. But it turned out very funny. We have a train station in the center. And there is one airport per city. It turns out that football fans could enter the city through these two points. Then they were settled in hotels in the center. By the way, there is such a hotel near my house. And for some reason they began to build another one two or three years before the championship. Well, it’s built, has no cladding and is still on sale. And there is a hotel – fifty meters from the first hotel. More hotels for the hotels god!

Returning to the topic. From the center, the fans went to the stadium. It is not far from Mamai Hill. That is, they had to travel the entire center, the entire central embankment to get there. Therefore, it was decided to improve the entire area. New roads have been laid. The sidewalk tiles were enough for half the entire road. The rest of the road remained broken.

But if you can still walk through the holes, then you need to breathe something, right? Parks are the lungs of cities. The government has launched a park reconstruction program. I will not go into details yet and talk about all the violations that they arranged. But the most scandalous case is the case of the so-called “park of widows”. 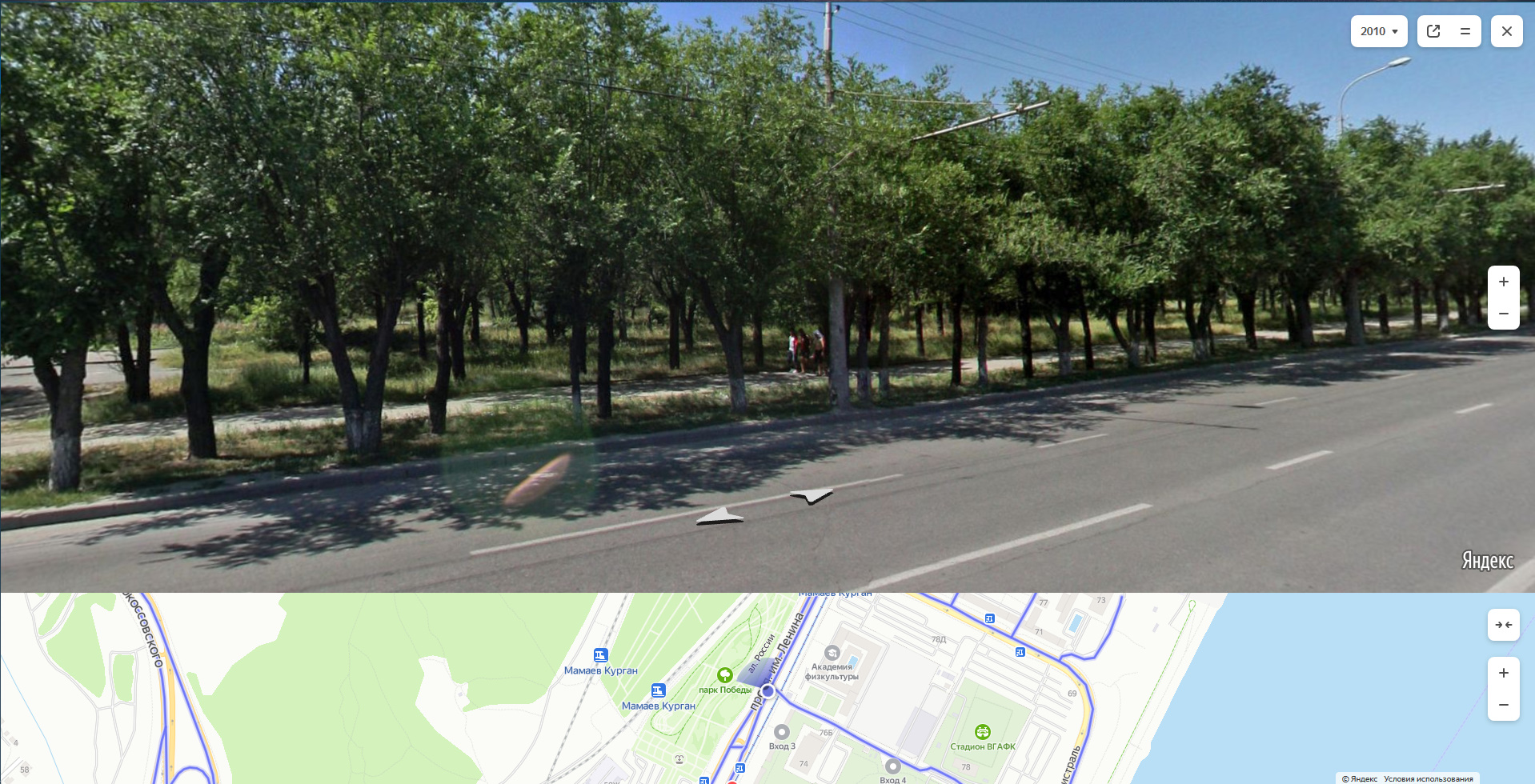 All newspapers wrote about it. This is not just a blow to parks, it is a blow to memory. We’re a hero city, remember? This park was founded by the widows of the defenders of Stalingrad. There were several tablets and a memorial stone in the center of the park. It read: The memorial park was founded in the fall of 1965 in honor of the Soviet soldiers who gave their lives in the battle for Stalingrad. 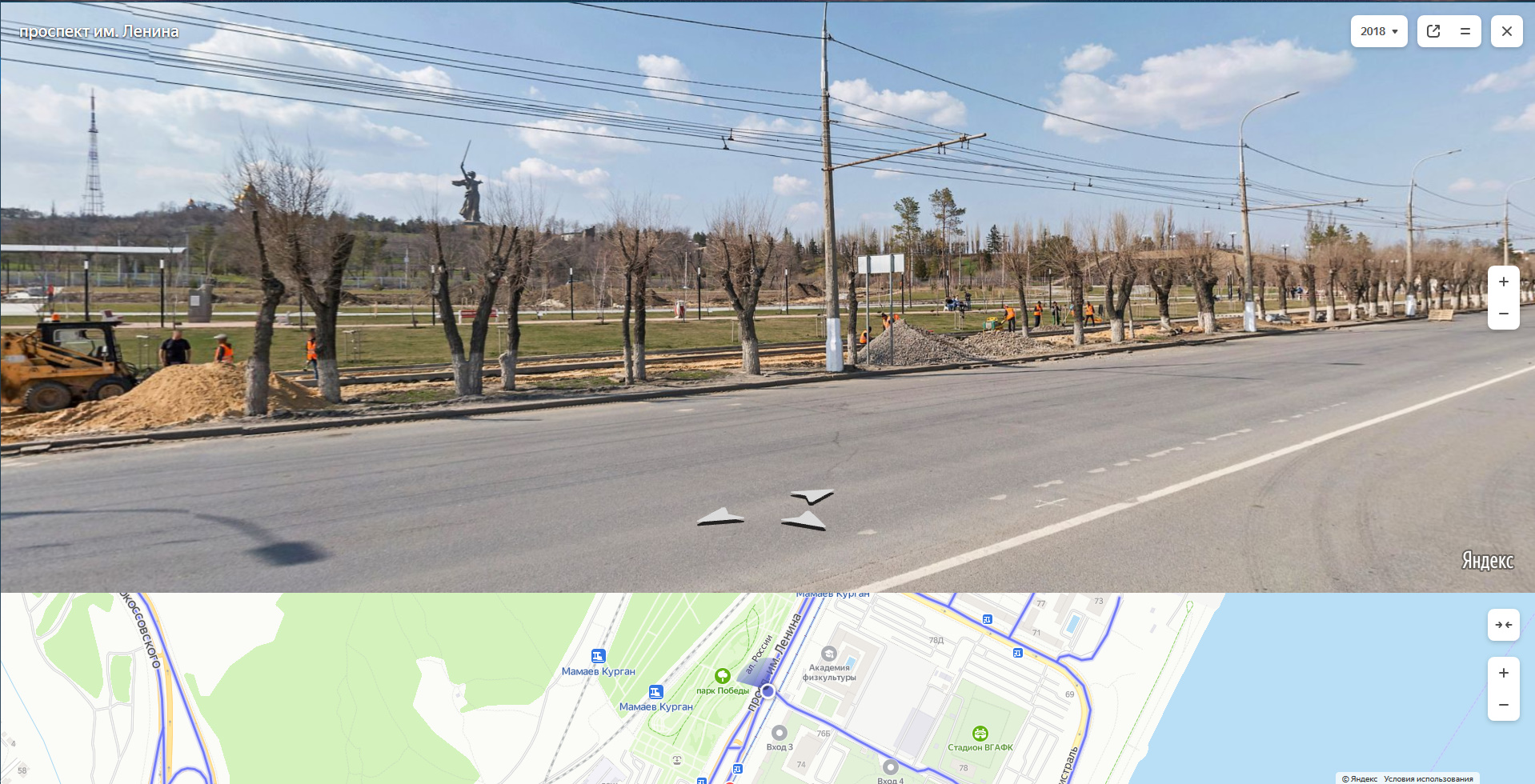 A new park is built (Credit: Screenshot from Yandex).

Isn’t it proof that this is not an urban legend? But one of the leaders of the Battle of Stalingrad Museum said that in fact there was no park, because there is no archival data about it. Considering that we are pursuing an anti-Soviet policy, it is not at all surprising. Lying or even destroying documents is not a problem.

In addition, the famous singers Kristalinskaya and Zykina and the poetess Inna Goff denied the officials’ words. Because Goff wrote poetry, and the singers sang a song about this park. The song was written for the 25th anniversary of the victory at Stalingrad. Unfortunately, all three women have long been dead and could not defend the story personally.

All that had to be done was restore the irrigation system and improve the paths, remove old, dead branches from the trees. Instead, they made a bald park with “new trees”. First, this park will still have to grow. Within three years Moscow Zaryadye began to look like a normal park. And ours is still a row of young weak trees. Plus, you need to understand that not all trees grow in our latitudes. We had lilacs and willows. They grew even without watering. What they planted – I don’t even know, but it doesn’t grow. Secondly, they destroyed the memorial park. Which people planted with their own hands in memory of the victims. Thirdly, although the plants have been planted, the animals that lived there cannot be returned. There lived hedgehogs, woodpeckers, and nightingales. Many of them.

The second big transformation was the transformation of the former floodplain of the Tsaritsa River into a modern walking area. It was assumed that paths would be laid there, the irrigation system restored, fountains made. The students of the architecture university created plans for the future park, and people had to choose the best project. But in fact, the implemented project was far from planned. The floodplain was hastily cleared of green spaces, the construction of an interactive museum, recreation areas and other attributes of a “modern park” began. 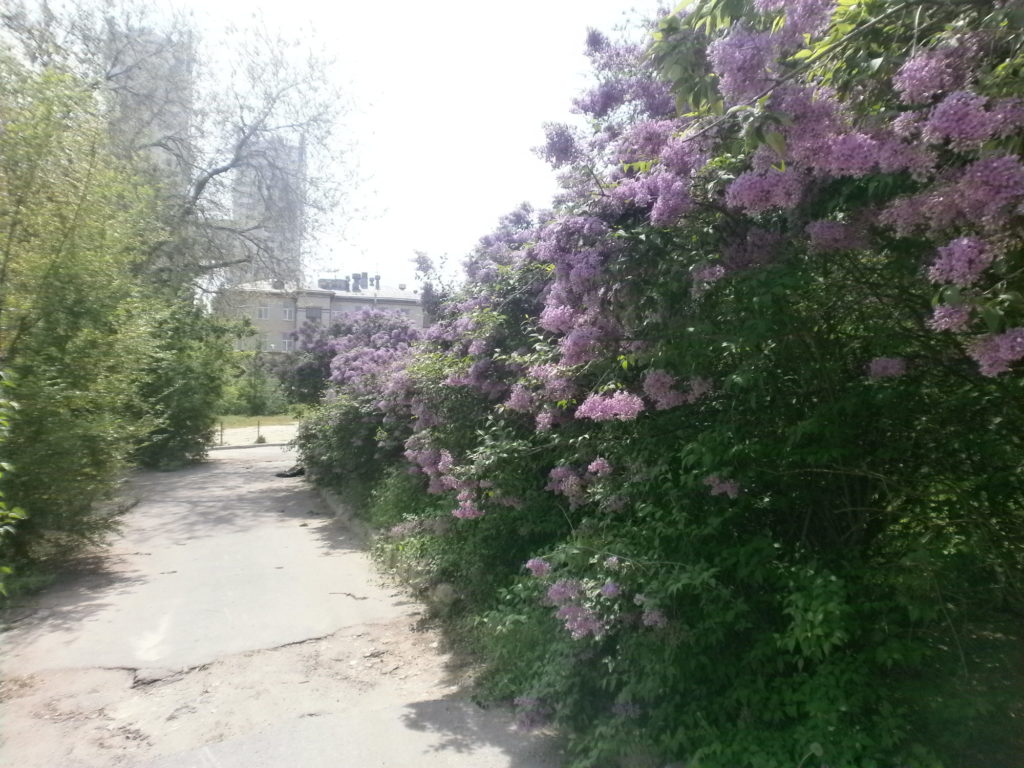 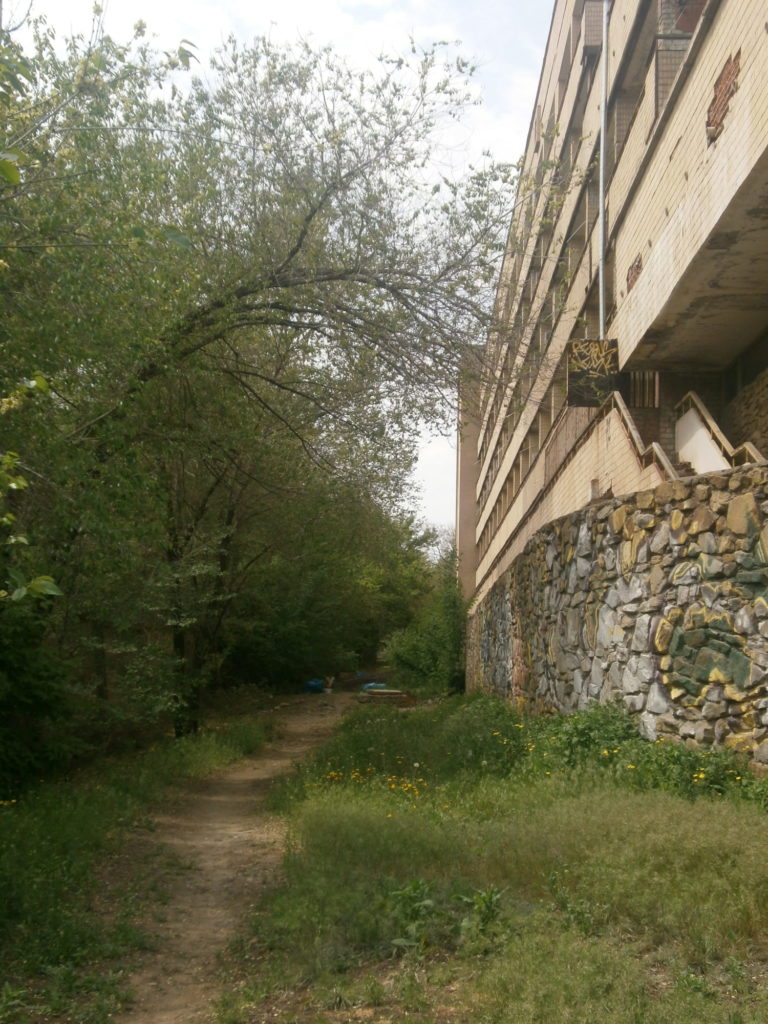 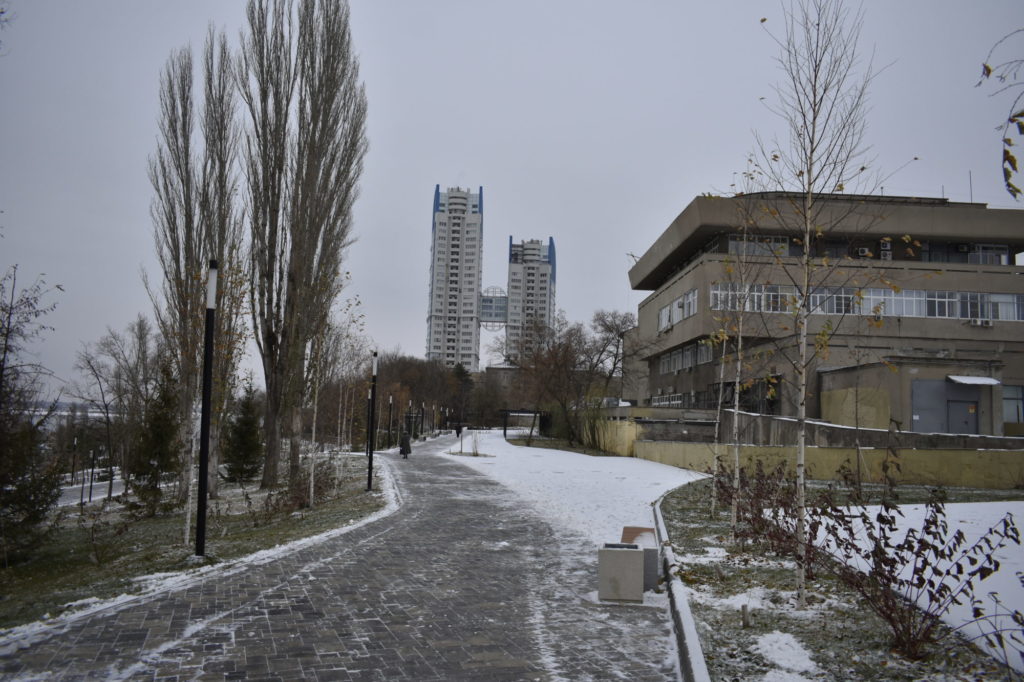 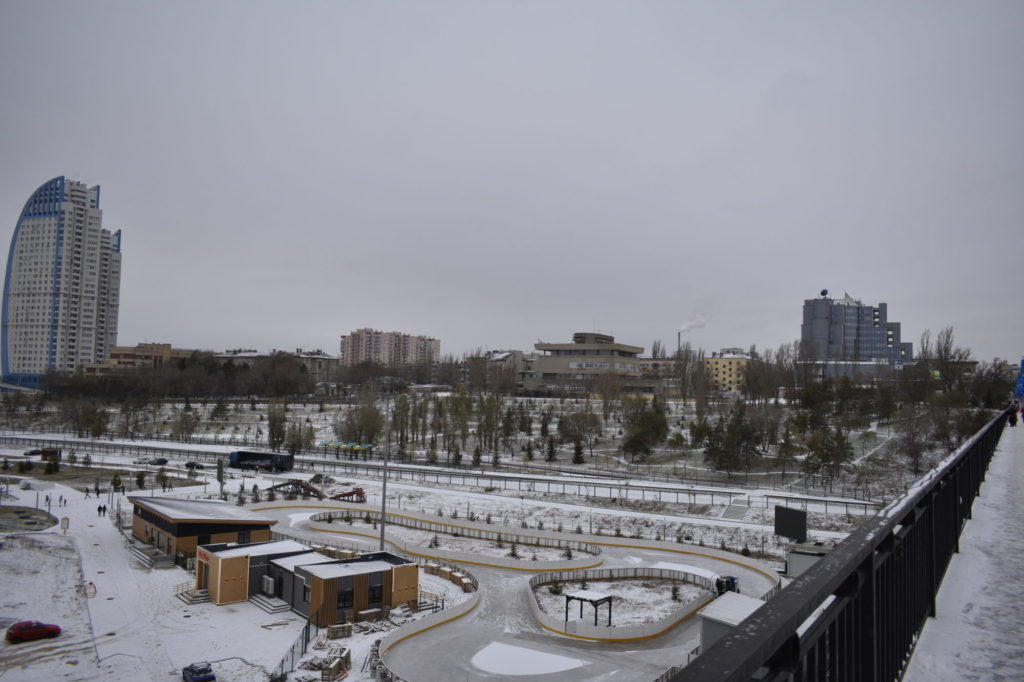 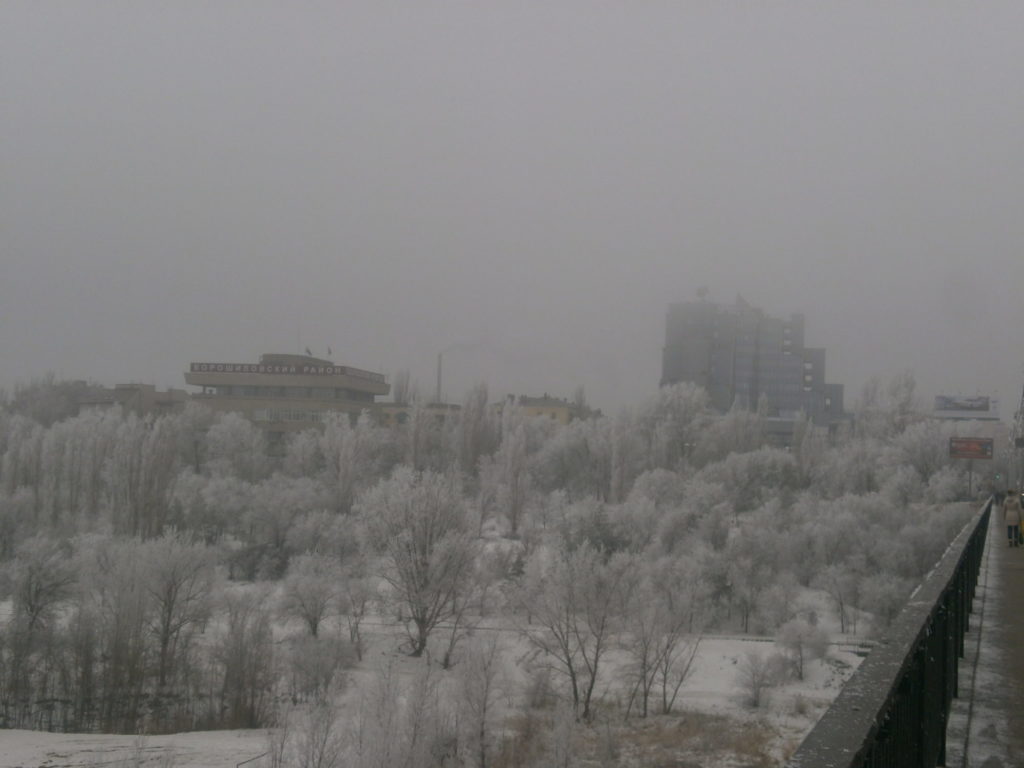 Most of the trees and shrubs were found not viable, cut out and replaced with small seedlings.  Many birches have appeared.  Unfortunately, birch trees do not tolerate our unstable climate (you also won’t like the 50 degrees and more of heat in the middle-summer sun), so at best they will remain weak and small. Many of the promised buildings haven’t yet been erected.  There are still mountains of rubbish near the museum.

Once there was a small football field – two goal frames and a pile of sand, but children loved to play there.  There was always a shadow in the floodplain, which was very helpful in the heat.  Mom often took me there for walks.  In late summer we picked currants and apricots.  When I was younger, we often went down to the railroad.  Before the bridge over the floodplain was built, the tram traveled along those tracks, and the “children’s” railway was like a reminder of those times.  The machinists let the children into their room and let them honk the horn.  Branches beat on the windows of the carriages. 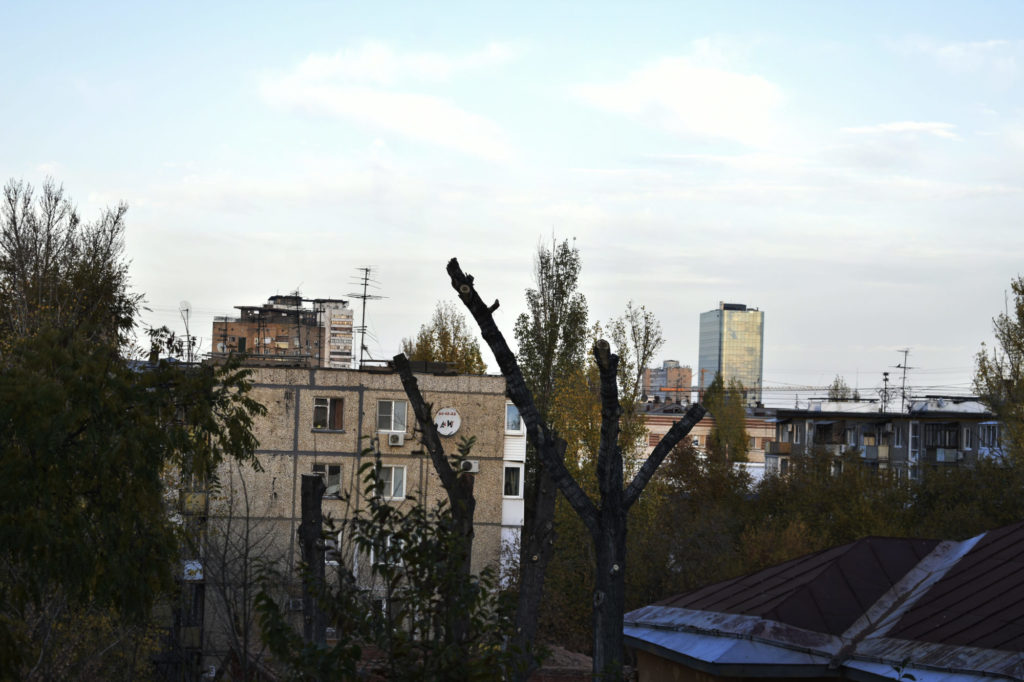 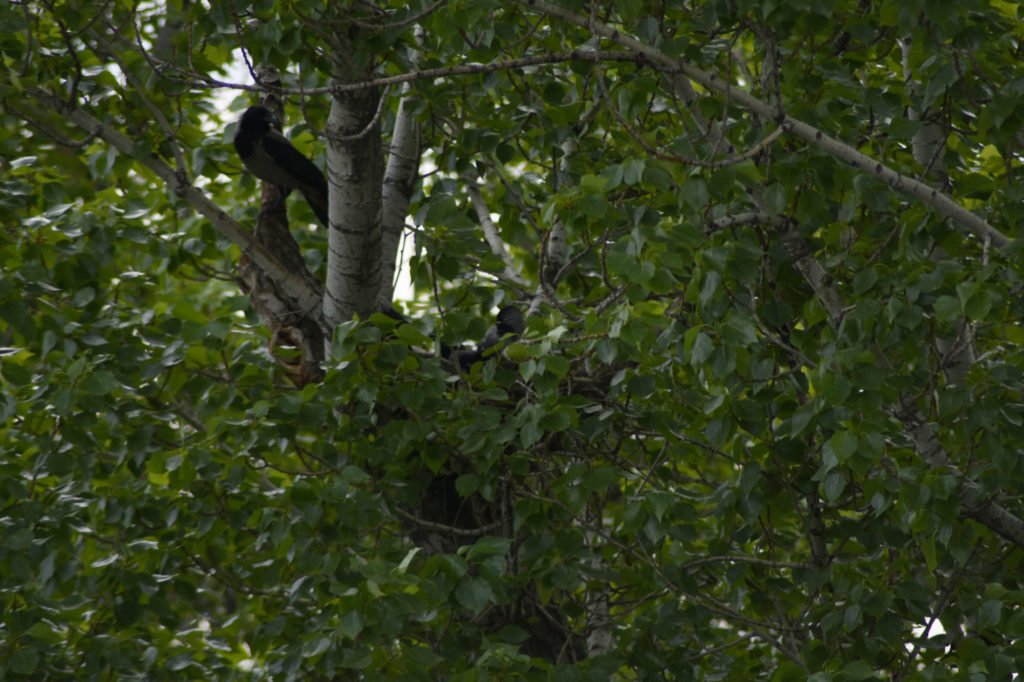 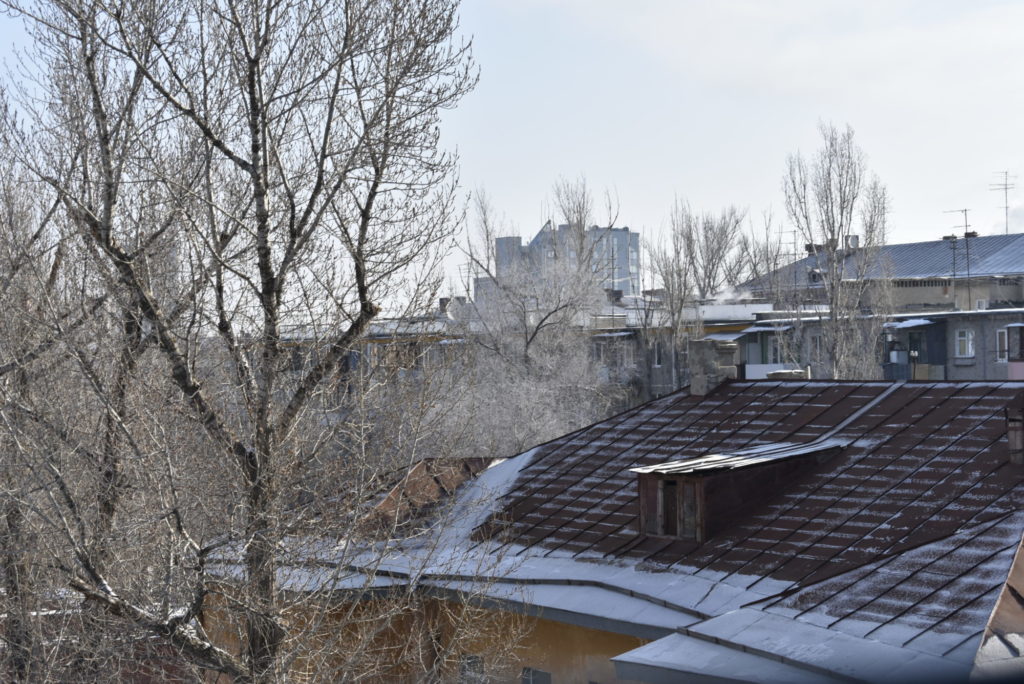 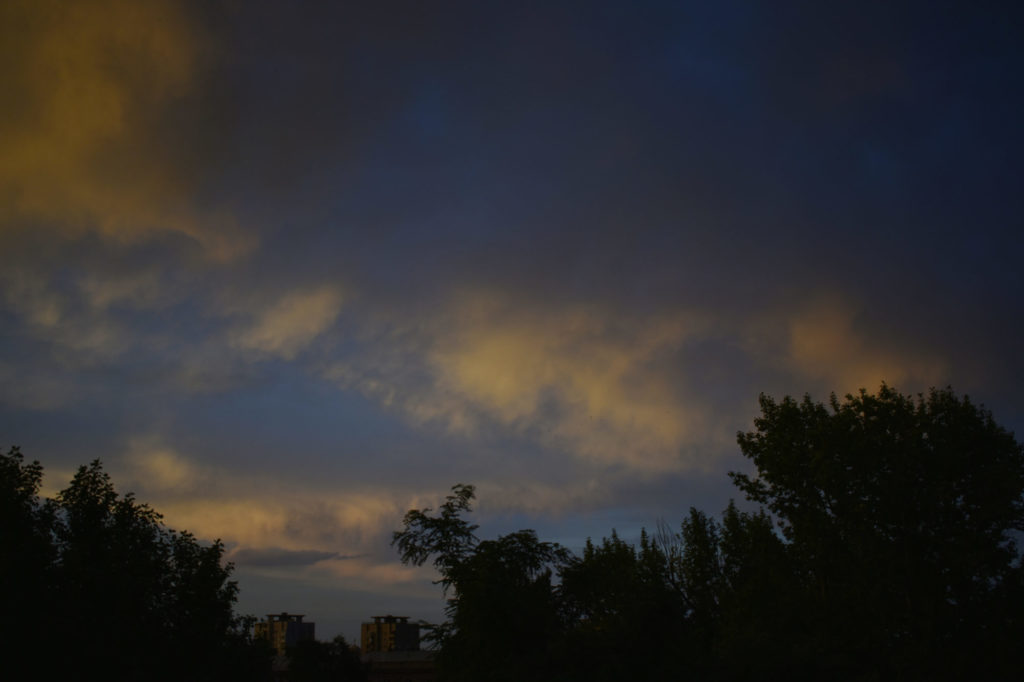 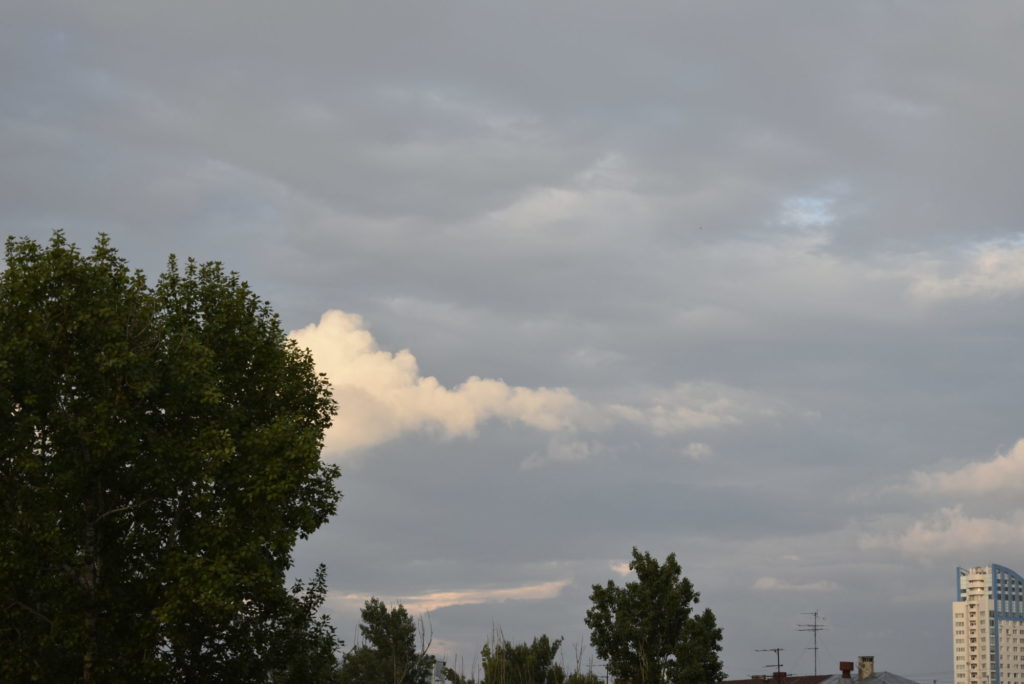 To top it all off, in November something happened. Something that I had feared for a long time.  The poplars that grow in our yard have already been cut off once.  There was a nest of falcons, but after that incident, the falcons flew away and never returned.  The yards in our area have gradually thinned out over the years.  Finally somebody – whoever it was – got to our yard.  For two or three years there was a crow’s nest on one of the poplars, but now they have nowhere to return.

Now I can’t stand looking out the window. In other words, I was born in a hero city, a garden city. Now it is a cesspool. The worst thing is not the impunity of those who did it and is doing it with our city. But the fact that some citizens believe that this is how it should be, that this is normal. There is simply no one to defend our city. 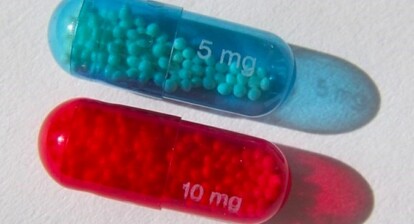