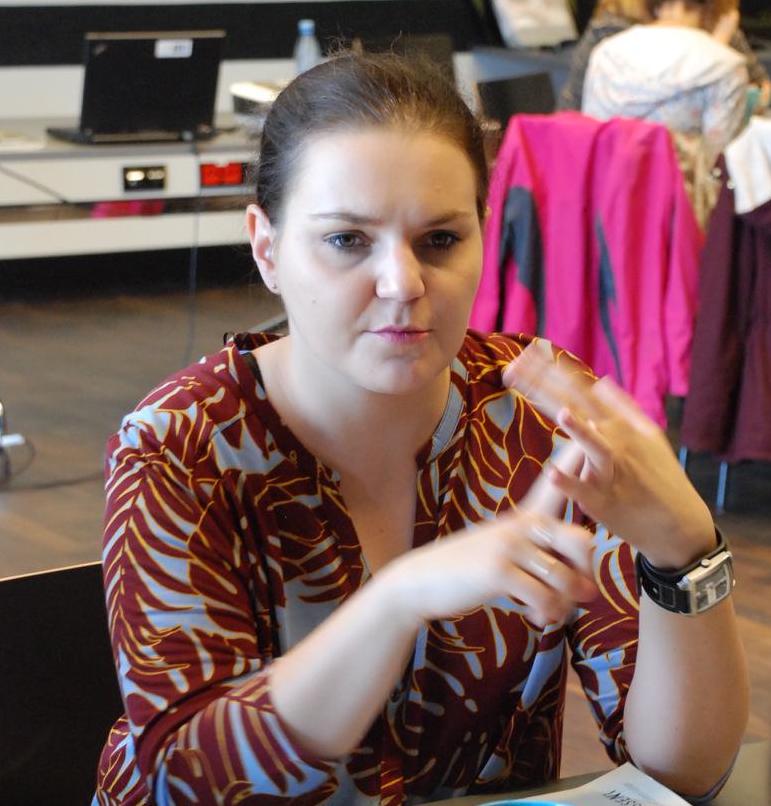 Written by Paulina
Paulina is an ethnographer, Russian philologist and graduate of East European Studies at the University of Warsaw, Poland. Now she is a PhD student at the University of Gdansk. She lives partly in Kaliningrad, Russia, from where she writes a column for Gazeta Wyborcza Trójmiasto

Citizens of the Russian exclave Kaliningrad make a special case in the Russian-Polish relationship. Paulina Siegień regularly crosses the border between these two worlds, working for the local media in Kaliningrad, as well as in Gdansk on the Polish side. She spoke to young Europeans from the EUSTORY network about the current tensions between the two countries and their impact on the region.

HISTORY CAMPUS: You call yourself a »transregional journalist«. What do you understand by this?

When I went to Kaliningrad for the first time, I was conducting field research for my ethnography studies. I enjoyed the time there, met a lot of people and learned Russian. In 2012 I moved to Gdansk, which was the time when the Russia-Poland agreement on local border traffic was agreed upon. The agreement applies basically to the entire Kaliningrad region. Once the residents of this territory register for the local border traffic they are allowed to entry and exit on the territory of another country. This allowance was relatively easy to obtain and was initiatory issued to residents of border territory on a 2-year term. For people in Gdansk, Kaliningrad had been a black hole on the map until then. But they got curious about their Russian neighbors. Since I knew Kaliningrad well, I started writing about it for Polish media. On my regular visits to Kaliningrad I was approached by their local media and they asked if I wanted to write something about the Polish side as well. Suddenly, I worked for the local media in Gdansk AND in Kaliningrad.

HC: What were the people on both sides particularly interested in?

Generally, people were very interested in local topics. These two cities are very different and this made people curious. For example, in Gdansk, you find well-developed local and civic structures; also, if the mayor has an idea, he can basically realise it without asking Warsaw for permission. People in Kaliningrad wouldn’t believe it: with the military basis their city is in a very strategic position and local decisions will always need clearance from Moscow.

But also topics such as sports are interesting for my readers. One of my first pieces was on the Football World Cup in Russia. Gdansk had just hosted the European Championship and the Poles were interested to see how Kaliningrad will accommodate for the matches etc. People in Gdansk wanted to know how their neighbours felt about and organised such an event.

Surely, there are also some people from Gdansk who just cross the border to compare prices and to find out if they could have a nice, cheap shopping day »on the other side«, but I always had the impression that – more than just to that – people in Gdansk and Kaliningrad felt connected in a way and appreciated their neighbourhood.

HC: Are these well-developed local ties stronger than the tense relationship between Moscow and Warsaw?

On the political level, I would not say so. The local relations are still influenced by the binational tension, even more so in Kaliningrad.

But just this proximity, a mere 150 kilometres between the two cities, makes this relationship very important for the people on a civic level.  Sure, there were some provocative reactions when Russia annexed Crimea. I remember one restaurant owner in the Polish border region who put up a sign reading »Not serving Russians«. Obviously, Poland is still a democratic and free country and you cannot discriminate against one nationality in your shop. A lot of Poles felt this discrimination is inappropriate. But still they wanted to show support for Ukraine, in the end they just did not know how.

On the other hand, in Kaliningrad there were rumors that Russians have been attacked in Poland at that time, I believe that was an attempt of the local authorities to make people feel afraid and not leaving Kaliningrad anymore – for political or economic reasons, who knows.

But the opportunity to go »to the other side« easily helped a lot to overcome these tensions because, even though it might be just for cheap gasoline or similar, people got in touch on a civic level, they interacted.

It is very problematic for this region that the free local border traffic agreement was halted in July. The Polish government said it was for safety reasons due to the Pope’s visit and the NATO summit. This suspension was announced and realized on a very short notice, only three days, which was surprising and very unlikely for a political process. As a reaction, Russia officially suspended the agreement as well. People in both countries were taken aback. I wrote critical comments about it, because it is a pity! The agreement had worked perfectly and people cherished it a lot. Unfortunately it remains suspended.

HC: Are there any prevailing stereotypes on either side?

If you find stereotypes, it is more likely on the Polish side, I would say. They did not know much about their close neighbours before the border agreement and felt the Russians from Kaliningrad would for example suffer from poverty and were narrow-minded etc.

In fact, it was a bit different: People from Kaliningrad travel around Europe, a lot of people have Schengen-visas and there was a good economic development, due to the oil prices.

HC: During EUSTORY´s History Camp you met young Ukrainians, Poles and Russians who worked and traveled together for several days. How did you experience their relation to each other?

In fact, they wanted to talk about the issues that matter in their countries’ relationships. At the beginning you could feel that things would have to be addressed at some point, there was a certain tension. For example, for Ukrainians it is important to hear what people in Poland think about the conflict with Russia. But what I appreciate a lot is that the students found their ways to talk to each other in a respectful way, they truly are responsible young citizens. I believe, in a youth encounter like this History Camp, in the grass-roots encounters as well as in international relationships, what really matters is dialogue.

You can find a German translation of the interview here

Written by Paulina
Paulina is an ethnographer, Russian philologist and graduate of East European Studies at the University of Warsaw, Poland. Now she is a PhD student at the University of Gdansk. She lives partly in Kaliningrad, Russia, from where she writes a column for Gazeta Wyborcza Trójmiasto
Tags: Borders, Conflict, Kaliningrad, Moscow, Neighbours, Poland, Russia
Share This Post
You May Also Like

The Threads of Resilience – Experiences of 4 Women
14. December 2020
Previous Article@work in Tbilisi: Discovering Differences and SimilaritiesNext ArticleIf You Could Bring Back One Item from the Times of Czechoslovak Socialist Republic (CSSR) What Would It Be and Why?