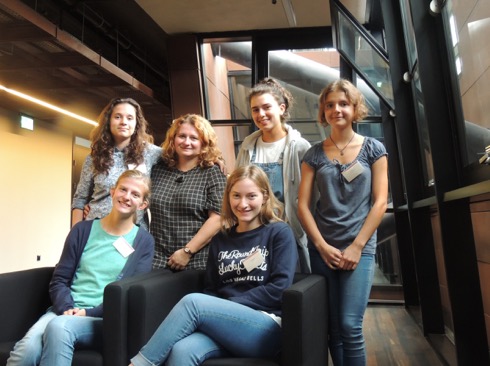 Written by Adelina
Adelina was born in 1998 and lives in Sliven, Bulgaria. She is currently in her last year at high school, where she studies Maths and IT, though her academic interests are in the fields of English and History. In the future, she would like to study International relations and Political science. She is a huge movie enthusiast, enjoys reading books, listening to music and watching football.

With freedom of press endangered in many parts of Europe and the work of independent journalists becoming harder and harder we wanted to know first hand what it is like to work as a journalist with an interest in human rights and female empowerment in today’s Poland. Five of our young journalists met Iwona Reichard, Deputy Editor and Lead Translator of the New Eastern Europe in Gdańsk and talked with her about the media landscape in Poland and journalistic values/ethics.

”The most reliable filter a journalist can have to distinguish between propaganda and truth is their moral compass”, says Iwona Reichardt. It should not be calibrated by anything or anyone else, but their personal beliefs. This goes both for young and experienced journalists, states the Deputy Editor and Lead Translator for New Eastern Europe (a bi-monthly magazine, published in in Poland but for English-speaking readers). She also believes that the most important value a journalist should always uphold is objectivity. In her opinion, interpretation, as needed as it is, should never get in the way of presenting the truth by mixing facts and fiction to satisfy a political agenda. Unfortunately, she says, the tendency to present ”no news, but views” is today largely in practice in Polish  media.

Using her magazine as a platform to educate people on an international level, she succeeds in raising awareness of pressing issues and inspiring young women across the world to fight for their rights. Her experience as a  researcher and an intern  with Foreign Policy Magazine  in Washington DC has  shaped her personal ethics to the extent that she realises the importance of the media in shaping the predominant characteristics of a society. With this in mind, she aims to break negative stereotypes through her work and shatter the glass ceiling that exists for women in the workplace.
As a strong  supporter of human rights, Reichardt stands for the empowerment of women as well, especially in Poland, where, according to her, women’s rights were  a sacrifice that was  made on the way to democracy. Due to the fact that the older generation neglected to raise their children in a liberal manner, the youth of Poland are now  more conservative than  before. This also is impeding the implementation of a system of equality and social justice in the country.
Having been  strongly aware of  the presence of sexism, she has the personal experience of being undermined by her superiors because of her gender. Although many women nowadays opt for an aggressive approach to establish themselves, she believes that a woman should never have to alter her personality to fit in or be respected by her male co-workers. Female representation is needed, because women are an essential part of society and as such, they should be valued as equals and judged on their qualifications, rather than on their appearance.
Her greatest concern lies with the fact that the Polish media severely lacks diversity in gender, race, religion and sexuality. This internal homogeneity has, in turn, hindered its liberalisation. As a direct result of that, Polish journalists have been denied the possibility to recalibrate their moral compass through collaboration with people with different cultural backgrounds.
Asked on perspectives, her outlook sounds grey when it comes to the immediate future: ‘‘The European dream of the 89’ generation seems more and more distant with every disagreement between the government and the European Union on the future course of action.” However, she remains an optimist, believing that crises may also bring positive changes.

by Adelina Fendrina and Elin Reese

Three more young journalists wrote about the interview with Iwona Reichhardt, you can find their articles here:

About Journalism, the European Dream and Diversity by Vida Pluym, Ema Agnič

#CallNetherlands: Elections in the Netherlands – end of EU as we know it?
8. March 2017

A Second Look at Right Wing Poland
3. July 2019
Previous ArticleUnited in Diversity? Identities in EuropeNext ArticleRallying for the Reconquista – Incognito among the Identitarians