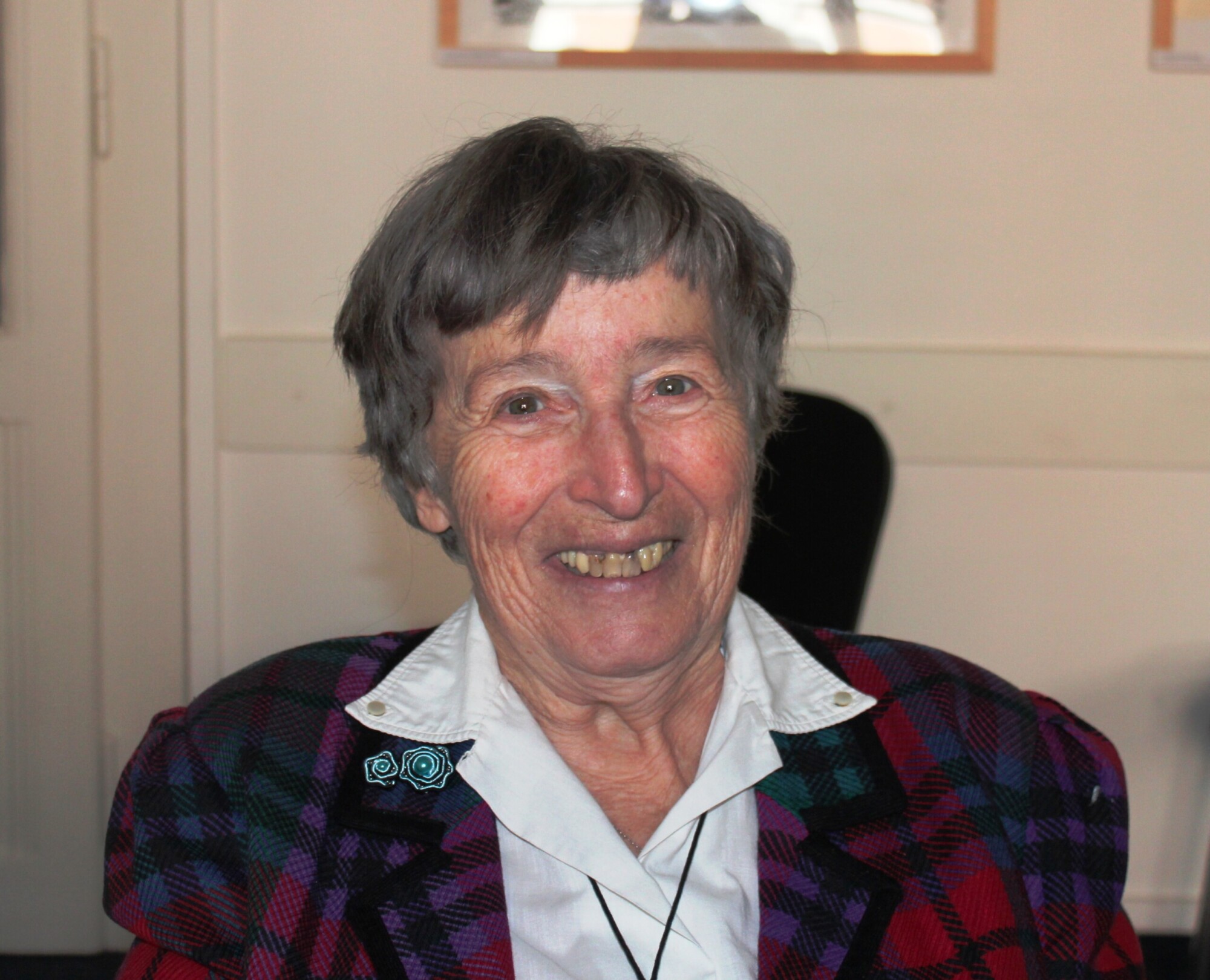 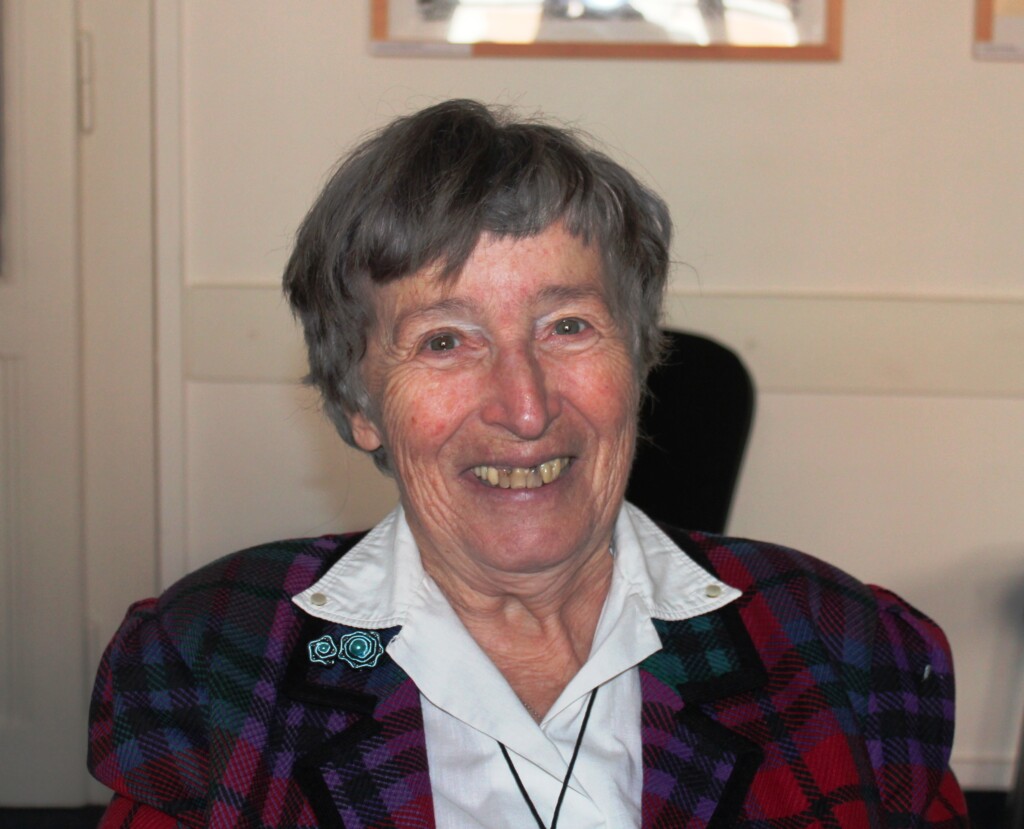 Michaela Vidláková did not have the childhood you would wish to have. She and her parents were imprisoned in Terezín (Theresienstadt), because they were Jews. They were lucky; the three of them survived, but exclusion and internment strongly shaped Michaela’s attitude towards life. Haris Huremagić had the chance for an interview.

Haris Huremagić (HH): What do you remember from your childhood under Nazi-rule?
MV: My first memories go back to my fourth year of life. A child only remembers what it affects. The first thing that affected me was exclusion: I was no longer allowed to play with my Czech comrades or to go to the park. All of a sudden I was excluded, thus, very lonely, and only among adults. Father was kicked out of his job as a technical director in a fur factory and found something as an overqualified worker in a carpenter’s workshop. My mom was a teacher in the Jewish school in Prague and worked in two shifts, because Jewish children and teachers had been kicked out of public schools and so the Jewish one was crowded. My parents had not much time to play with me. I was always tired and bored because my grandmother’s stock of tales was very soon exhausted.
My second memory is about shopping: I remember we had to stand in front of a store for quite a long time, because only few shops were open to Jews. In addition, the time in which Jews were allowed to shop was limited.
The third thing was that we were kicked out of our apartment. It was confiscated for a German officer and we moved to an apartment in an old, neglected house, where three rooms were inhabited by three families.

HH: When did you come to Terezín?
MV: Terezín as a camp was already established in November ‘41. We were deported in December 1942 – just before my 6th birthday. My grandparents and many relatives had already been deported earlier. We did not have the chance to meet my grandparents when we came to Theresienstadt, as they had been immediately sent to an extermination camp.

HH: Did you know that your grandparents were deported?
MV: I knew that, and strangely enough, I always had a fever when someone from my relatives was deported. I do not know why, but this nervousness transmitted somehow to me as a child. 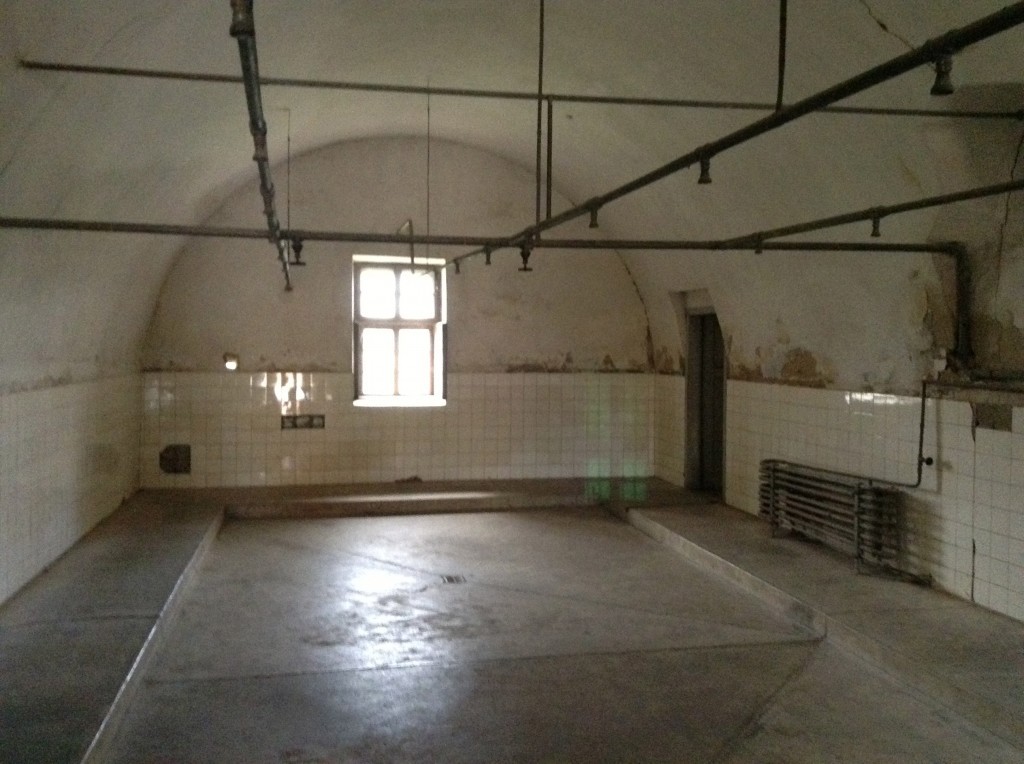 A shower room in Terezín Camp where around 100 people had to shower simultaneously. (Photo: Robert Desmond/London to Auschwitz/dezco.co.uk)

HH: How did you experience your detention in Terezín?
MV: In Terezín my father stayed in a men’s barrack, my mom was staying with the women and was put into the children’s home. We were very lucky that my father was on the so-called “protection list”, because he had worked in a carpenter’s workshop. He showed the toy that he had made for my 5th birthday as proof that he could really work with wood. Because of him being protected, my mom and I were protected, too. I was glad that I lived in the children’s home, because there I finally had comrades again and we had really devoted caretakers. We also had illegal school lessons. We were willing to learn, because it was forbidden. In spite of everything, we participated in the classes to prove that we were not afraid of the Nazis.

HH: Have you been in contact with comrades, who survived?
MV: The majority of them was transported into extermination camps, but after the war, I had contact with five comrades from Terezín, who survived. Many then emigrated, such as my dearest comrade, the son of Alice Sommer, the pianist from Terezín. She was a well-known pianist and died a year ago at the age of 110. Unfortunately, her son died much earlier. His name was Raphael Sommer and he was a cellist giving concerts all over the world. Another comrade became a neurologist here in Prague, another was an architect and one was appointed professor of nuclear physics at a Californian university. Almost all have found a pretty good and useful occupation in their life. What could have been out of those  who did not survive, we can only imagine …

HH: You have learned the German language from a comrade in Terezín …
MV: Yes, in the hospital. I fell ill with typhoid, measles and scarlatina – all at once, and was brought to the hospital, where I met a boy from Berlin. He was an orphan and a bit younger than me. We became friends, although he did not speak Czech and I did not speak German. I really do not know how we managed to communicate and to learn the language of the other. My parents would have been willing to adopt him, but after the war we have not found any trace of him, because he had been taken away by a transport to an extermination camp.

HH: How did your life continue after the war?
MV: We were liberated in May 1945. Actually, were lucky that we remained in Terezín until the end of the war, because since autumn 1944 large transports to extermination camps had been organized and suddenly my father was assigned to a transport. But his life was saved by a windstorm, which damaged a barrack’s roof. The SS-command ordered the prisoners to repair it before the train arrived. My father volunteered to repair the barrack’s roof together with two comrades. Before the work was finished, the train in which they were supposed to be deported had gone – it was the last train to Auschwitz. When my mother heard that father was assigned to a transport, she wanted to join the transport with me voluntarily, but father forbid that, and my mother obeyed.
We were really lucky and stayed in Terezín till we were liberated and returned to Prague.
In 1951 an atmosphere of anti-Semitism emerged and as a result, my parents wanted to emigrate to Israel, but of course, we did not get the permission. We tried to leave the “communist paradise” illegally, when I was 16 years old – but we were caught at the border and were sent to prison. Later, we were granted an amnesty. I was kicked out of high school. I passed the final exams at an evening school for working people and succeeded even to enter the university where I studied biology and chemistry to become a biochemist in a laboratory of a medical research institute. I got married and have a son, a nice daughter-in-law and a granddaughter. Finally I live in freedom. That’s the good end of the whole story. And that’s why I am a happy person now.

HH: How did you deal with your time in Terezín afterwards?
MV: I was a little child. What was difficult for me was that I felt the lack of Jewish children, to whom I got used to in Terezín. We had something in common and shared a lot, which was not the case with my Czech comrades. I missed these children as well as I missed my grandma and grandpa and all relatives, who did not return. That is the great void that affected me throughout my entire childhood.

HH: How was your relationship to Germany and the German language after the war?

A Memorial outside of the Terezín Camp. (Photo: Robert Desmond/London to Auschwitz/dezco.co.uk)

MV: After the war, I did not want to speak even a single word of German. My mom always used to say that we yet have to build bridges and that a new generation is growing up and they should not be encountered with hate, because it is not their fault. I understood that it was not the new generation’s fault, but I was not convinced that they really had a different opinion than their ancestors. In 1974, I visited Germany for the first time and met young Germans from Action Reconciliation Service for Peace (ASZ), working for reconciliation and penitence. Since then, I started to communicate with Germans and even made German friends.

HH: Recently many Jewish institutions were attacked, such as in Brussels, Copenhagen and Paris. What can be done to oppose that development?
MV: A difficult question. It is extremely important to educate people. Most anti-Semites have never met a Jew and hardly know anything about Judaism. This is a completely irrational anti-Semitism that has existed for centuries. Many media in Europe also have an anti-Israeli approach. Many people are convinced too easily. It is very important to oppose propaganda, to question everything and to search for truth.

HH: Thank you for the interview!

Written by Haris
born 1994 in Austria with Bosnian roots, student of law and slavonic studies, likes debating about music, philosophy, politics but becomes most passionate about historical topics.
Tags: Children of War, Concentration Camp, Interview, Terezín
Share This Post
You May Also Like 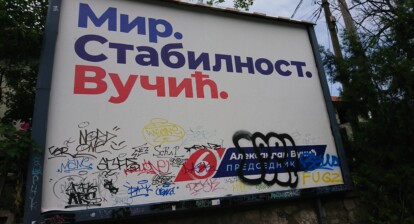 From Peace to Populism: How Serbia Became an Outlier
5. January 2023