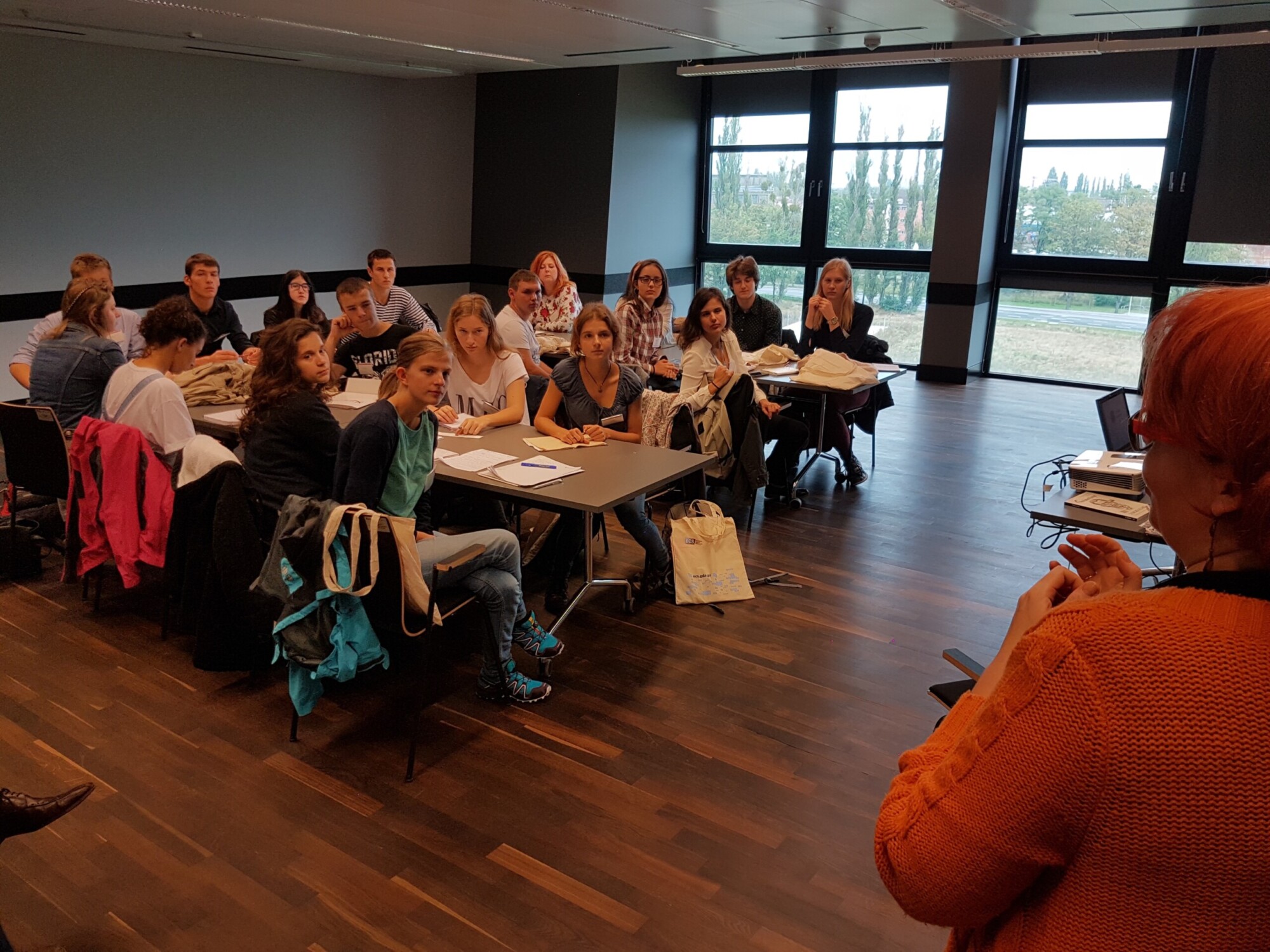 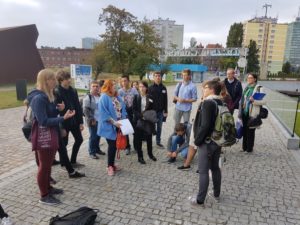 On their second day in Gdansk, our participants realized that the “Backpacking Višegrad” History Camp is slowly coming to an end. Saddened by this fact, but highly motivated, they began their day that promised interviews, media archives, a library… and ended with a very unique public performance.

The working part of the second day in Gdansk started at the ECS, which impressed our participants already yesterday. Thursday’s main agenda was putting all the acquianted journalistic knowledge to practice and trying out the questions prepared the day before. It was time to invest all the effort into getting the needed answers and information from the selected interviewees in order to be able to write either an Q&A interview, a portrait of the interviewee, or a comment. 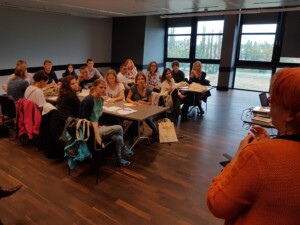 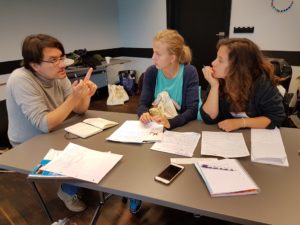 Getting the last tips from our journalistic consultant (Source: Eustory). 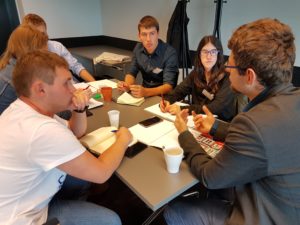 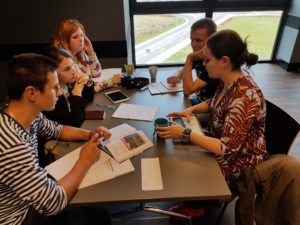 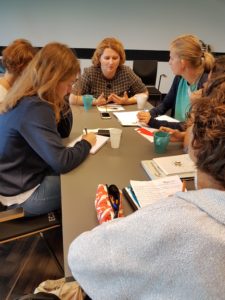 The just-before-lunch reflection on the finished interviews and the look at participants’ happy and smiling faces revealed that they genuinely enjoyed the interviews. Many of them later added, they were really inspired by their interviewee and thrilled to write about their life-stories and work experiences.

Solidarnosc in black and white

The afternoon part of the day started with meeting and talking to the director of the ECS, Mr Basil Kerski, who introduced the ECS and its history. Especially interesting information for our History Campus topic, was his emphasis of the role of media in general, and journalists in particular, in the Solidarnosc movement’s protest. 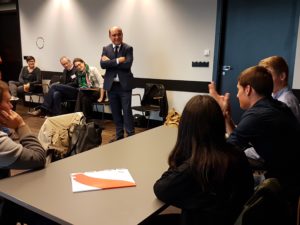 The importance of journalists and national-wide as well as international coverage of the Solidarnosc movement’s activities was visually presented to our participants just few minutes later, when they visited the ECS’s media archive and met its director. The director of the media archive, Ms Anna Maria Maria Mydlarska, showed the history campers the original, black-and-white (#vintage) footage from the Solidarnosc movement’s beginings and their negotiation achievements. 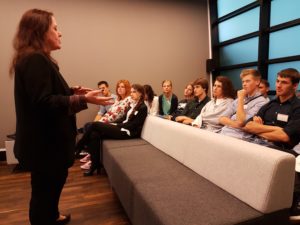 Browsing through the Solidarnosc’s remains

From the documentary footage our researchers moved to the impressive ECS’s library and later on continued their research in the archive. There they were able to look at the original posters and leaflets, as well as browse through the newspapers from the Solidarnosc’s rise and expansion period. 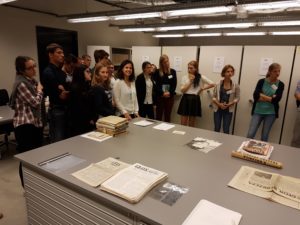 Enjoying the experience in the archive of the ECS (Source: Eustory). 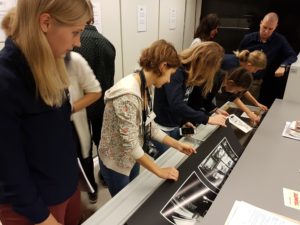 Browsing through the history (Source: Eustory). 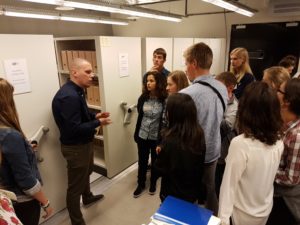 There was a lot of interest among our participants … (Source: Eustory). 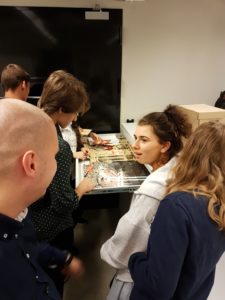 … and plenty of astonishment, after getting their questions answered (Source: Eustory).

After regaining some energy with the dinner, history campers went for a night walk through the streets of Gdansk. Their path ended on the square in the old part of Gdansk, where they united their voices and sang the old Katjusha song. Moreover, they were joined by a happy and visibly impressed passer-by, while other people on the square applauded and shared smiles with our participants. The singing performance was just the openining act of the rather artistic end of the day. Namely, from singing they turned to dancing. The day ended with the waltz, polka, sirtaki, attempts of kazachok and the kolo dance, plenty of laughter and pure joy. 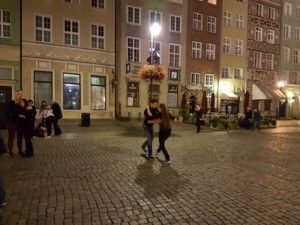 Waltzing on the streets of Gdansk (Source: Eustory). 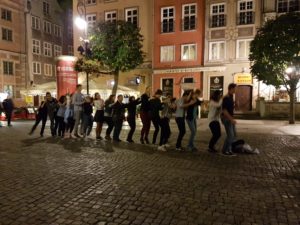 Just one of the many dances, performed by our adorable history campers (Source: Eustory).

Written by Tamara
Tamara (1990) comes from Slovenia, where she finished her bachelor in International relations and is currently doing her master in Management. To balance the more theoretical part she fills her free time with drawing, creating with wood and travelling.
Tags: Gdansk, Interview, Journalism, Media Freedom, Solidarnosc
Share This Post
You May Also Like 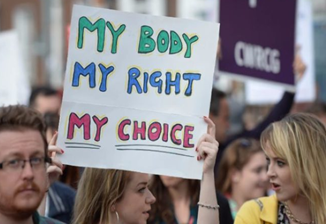 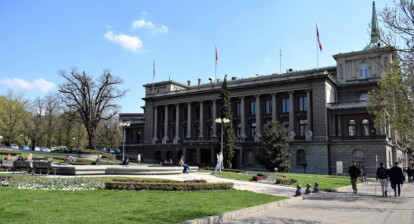 #CallSerbia: Presidential Elections: A »White Knight« Challenging the System?
28. March 2017
Previous ArticleLearning About Solidarity and Bloody Pacifications of ProtestsNext ArticleThe Pealing of Basilica’s Bells Between the Past, Present and the Future