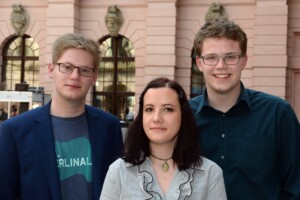 How did three young Europeans from Austria, Serbia and Germany experience the event at the German Historical Museum in Berlin on May 4th? Read their personal approaches in dealing with the historical legacy of parentlessness, expulsion and war atrocities suffered by children during the Second World War and their view on how this legacy and war-children’s experiences are still relevant today.

Milena compared legacies of war children’s experiences in post-war societies in Europe and asked herself: “Why were war children claimed, integrated, ignored or made silent?” Read her article “Where do I belong to? The issue of identity of war children”

Gregor caught the day’s atmosphere – and found inspiration for starting his own cross-generational dialogues: “Pig-potatoes and new homes – children of war shared their stories in Berlin”.

Last but not least, Haris describes how a single sentence by one of the speakers got stuck in his head and unexpectedly made him reflect aspects of his own identity “Who am I – Considerations after a Remembrance Day”.

Hoping that these very diverse articles with the common point of being extremely compelling are going to interest you too we are anxiously waiting for your reactions and comments!

Haris Huremagić
born 1994 in Austria with Bosnian roots, law student, likes debating about music, philosophy, politics but becomes most passionate about historical topics. Haris adores hot chocolate, you are free to invite him in Vienna.

Milena
Milena (1987) is a Eustorian from Serbia studying sociology. But her main interests are family history, ethnology, social interaction, and places where people gather like traditional pubs with historical background. She plans to travel a bit more and perfect the skill of traditional pastry making. She hopes to work for UNICEF one day.