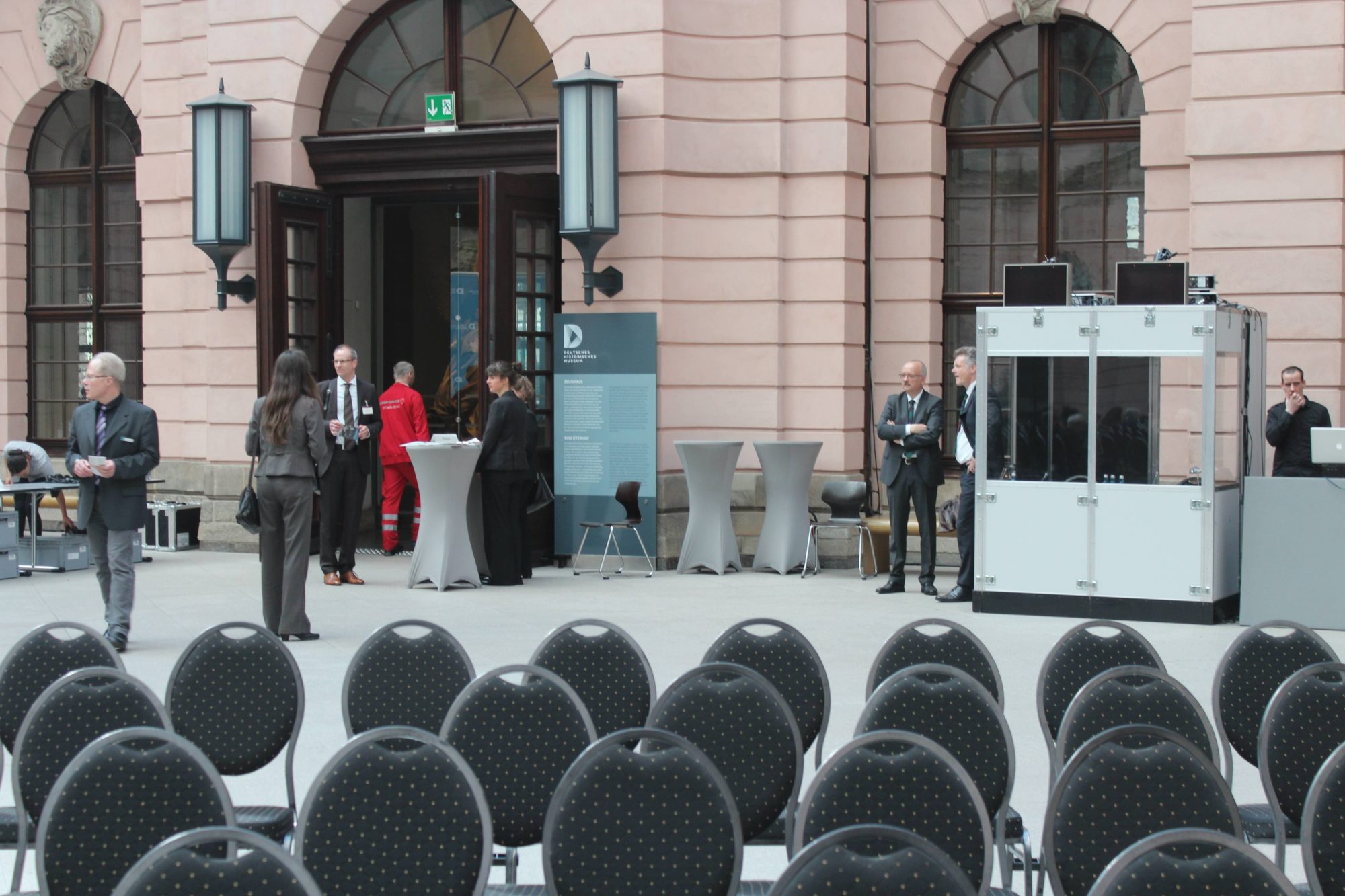 Gregor, a 18 year old history student from Germany, attended the Remembrance Day “Children of War in Europe” at the German Historical Museum in Berlin on May 4th 2015. He caught the day’s atmosphere – and found inspiration for talking with strangers about their childhood memories 70 years after the end of World War II.

In a few minutes the huge inner courtyard of the German Historical Museum with terracotta-coloured walls and a glass-roof should be filled by people participating in a European Remembrance Day on the issue “Children of War – The long shadow of WWII”. We shall hear a mixture of literally testimonies, scientific discussions and references to today’s exercises on the topic. I am waiting to hear how children of war have experienced being parentless, a target of persecution or living under occupation, since the titles of the panels give me this insight into the course of the day.

The microphone is checked, the final settings for the first reading and then – at last – the first visitors start to enter the hall. There are young people coming through the doors as well as older ones – the elder ones being in majority. It quickly turns out that people have found their way to the event for different reasons. “My father was seven years old and affected by the war. Together with my history interest this is the main reason for me to come here. I hope not to hear polarisation”, states a 40-year-old woman. A university-student wonders: “What are these country profiles offered in the program about?” but in general she is very looking forward to the event. – It should turn out that the different panels start with insights into personal experiences of war children, followed by experts who reflect war-children’s legacies in different European countries. 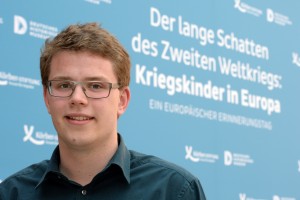 The gong rings in order to start the event. The Schlüterhof is no longer a silent, empty space. I notice that the rows of chairs have been filled by nearly 300 people – many of them because of their age were affected by the war as children personally.

A real “Child of War”

When I sit down on a chair, an elder security guy joins me. We start talking about the event. “Normally we have quite exclusive events going on here – government meetings or concerts by famous artists, so this is different”, he tells me. I want to know what he thinks about today’s event. It turns out that he also has a personal connection to WWII.

“I can really remember the end of the war. I am not sure whether Mr. Schäuble as one of the panel-guests is able to remember like me. When I was six years old, my mother and I were forced to leave our hometown in the Sudetenland by Czech soldiers. I remember their huge guns. First all people in our town had to go to Dresden. When we arrived there at a train station, we had to enter a train filled with ‘Schweinekartoffeln’ (pig-potatoes).”, he reports quite steady. Pig-potatoes – what? I am getting more and more interested in the man’s story. “Schweinekartoffeln are mushy potatoes – just good enough for the pigs”, the security guy explains. “They took planks and put them over the potatoes. Then we had to enter the trains. There were people sitting down even on top of the train-wagons. Some of them fell down, but nobody cared about this. The train took us to Brandenburg and we had to start a completely new life there with new neighbours at a new place.” The memory of a six-year-old boy who is now sitting next to me as an elderly man continues: “We never spoke about this in my family. But when I and my mother went to visit our hometown in today’s Czech Republic after the fall of the wall, I still remembered many details. It was even easier for me to orientate than for her.” Quite a interesting man I suggest – and a first close contact to a “Child of War” today. I will take his shared memories with me. 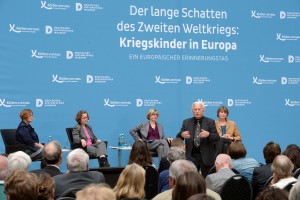 I am following the speeches of the panel-participants as many visitors of the Remembrance Day do. It is interesting to follow the ‘translation-flow’. As the mainly used language is German, just a few participants are using the simultaneous translation, but whenever an English-speaking person starts, perspective changes: Especially the elder visitors are searching for their translators immediately. The tension in the atmosphere is strong especially during discussions, not so much during literally readings – it is clear that the topic raises lots of emotions. People are focussing the panel. Nobody coughs. Afterwards it is time for the participants to keep the discussion running during lunch break.

“I am a grandchild of war!”

Many people leave the conference for lunch, others decide to visit the museum’s exhibition “1945 – Defeat. Liberation. New Beginning.”. Mixing up with the normal exhibition-visitors we are able to see interesting biographies of wartime-people – as well as many children. Especially stories from not-so-well-known backgrounds like Norway, Luxembourg and Belarus are in the visitors’ interest. At the exhibition I get to talk to another war-child. I am touched by his statement. “Arno Surminski had it easier to deal with his situation. I did never knew my father – he did!” A 50-year-old woman tells me. “I see myself as a grandchild of war, the situation of my parents’ childhood had huge influence on my growing up. This might be connected to my inability to work in the same job for more than four years. I still feel the uprooting of my parents.” During the afternoon the atmosphere is quite similar than in the morning-panel: tensed attention. 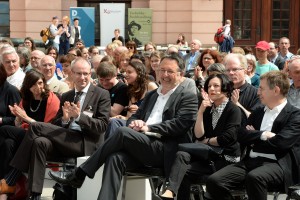 The audience and some of the panel-participants. (Photo: Körber-Stiftung / David Ausserhofer)

I use a break to grab some food at a bakery – my first meal since breakfast. After having followed another panel – now more concentrated in Europe’s today’s situation – the evening is ending in a nice reception. Between two glasses of white wine I get to ask people what they thought about the day. “New impulses”, says one. “The atrocities of war totally changed as well as ruined personalities”, comments another. “Impressing personalities – especially the authors”, thinks the next person. Also some criticism: “Sometimes a bit unfocused, but generally great.” My opinion is clear: it has been a great, enriching day. The huge hall is left empty again after we leave – luckily my mind, however, has been filled with new insights. The most important one is: We can meet those Children of War every day. But this is not going to last forever. We have to ask after their memories – otherwise we are going to loose them.

Written by Gregor
(1996) is a German Eustorian with a study background in history and political science. After his Master's he is currently working as Mercator Fellow on International Affairs in the Western Balkans. He enjoys meeting new people, having discussions and fun together. Gregor is always delighted when he finds nice postcards in his letter box – they have got a place of honour in his room.
Tags: Berlin, Children of War, DHM, Occupation, Sudetenland, Surminski, WWII
Share This Post
You May Also Like 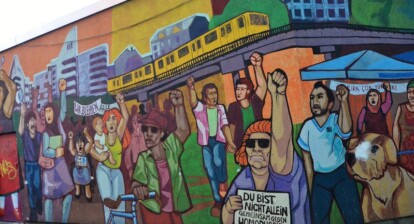 War crimes in Tuscany in 1944 – an historical exploration
10. October 2014
Previous ArticleThe personal side of history – Meeting with Lev Alexandrovic NettoNext ArticleWho am I? – Considerations after a Remembrance Day
1 Comment