…was the German Institute we worked in today.

So many people, so many countries, so many expectations, so many flights but we all had the same goal: arriving in this beautiful city called Tallinn. After a freezing night in our hostel, it was time to get to know each other better. The name-games really helped us remember the names, even if we had to ask some people more than 5 times what their name was.

Afterwards we were so good at getting to know people that we also wanted to get to know the locals. This was the perfect time for a trading game! Each group chose one little figure to start with. The task was to exchange this figure into something more valuable and luckily everyone came back with different stories and items: mission completed!

We formed a group of five people: Martin from Estonia, Estera from Poland, Silvia from Italy, Ola from Sweden and Petra from Czech Republic. We started our tour from Goethe Institute and then followed to the old city. We had to exchange a little fox:

Firstly, we met a Japanese couple that gave us a Russian coin. Then – a funny thing happened – we changed it for a hippo that used to belong to another group of Eustorians. After that we got a lot of sweets and food and money (not much, but still) ! In the end it turned out that we multiplied the number of object by three and we finally got:

– A rattler, that we took from very upset girl (but the mother promised to buy her another one!);

– A blues song from street artist that we have a video of.

We didn’t encounter much difficulties while doing the task. It was funny, everybody was friendly and the team cooperated. Quite often people didn’t have anything to trade with, but we didn’t give up and tried again and again and again

At first we had this little tiger-shaped piece of toy, which we exchanged for two common estonian apples from a nice (basicly blond… no, we are not speaking metaphoricaly) estonian family. While we desperately tried not to eat them we met two girls, and we had one apple exchanged for a pen. Now we already had something more valuable, but sadly not eatable. So we reached Town Square, where Linda found wonderful Latvian saleswoman and we got rid of the other apple and got small strawberry-shaped amulet. We met very nice Korean tourist group who were very excided about our stuff (amulet and a pen) and they started immediately searching their bags for something for us.

We got a beautiful PINK-animal-shaped-meant-for-lenzes-boxy-kind-of-thing and a moomintroll pin from Finland. We started looking for some more tourists (cause they are more friendly) and we made our way towards the Freedom Square. On the way there Gregor met one of his classmates and got the pin exchanged for a condom. When we reached the Freedom Square a very charismatic lady approached, who wished us a pleasant day and started hugging all of us so we thought that we can ask her for something to exchanged. But then a VERY strange thing happened – she took our stuff and just threw it on the ground. She suddenly seemed very upset and said that “she’s not that easy to blackmail” and then she rushed away. At first we were all frightened and confused and checked our pockets (nothing was missing luckily). BUT our wonderful lenze box, which we so treasured and got to love in the short period we had it, WAS BROKEN. Luckily Gregor fixed it. But that was a kind of a downer. So Eva came up with a wonderful idea – to exchange one of these things (condom or lenze-box) for two flowers.

But since a guy giving girl a flower and asking something back isn’t reasonable (ofcourse we had to do it) we thought that maybe we can exchange flowers for something “moraly valuable”. There were kisses, after much blushing (on Gregors part) and a very excited guy (the one Eva kissed) we made our way back.

From orange dinosaur to a very valuable coke and a card – an exchange trip that brought us through 12 different items. The trip started really good with the first exchange: Dinosaur for Japanese handkerchief. Even though we wanted to keep it, we had to give it away. But the sorrow didn’t last for so long, because only a few exchanges later all of us stood with one donut in our hands. We realized that chewing gum was a very popular item and also that Asian people are very friendly. So let’s summarize: After 90 minutes we finally ended up with our beloved coke!

With a little figure in our hands, we walked through the streets of Tallinn. Our mission: exchange the figure for something else with more value. At first, we were a little afraid but as our mission continued we got more confident. We saw a nice Japanese couple with a cute little girl. So we thought it would be nice for the girl to play with the figure. 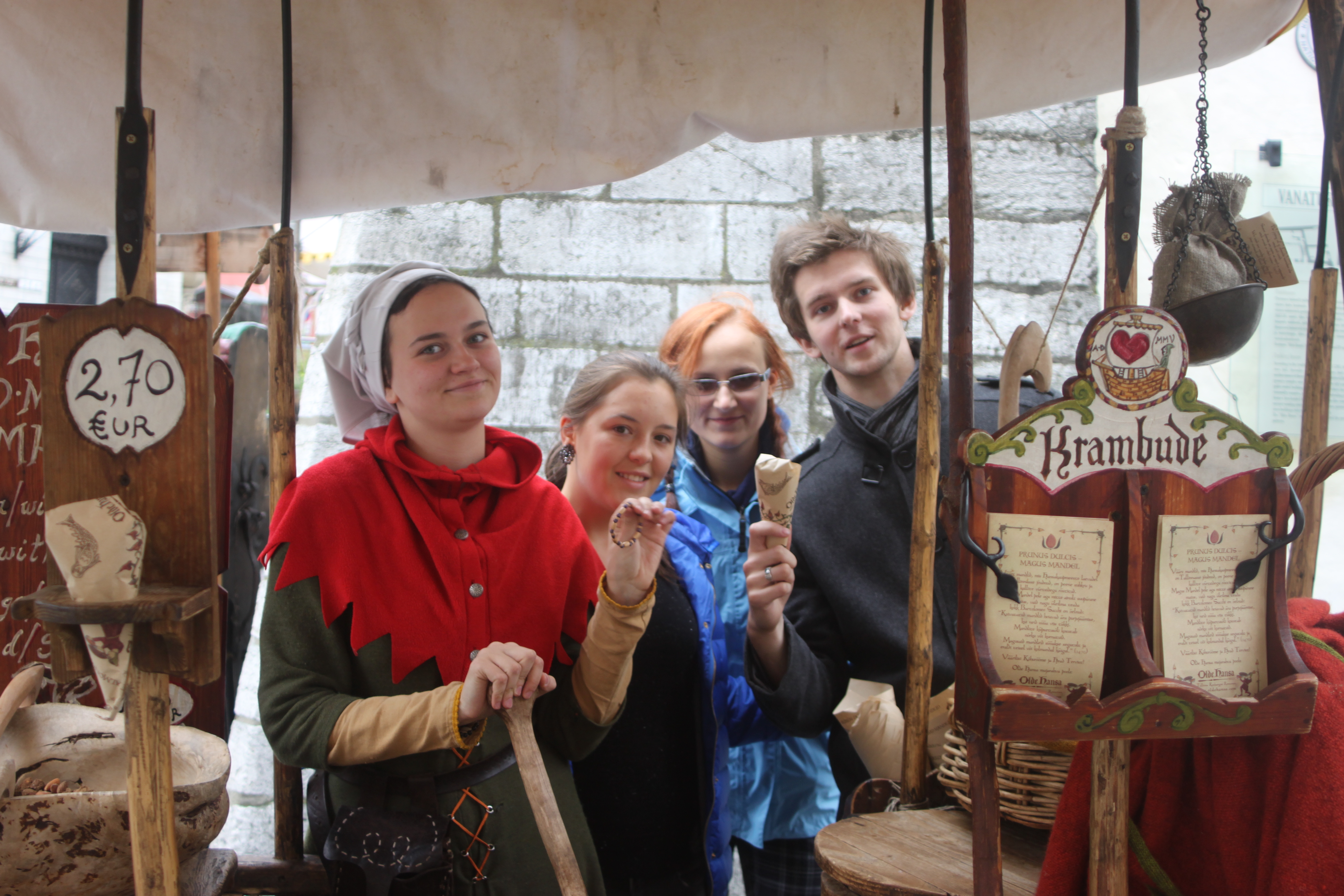 We asked the parents if they could exchange it for something. Unfortunately they didn’t find anything. But from then on, it went really good. We talked to some Estonians who gave us a lip-gloss. The lip-gloss became a pen. Our next item was a hand-made bracelet. The last person we met, wanted to give us some of the almonds she made herself. And yes, they were DELICIOUS!

Our group started out with a little hippo surprise egg toy. We had 1.5 h to exchange the toy for something more valuable. Our first exchange was probably the most succesful, as we were able to swap our toy for a clothbrush, which we gave away for a load of candies. Later on, our candies only managed to be traded for pencils, other candies and used ferry-tickets. After about thirty exchanges, we ended up with a painting of the Long Leg street, an AAA-battery, couple of candies, three pencils and good memories of hundreds of happy people from all over the world (Russia, Finland, Germany, Korea, Oxford – England,…). 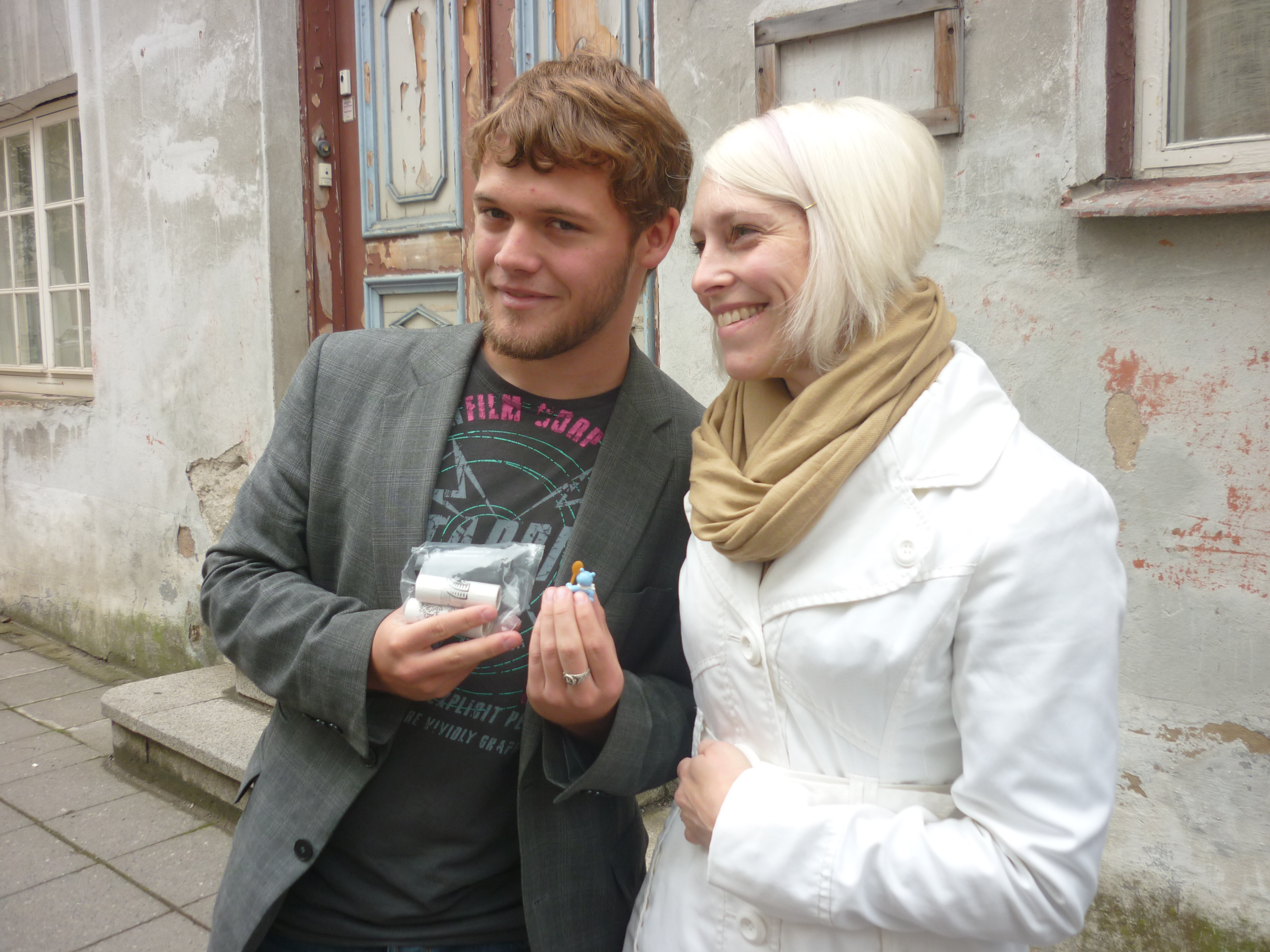 Thanks to Anton’s Russian skills (typical for people from Novosibirsk) we were able to communicate with lots of Russian tourists. Ruth provided us with the possibility of talking to Germans and Sander spoke the weird language of the local inhabitants. Mara and Ania spoke with the Spanish and gave us chocolate to survive the cool weather.

In the afternoon we started the real work. We were asked to shortly define what democracy means for us by doing some funny sketches. This resulted in both laughter and a heated discussion. By looking at our brainstorm-board we are sure that this is going to be a very interesting week!

To end our day, our new Estonian friends guided us through the Old Town of Tallinn. They showed us the typical Estonian houses, the important buildings, the sea and many other things. Walking there made us feel like we were right in the middle of the medieval times.

Today’s experiences made us curious for the days that still have to come. But first, it’s time to get some sleep.

‘Slaapwel’ and ‘God natt’ from Flore (Belgium) and Matilda (Sweden)

Written by Eustory-Blog
Here you can find reports from EUSTORY History Camps and other activities by young Europeans.
Share This Post
You May Also Like
How much should one integrate? The ABC of minorities
30. August 2011
Potatoes rule Europe!
16. October 2010
Running out of time
17. October 2010
Not spoiling the broth*: Day 4 in Berlin
17. September 2012
Previous ArticleWelcome to Estonia!Next ArticleStrictly unpolitical politics
1 Comment