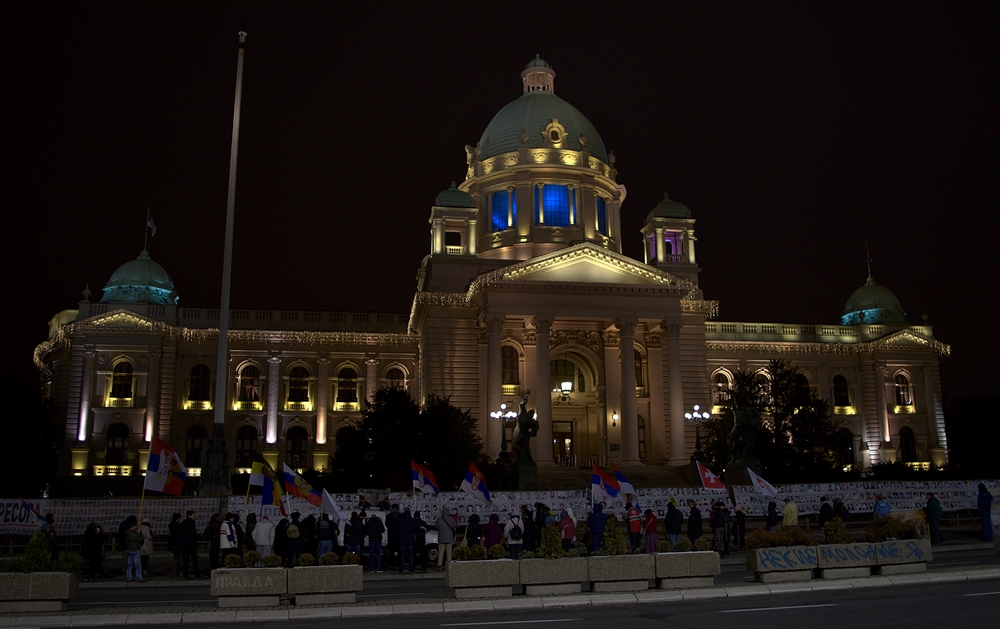 "The last one to leave turns off the lights" (Photo: Aleksandar Antic)

“EU report on Serbia likely after European election” – these headlines turned the spotlight once again to the debate of Serbia’s access to the EU. Divided between Europe where it belongs to geographically and culturally, and Russia – the “older brother and protector”, Serbia looks like Buridan’s ass that would starve to death between two equally alluring stacks of hay. Struggling to maintain the balance between East and West, trying to solve the Kosovo question and dealing with its own internal turmoil, Serbia is on a rocky road. In the light of the upcoming European elections in May, Milena from Belgrade analyses its importance for the Serbian society.

The process of Serbia becoming an official candidate state to join the EU has been very troubled. It’s been almost 15 years since the enlargement project and comprehensive negotiations started. At the moment, Serbia’s goal of becoming a member in 2025 seems quite unrealistic. Moreover, the upcoming reforms in the EU itself are likely to prolong this process.

Serbian citizens will not vote in the European parliament election this May. But its outcome should certainly be of interest to them. Not only will the elections show which policy is going to prevail in the EU, but who will lead the diplomatic negotiations – a question of great significance for countries that strive for accessing the European Union.

Do they even want us? Enlargement conundrum 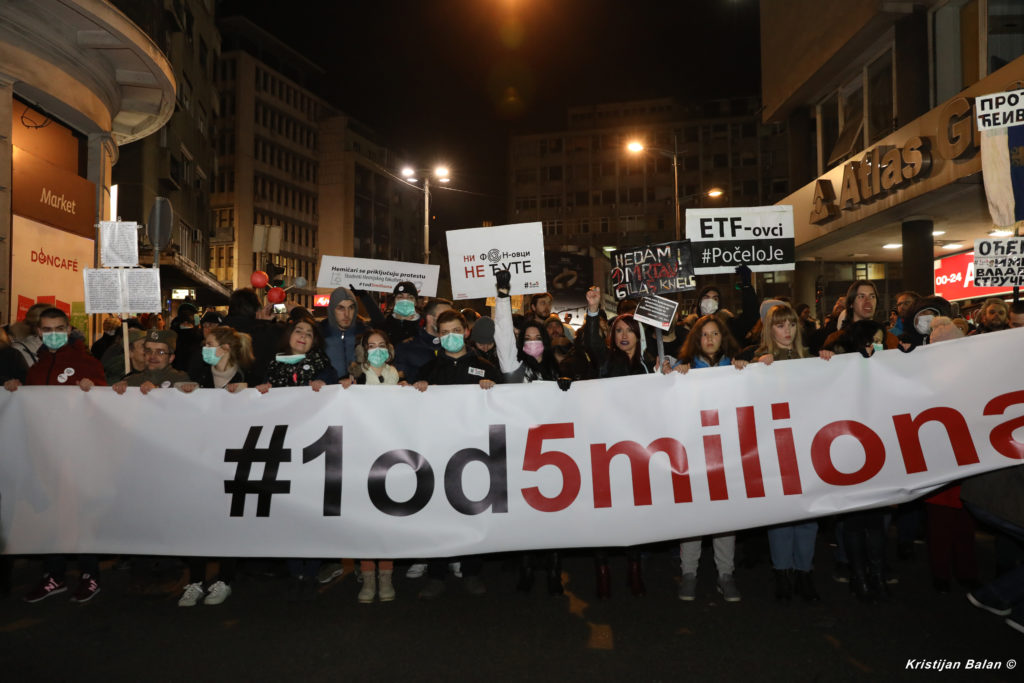 Protests in Belgrade “1 of the 5 million” (Photo: Kristijan Balan)

2018 was generally described as a year of great upturn in the enlargement process. But the anticipated progress of the candidate countries ceased, as well as the EU’s strategy for the Western Balkans. French president Macron blamed the EU for dealing more with enlargement issues than with internal reforms. The recent delay of the progress report for non-EU countries seems to approve the fact that enlargement-issues are none of the Union’s favourites. Besides Brexit, protests, the rise of right-wing parties and nationalism in the EU, enlargement is one of the issues inciting a populist mood – and therefore best to be ignored. At least until after the elections.

It is no wonder that there is not much enthusiasm among some member states for unstable Balkan countries. A very difficult, somewhat schizophrenic relationship with Moscow and Putin’s popularity amongst Serbs certainly does not help. The Balkan tendency to vote for nationalistic leaders and governments of “stabilitocracies” rather than democracies, should not be ignored neither. Besides, EU officials are contradictory when it comes to Serbia’s eventual access to the European Union. Careful in evaluation and statements, they leave room for hope, but with a wide time-frame and many “ifs”.

Between promises and talks – do EU elections matter to Serbs?

How much do Serbian citizens even care about EU elections? One could argue: not much. Sporadic headlines about possible outcomes and results cause mild reactions among citizens, especially young people. And if there is a reaction, it is inseparable from accessing the EU. Why is that the case? I tried to find the answer by discussing this topic with some of my friends and acquaintances.

If I summarized the discussion about the EU in two sentences, that would be “We are tired” and “We are unimportant”. Serbians in their twenties and thirties grow up listening to a lot of political talks and experience national elections  every two to three years. Constantly repeated expressions like “your life will be better in two to three years” or “we will join the EU in four to five years” is starting to sound like a fable at least (like the one about the boy who cried wolf). Once these prognoses actually become realistic, no one will believe it. Or “there will be no more people left to believe it” – as one of my friends stated. 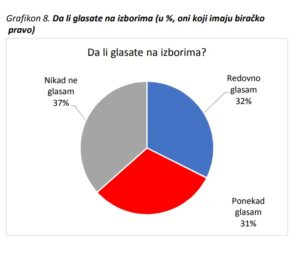 Recent polls show growing pessimism and indifference among young people in Serbia when it comes to the European project. They are divided over the question of whether the country should enter the EU, but they also see their future in one of the European countries. Three quarters of those between 14 and 29 express a desire to emigrate, which puts Serbia at the forefront among countries in the region. Unemployment, a poor standard of living  and seeing no perspective are the reasons why many Serbians do not want to wait for another accession-chapter to open.  These belong to the ones who eventually “got tired” (or will be soon) – and with whom I communicate today only on WhatsApp and Facebook, because they live in Vienna, Zurich… or across the ocean.

The ones staying are wearing off yet another pair of shoes these days. They are protesting on the streets of Belgrade each Saturday, against corruption, nepotism and vast economic divisions. One of the main demands of protesters are free democratic elections and press freedom that gives opposition leaders a voice in the media. There are lot of students and young people on the streets every Saturday. But there is a paradox between their demands and reality – young people are one of the biggest abstainers on all previous elections. 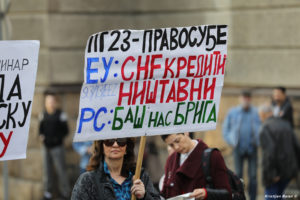 It is also European officials who are addressed at these protests – with criticism that the EU is turning the blind eye on partocracy, violations of media freedom and antidemocratic behavior. All for the sake of stability in the region. The protesters still believe in change for the better, but are deeply worried if change is possible. From their perspective, for the EU they are “unimportant“.

Both struggling groups – the “tired and un-important” – should pay more attention to EU elections. The outcome could mean a change for better or for worse, especially for the younger population. If this month the populists gain more influence in the EU parliament, the ones still keen to leave Serbia could face a tightening of the country’s migration policy. The ones willing to stay and change society for the better should care direction of foreign policy of enlargement, and relations to our most pressing problems. If the European Union tolerates member states violating EU principles  – what is it that non-EU members could hope for?

Written by Milena
Milena (1987) is a Eustorian from Serbia studying sociology. But her main interests are family history, ethnology, social interaction, and places where people gather like traditional pubs with historical background. She plans to travel a bit more and perfect the skill of traditional pastry making. She hopes to work for UNICEF one day.
Tags: Election, European Parliament, Immigration, Politics, Protest, Serbia
Share This Post
You May Also Like 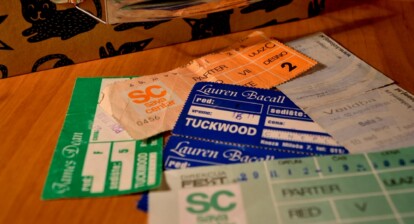 #callVienna: Election Time in Austria – Why I Voted for Hofer or why Van der Bellen is the Lesser Evil
20. May 2016
Previous ArticleA Spanish Surprise? How the Right-Wing Vox Catches the YouthNext ArticleVoting4Europe: Will the Superhero of Democracy Return?