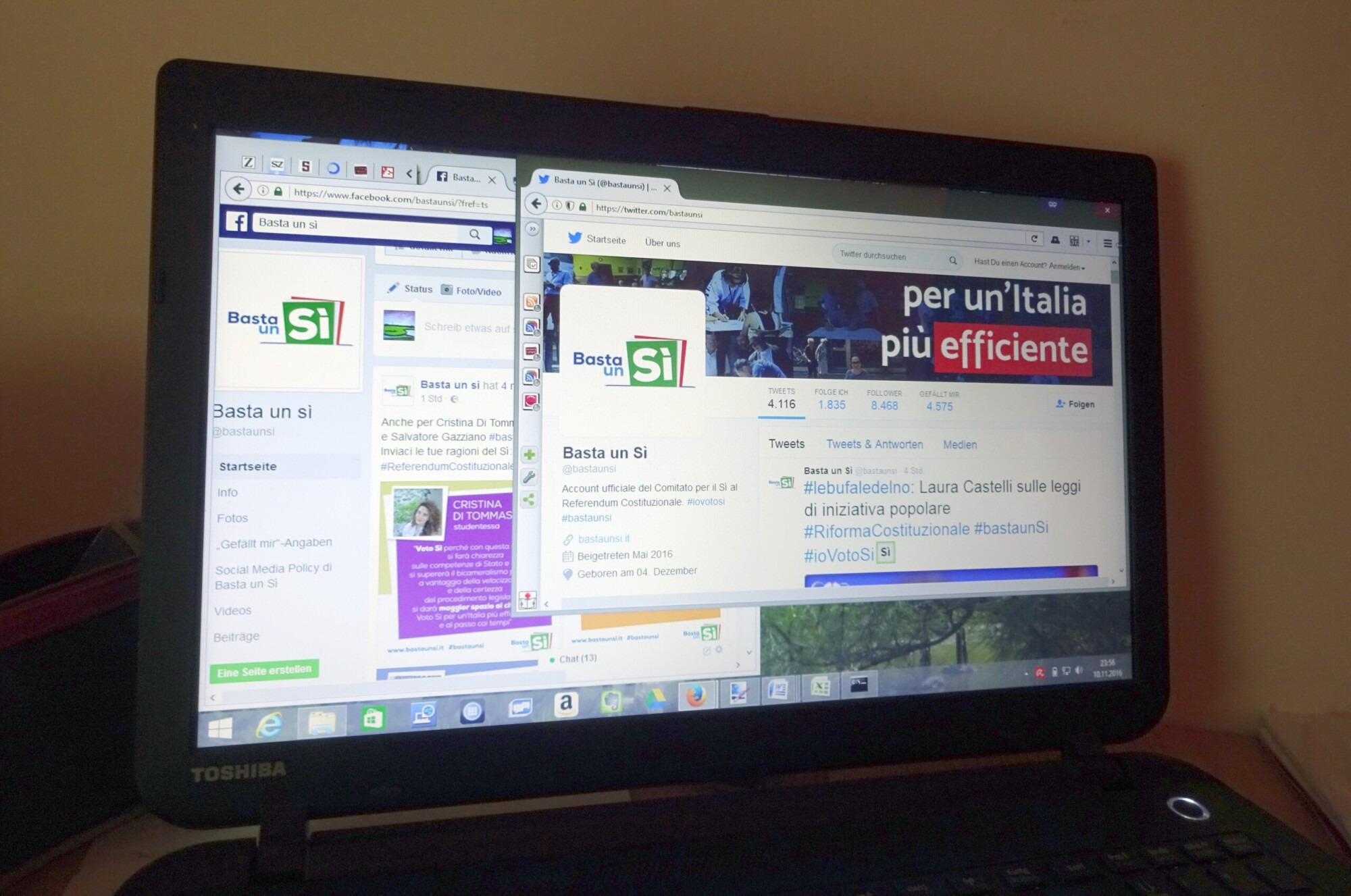 Voters in Italy will have to decide about a constitutional reform on December 4th. The referendum, strongly supported by Italian PM Renzi, results in heated debates, also in our #callItaly, where our young voters share their fears that it will shift powers away from the parliament or will weaken Italy’s position in the EU.

“Cara Italia, hai voglia di cambiare davvero? BastaUnSì.” (‘Dear Italy, do you want to change really? A Yes is enough.’). This is one of the campaign-slogans of the government-led initiative for a radical constitutional reform in Italy. Most observers agree that Italy will change after a successful constitutional referendum, but whether this change would be positive or not for the country is discussed emotionally in Italian society.

Within continuing economic problems and a strongly challenged administration not just because of the still relevant refugee and migration issue, but also due to a structure often not reacting appropriately on needs of citizens and economy, the actual center-left Italian Prime Minister Matteo Renzi promises to resolve many problems of Italian government with a successful referendum. The new constitution would change especially the influence and composition of second parliamentary chamber, the Senate (in Italian Senato), regionalizing it and reducing its competences in favour of the fist parliamentary chamber the so-called Camera degli Deputati (House of Representatives).

Moreover it will give many competences (e.g. the competence for tourism) from the regions back to national level and abolish the administrative structure of the provinces, in favour of the municipalities and regions. 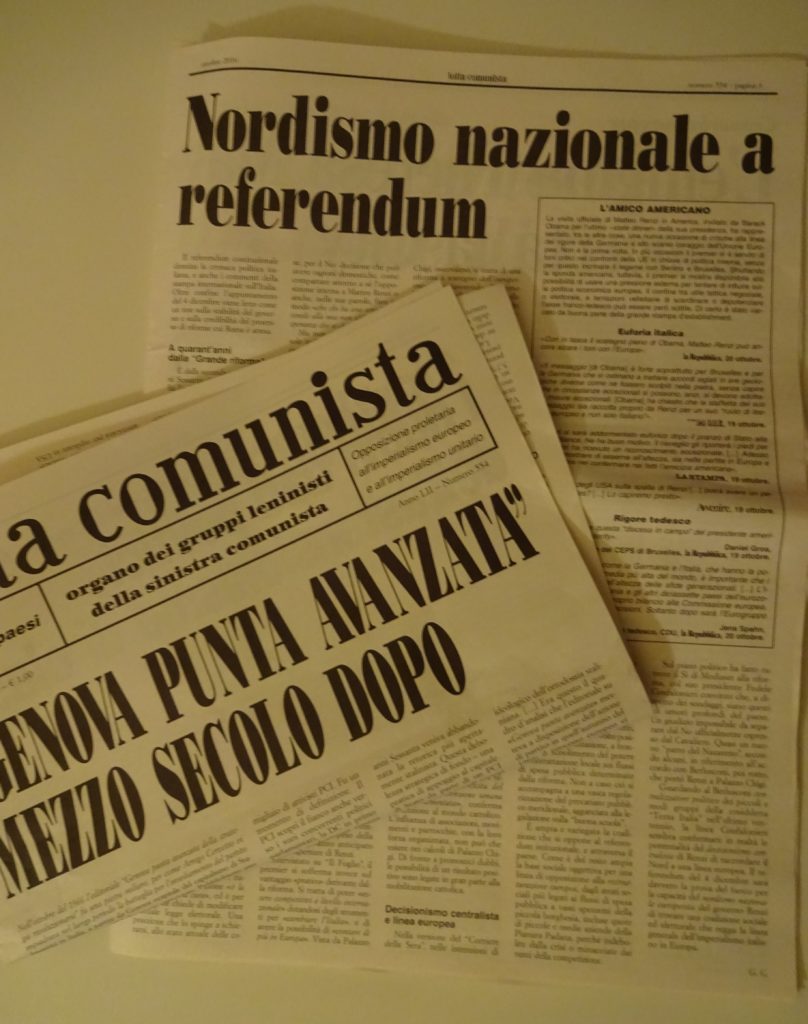 Not only the extreme left and right are fighting for a ‘No’. Here a report in Italians ‘Lotta Communista’. (Foto: Gregor Christiansmeyer)

While parts of the Italian society fear an unhealthy concentration of power in the national government, others hope to simplify political decision-making. If the referendum will get voters support or not, international media agree, it will have serious implications especially on European level.

To get some personal insights we interviewed two young Italians – 21-year-old Leonardo Galanti from Rome, currently studying in Milan and Livio Warbinek, a 27-year-old PhD student from Trieste now living in Florence – to give us an insight into their perspectives. Here are their answers.

Many observers agree, that Italy would change after a successful referendum – in which way?

Leonardo: There will be for sure a huge reform inside Italian institutions. Despite the majority of the talk turns around the transformation of the Senate in a chamber of local autonomies, I think that the most important element of the reform is the redefinition of the relationship between central government and regional governments. A lot of important powers of the regions will be sent back to Rome and all provinces will be abolished. It’s a great reform of centralization that will make the Italian governments stronger in the future.

Livio: Actually, I don’t know. If you mean “successful” as a victory of “yes” and a new constitutional settlement, I am not able to answer in which way Italy will change. As an Italian, I know that often everything is modified and nothing changes. But that is a populist point of view. For sure, it will be a new political arrangement; new coalitions and the Camera dei Deputati will become more powerful compared to the Senato. But I am not sure that it is a good result. Maybe Italian political activity will be faster, without the power of Senato, but it is a danger for democracy, too.

What is the issue that occupies you the most according to the referendum? 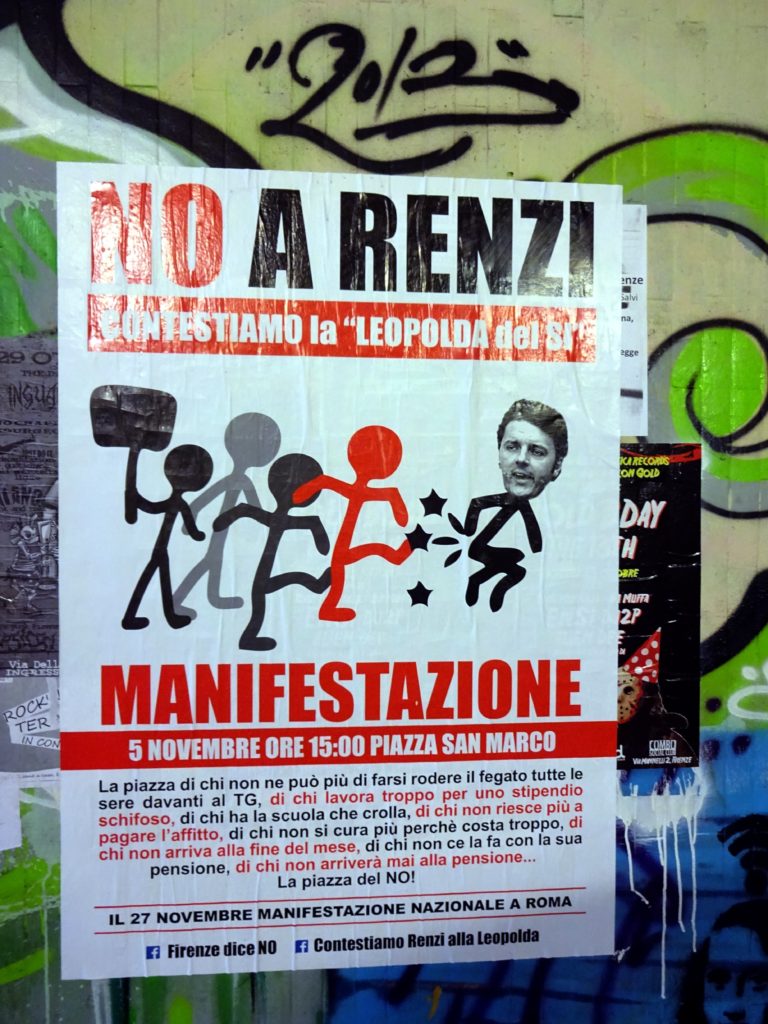 Leonardo: I am disappointed by this reform, particularly about the Senate question. I would have really preferred its abolition instead of a survived senate empty of all its powers. I’m worried by the shift of powers that this reform will create. The government will rule over the parliament (the Prime Minster – during election – will literally “nominate” the deputies) while our constitution clearly wants the opposite: the citizens elect the parliament that expresses a government being dependent from the House.

Livio: The issue that occupies me mostly is the new idea of political participation and representation in the (new) Senato. I agree with a federal organization of the Upper Wing of Parliament, but this law would build a crowd (maybe “gang”) of mayors, presidents of regions and local representatives without a real interest for their main occupation, and so without logic and a true federal organisation.

The Italian Prime Minister Renzi stated he would (probably) resign, if the referendum fails. Would you support this move?

Leonardo: It’s a stupid move that shifts the attention from the debate on the content of the reform to a judgement on the work of the government. As we’ve seen, he already understood his mistake and I don’t think he will leave in case of defeat.

Livio: I am sure that if the referendum fails, he won’t resign. And your ‘probably’ in the question tells me a lot. Nobody believes in his resignation. Of course, I would support this move, but it won’t happen. If the referendum fails, we will probably have a new settlement of the Italian parties, new elections and a new government, probably less progressive or even worse…

What effect would a “No” in the referendum have on Italy’s role in the European Union?

Leonardo: Nothing will change, as with a No-victory nothing will change in the constitution, too. We will still have a weak position that isn’t caused by the institutional rules but by our big debt and slow economic growth.

Livio: It depends on what Prime Minister Renzi will do. If he resigns, Europe will have a new government (or Prime Minister) wherewith to speak, talk and agree. Everything could change and Italy’s role in the European Union will be less powerful. If Renzi doesn’t resign, it will be worse: Italy would count less in the European game – but with the same politicians.

Besides the referendum the political debate in Italy is as well dominated by anti-European statements. Is it just the politicians moving away from the idea of Europe or the majority of the Italians as well? Why?

Leonardo: Italy today is a country that is changing a lot, politically, economically, socially and ethnically. This process started many years ago – the first V-Day / F***k off Day of M5S (the Movimento 5 Stelle) was in September 2007 – in a Europe well far away from the populist dangers of nowadays. I cannot say that the wave had started its march FROM Italy, but for sure IN Italy. Today M5S is the biggest Italian party, and will probably win next political election. Now, despite their sometimes inappropriate, extreme acting, they are really different from those right-parties who are rising everywhere in northern Europe and that in Italy are practically absent. Are they against the common currency? Yes, and that is an economic issue. Are they hostile to the actual ruling system of Europe? Yes, not because they’re against the European idea (as many neo-nazi similar-populist parties in Europe are) but because they would like to draw a new Europe, in some way more powerful and united than this one. As the M5S, we Italians are not against a European Union. We are against this union.

Livio: I don’t want to believe that Italians hate Europe or that they want a sort of ItalExit. I think that it is very useful and easy for Italian politicians to blame the European Union for all of (our) problems and political mistakes. Easy, but not true. But it is a problem of all European countries with anti-European statements: in Italy anti-Europeans focus on immigration, EU taxation and EU economic control. In the same way, all anti-European parties in Europe focus on the problems of their countries. It is a common problem for EU, not only an idea of Italians.

Link: Official Text of the Italian Constitution in English

Written by Gregor
(1996) is a German Eustorian who has been doing his Bachelors in history and political science in Münster; after a year of internships he currently is a graduate student in Göttingen. He enjoys meeting new people, having discussions and fun together. Gregor is always delighted when he finds nice postcards in his letter box – they have got a place of honour in his room.
Tags: Election, Italy, Nationalism, Populism, Referendum
Share This Post
You May Also Like 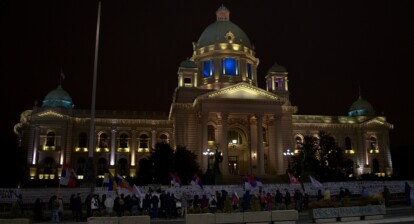 #CallNetherlands: Elections in the Netherlands – end of EU as we know it?
8. March 2017
Previous ArticleWhere Were You When… The Troops of the Warsaw Pact Invaded Czechoslovakia in 1968?Next ArticleUnited in Diversity? Identities in Europe
1 Comment