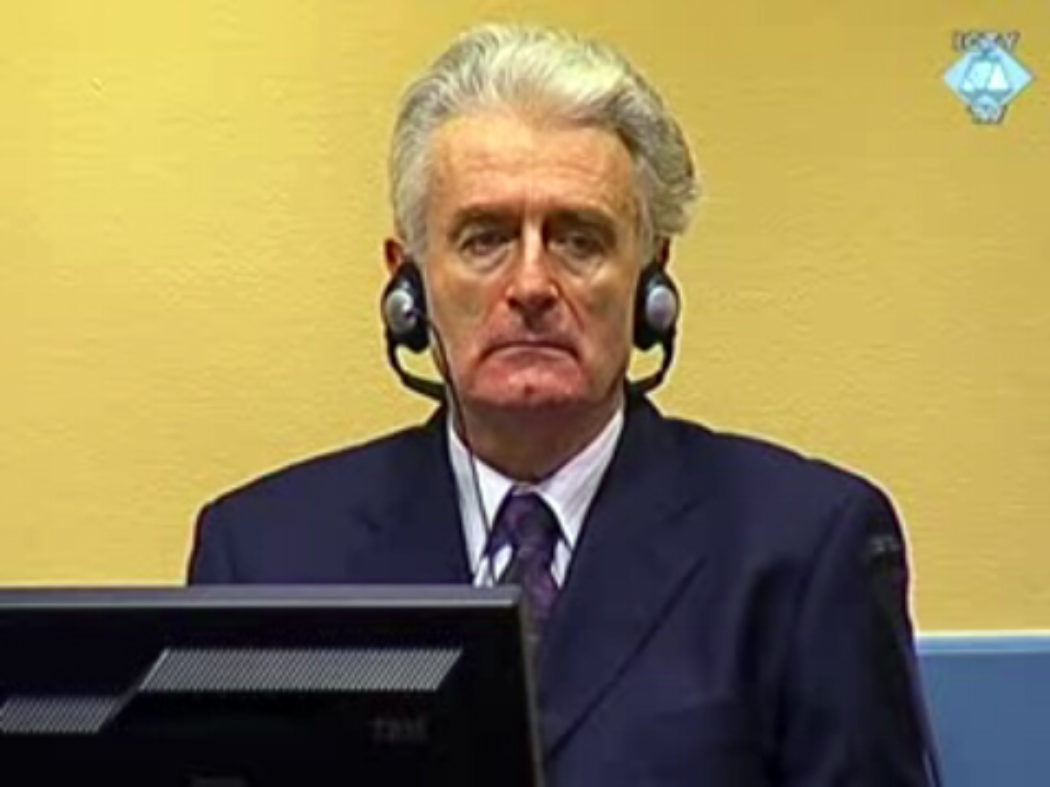 First hearing of Radovan Karadžić at ICYT 2008 (c) Wikipedia The outgoing Serbian Minister of Justice said that “we will always have this bitter taste because some others who contributed maybe even more… were simply not prosecuted.” He concluded that we cannot expect anything from the Tribunal that liberated 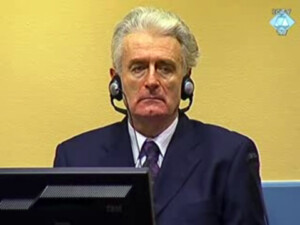 On the 24th of March 2016 the International Criminal Tribunal for the former Yugoslavia (ICTY) convicted the Bosnian Serb’s wartime-leader Radovan Karadžić on 10 out of 11 accusations of war crimes during the Bosnian war and sentenced him to 40 years of imprisonment. He was found responsible, among other things, for genocide conducted in Srebrenica in 1995, in spite of the presence of the UN troops.

Given that the extermination of around 8000 people has not occurred in Europe since the WWII, the verdict received great attention in the European community. How was it perceived by the Bosnian and Serbian press?

The outgoing Serbian Minister of Justice said that “we will always have this bitter taste because some others who contributed maybe even more… were simply not prosecuted.” He concluded that we cannot expect anything from the Tribunal that liberated Gotovina, Markač or Haradinaj, Croatian and Albanian military leaders in the Yugoslav wars.

The perception of the verdict by Bosnian media depends very much on the particular newspaper. Bosnia and Herzegovina is a multiethnic country, the war has basically divided it into two parts: the Federation, inhabited mostly by Bosniaks and Croats, and the Republika Srpska, predominantly peopled by Serbs. Many newspapers therefore target a specific ethnic group.

The sentence of 40 years of imprisonment has disappointed many Bosniaks, as they had expected a life sentence, at least for symbolic reasons. The biggest newspaper in the Federation “Dnevni avaz” titled an article with a quote by former prosecutor at the ICTY Carla del Ponte: “Karadžić should have received a life sentence”. This newspaper also published a video, asking citizens on the street for their opinions. One pedestrian stated: “40 years – that is three hours per victim. It is sad that the life of a human being is just worth three hours.”

The Croatian newspaper in the Federation “Dnevni list” titled: “Bosniaks expected life sentence”. Although Karadžić has also been convicted for crimes against the Croatian population, the headline gives the impression that there was no expectation whatsoever by the Croatian population considering the verdict, which is confirmed in the article itself. 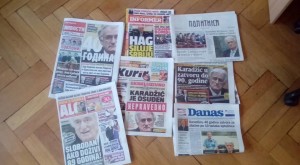 “Vengeance of the West”

The Serbian newspaper in BiH, “Nezavisne novine” used the title: “Vengeance of the West against Serbs.” That was the dominant attitude of the press in Serbia, too. On the one hand, the verdict was delivered on the 17th anniversary of the NATO bombings in Serbia in 1999. This synchronicity helped to spur unease and nationally oriented discourses. On the other hand, the Serbian parlamentary elections will be held in April, and a pinch of nationalism has so far proven to be a magic formula for good results.

The day after the verdict, the two most read daily tabloid papers had their usual bombastic titles. “Informer” wrote all over the front page “THE HAGUE RAPES SERBIA”. The subtitle disputed the verdict, saying that there was no concrete evidence. “Kurir” quoted an ex-associate of the Hague Tribunal on its front page, saying “KARADŽIĆ UNJUSTLY CONVICTED”. Only two papers, Politika and Danas, gave a relatively balanced report that respected the complexity of the issue.

On the commemoration of the NATO bombing victims in Central Serbia, Prime Minister Aleksandar Vučić said that Serbia will not allow this verdict to be used against Republika Srpska.

The verdict against Karadžić implies that the political leadership of the Serb entity was involved in systematic murder, expulsion and genocide, wherefore the legitimacy of this entity is for some now under question. Many politicians, especially on the Bosnian side, have been arguing for years that the Republika Srpska must be abolished, as it is a “genocidal construction”. The debate has now received new impulses.

The Bosnian side did not stay silent. The Bosniak newspaper “Dnevni avaz” is quoting a prominent nationalist Bosniak figure, Sejfudin Tokić: “Bosniaks have to define the goal to abolish Karadžić’s genocidal Republika Srpska.”

Before the verdict, Milorad Dodik, president of Republika Srpska, said that the verdict will be „vengance on Serb people, because the leader who fought for freedom… is on trial.“ He warned the public that after the verdict Republika Srpska will be under attack. Dodik has also inaugurated a student dorm named after Karadžić in Eastern Sarajevo recently.

Finally, most of the commentators agreed on one thing, openly or tacitly, as the famous historian and politician Latinka Perović concluded that “nobody will be pleased with the verdict”. It will not bring us toward reconciliation, as we have not agreed on a balanced account of the events and it is unlikely that we will any time soon, she added.

Haris Huremagić
born 1994 in Austria with Bosnian roots, law student, likes debating about music, philosophy, politics but becomes most passionate about historical topics. Haris adores hot chocolate, you are free to invite him in Vienna.

Milan Vukašinović
was born in the South of Serbia in 1989, but his life is stretched between Belgrade and Paris. Stories, languages and travels are his passions. He is a byzantinist, an aspiring writer and wannabe cook and if he could, he would live in a movie theatre. "Working as an editor on HC was like feeling the pulse of Europe and rafting down its bloodstream."