It was probably the sun and the tasty breakfast that gave this morning a special kick. Going into the garden for our third warm-up ‘social gathering’ we noticed there was some new feeling of connection between us and even the most tricky toaster-games worked better.
Dr. Jan Behrends brought us back into the 20th century to witness the transformation of Berlin affected by different ideologies. The topic  ignited a vigorous debate on the powerful people of the era and how their ideologies turned Berlin into two separate cities. Besides, we realized that there are many layers of history in the city that we see today. Mr. Behrends discussed how an idea can get its physical shape in the form of architecture, where the buildings carry the message of the time. The discussion came to an end there and went to enjoy our blueberry pancakes before catching the coach to the Berlin-Hohenschoenhausen  Prison.
After arriving there, everybody’s mood changed instantly.

There was a very depressing atmosphere there and once we met our guide, everybody realized something was very different from what most of us had ever experienced before. Our guide used to be an inmate, being punished for an escape attempt. His past – everybody could feel – still had a very strong impact on his personality. After showing us the so-called “submarine-cells” in the dark cellar, he lead us to the rubber cells, designed to calm down those who went crazy in the social seclusion that they were kept in, and to the hospital. We realized that this prison was designed to humiliate and degrade the inmates and deprive opponents of the GDR-regime and those who tried to escape of their personality. The inmates left part of their soul in those walls just like our guide seemed to be only a shadow of the man he used to be before his imprisonment. The emptiness of this place was depressing to many of us.
We left with a sense of hope that ideologies of the future won’t lead us back to a time where we would be trapped in such a place.

*Publisher’s  remark: This blog was a team work in the best sense of the meaning. There was loads of chocolate,  a Russian computer and an Italian messenger involved and they proved the saying wrong, that too many cooks spoil the broth! On demand they even send a group picture. I don’t know who of them did what for the blog, but I’m sure that they all have their share!

Written by Eustory-Blog
Here you can find reports from EUSTORY History Camps and other activities by young Europeans.
Tags: GDR, Hohenschönhausen, Prison, Stasi
Share This Post
You May Also Like 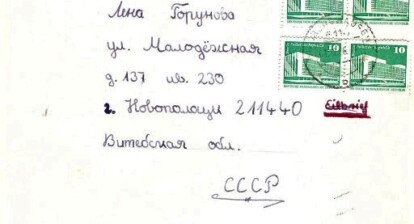 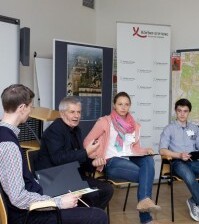 East Germany’s secret police files – who owns the past?
3. July 2014
Previous ArticleWe are Welshmen in Berlin…: Delayed Day 2Next Article“I’ve been looking for…”: On the traces of the ruling powers in Germany