The following story is not explicitly an exile story but we learned, that this term is not that easy to define. The person Marica has decided to interview has a long and particular story as a migrant. His name is Klodian, he’s a student at the University and a musician. Now he’s 27 years old but when he came for the first time in Italy he was only 6. Our interview begun with the description of his personal background in Albania before the departure…”I was born in Tirana , my family was composed of 6 members. Myfather was a factory worker for engineer industry, my mother worked in a textile industry  and my two sisters and one brother attended the school of the city. I was really young when I was in Tirana but I still clearly remember my life before the departure. It’s seems to me as I was born twice especially because I’ve experienced two different realities and lifestyles. When I was in Albania ,even thought I was a child, I was very smart and self-sufficient.  At that time Tirana was under the Communist Regime and I remember the soldiers all over the city and the many old remains of the war in the streets. Me and my friends used to play especially with abandoned gas masks and we also wandered around the city without control of our families …being free and independent was normal for me.  The general atmosphere was severe and repressive , at that time it wasn’t possible to profess any religion and the presence of the soldiers in the city makes the daily life repressed and under control”.

I asked Klodian to tell me about his life before leaving , his memories and he said “well, as I said life in Albania was really different especially for a little child like me who experienced also the Italian lifestyle. I went to children school , I lived with my family and my friends and I was really independent . I was very young but, before coming in Italy,  I didn’t receive all the same attentions and the same control for example as an Italian child ”

“What was the reason why your family decided to leave Albania?…

He answered ” Well the main reason of my departure was linked to an important political event for my country : in fact in 1990 there was the crisis of the Communist Regime and after that it started a period of crisis  and general disorder. Then one day of March 1991 my mother took me , my brother and my sister to the harbor in Durres where there was a big ship ready to leave to Italy. I remember the confusion and the thousands  and thousands of people who run all over in order to get on the ship…confusion, desperation and hopes were the main feelings . After the crisis of the Communism the Italian and the Albanian Governments made a mutual agreement : in fact they established  that Italy would have accepted the arrival of a certain number of ships and all the migrants  would have been recognized as political refugees. But the other ships that came later were sent back to Albania.”

I was impressed, ”I can imagine that the number of migrants was uncontrolled“  and Klodian said “yes, I can’t describe the confusion! I had never seen so much people hold together even in every single little space of the ship. The ship was really overcrowded , we were forced to travel without food and water, you can imagine the lack of hygiene. That situation was unbelievable for me! We travelled for 15 hours , I was stuck under a seat all time. I was afraid especially when I started to be hungry and thirsty . As soon as we arrived in Brindisi, a city in the South of Italy, the arrival of thousands of migrants involved the whole population. We received a big help and so much hospitality both to many humanitarian associations and also to the inhabitants of the city.”

I asked…”What was your first impact with the new reality? How did you feel” ;

Klodian answered: ”As soon as I arrived in Italy I was both confused and at the same time curious. Even if first I wasn’t completely conscious of what was happening to me and my family, I knew inside myself  that something important was changing…because my surroundings were changed. We first received hospitality by a family in Brindisi and after that, thanks to an humanitarian Christian association named ‘Caritas’,  we moved to Laterza, another little city ,where we were definitely greeted by a family of two persons… that became my family . These two people decided tohelp my family and to adopt me since I was only six years old. From that moment on I started my new life. I’ve learnt Italian language but I’ve completely forgotten my native language also because I’ve definitely left Albania. ”

I felt really involved in his vividly sketched story… “That was a deep example of humanity and solidarity for you and your family! What do you remember about the first time of your ‘new life’? Do you thing that the choice  of leaving Albania has really contributed to improve your life ? Do you miss something of your country?”  …

”Well  I remember that the first period in Italy and especially  with an Italian family was hard! I had to adapt to a new life style, new habits, a different language ,society, culture with more control and rules that I hadn’t had in Albania before. My free and independent spirit had to turn into a controlled and obedient one …this is one of the many reason why I feel like I was born twice. Butat the same time I feel lucky, lucky of have lived two different, and for many aspects, opposite realities…and of course I’m lucky also for the solidarity of people that we received . Our life has improved a lot in Italy, I‘ve had the possibility  to study, to work,  to be educated under rules and good control. I often think about  my country, my previous life and how it has changed here in Italy. I often think about my  family , my dad and one of my sisters who are still living in Albania.  My personal experience gave me a particular awareness about the problem of migration and also about the problems of our society with its differences and also its gaps. I’ve experienced the difficulties and the strength of going on , the good destiny and the renounces …and also the power of humanity that‘s the one main element that could contribute to overcome the most of the problems of our society. We all are human, everyone has the same rights. Now I feel Italian but I’ll never forget my origins and that bridge on which I walked from one life to another one…”

Written by EUSTORY Blog
Here you can find reports from EUSTORY History Camps and other activities by young Europeans.
Share This Post
You May Also Like 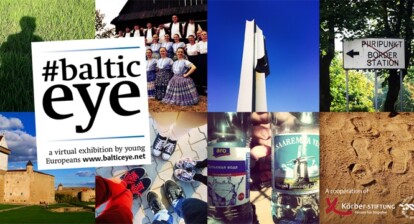