Having a successful exile is never easy. Katherine interviewed a Kurdish couple that had to leave Syria after being dispossessed of their nationality; they couldn’t be Syrian but neither Kurdish. They live now in Germany where they have managed to build a new life.

I had the chance to conduct an interview with a Kurdish couple from Syria who came to Germany as asylum-seekers over a decade ago. During the interview they told me about their situation before their exile, the circumstances and experiences during their coming to Germany and how they were received in the new country.

Before they came to Germany, they had been living in Syria, the place where they lived being hometown to many members of the Kurdish minority, the biggest ethnic minority in Syria.  So to understand the situation of my interviewees as best as possible, one needs a bit of background information about the situation of the Kurdish people and their situation in Syria in particular.

The Kurds – now being by number the biggest ethnic minority of Syria – are the inhabitants of a region called Kurdistan which is no state of its own today but a geographical term for a region extending over the area of various neighboring states, that is of Turkey, Iraq, Iran and of course Syria. But although part of the region officially belongs to the area of Syria, the vast majority of its Kurdish inhabitants do not possess the Syrian citizenship since the government itself had them denationalized in the 20th century, thus leaving estimated ten percent of Syrian population stateless in a country where they had been born, where their families and where they themselves had been living all the time. This denationalization made the situation of the Kurds increasingly difficult: People found themselves forced to quit their studies and their jobs due to government-decided regulations and they had to experience that being stateless in Syria equaled being without rights. My interviewees told me that the denationalized and the population of Syria in general had to witness vehement violations of human rights and vast corruption of authorities and that they always were living in fright of going to jail due to the arbitrariness of these authorities. For the Kurds, the situation was especially hard: They had to face dispossession by the government and had to see how their land and houses were given to the Arab population instead. Furthermore, the Kurdish language was prohibited, back then Syria considering itself an Arab state and due to this self-conception the state tried to repress the Kurdish identity. One of my interviewees remembered being slapped by a teacher for speaking Kurdish to friends who would not understand the Arabic language. As for my interviewees, being members of the religion of the Yezidi, they were a minority in Syria regarding more than one aspect. So additionally to the repressions they had to endure for being Kurdish, they were facing a policy of religious intolerance in their country and by many members of the prevailingly Islamic population of Syria.

All of this finally made them decide to leave their country, also in hope for a better future for their children whom they did not want to be facing the same hostile situation they had witnessed in Syria. However, leaving was difficult being stateless, without any valid passport or equivalent documents. So although the Syrian state had the Kurdish denationalized, they allowed them the option of purchasing passport documents for emigration- for extortionate prices: In order to buy two passports my interviewees had to sell their house and nearly all of their possessions to be able to afford the documents which brought them finally to Germany.

So things didn´t come easy in the new country. They first had to obtain a residence permit which then had to be prolonged every six months, but which was only given on basis of having found work, whereas a work permit was only distributed under the condition of having acquired a residence permit, which lead to considerable difficulties. Apart from that, they told me, they couldn´t do their actual job, instead having to work long hours of low-paid jobs. And for long, things didn´t become any easier, once they were even facing their deportation from Germany back to Syria. This deportation meant their biggest fear since the situation in their left home had not changed for the better so they knew what would await them there. Fortunately, in the end they were allowed to stay – and felt understandably relieved.

Finally they had obtained the permanent residence permit and thus could live in Germany without the threat of being forced back to Syria. Since then many things have changed: Several years ago they went into business for themselves. Meanwhile he has also acquired German citizenship, for which his wife also applied, whereas their children who were all born in Germany remain stateless until the age of sixteen when by German laws they will be able to acquire a nationality.

Looking back at their experiences in Germany so far, they both say they have been well received by the population, but however that authorities and laws imposed various organizational problems on newcomers, e.g. obtaining permits etc.  Nonetheless they have managed to build up a life in Germany, which their children have come to call home, with it being their native country. The couple told me that their children could understand the Kurdish language, but their native tong to grow up with was German and that the family also speak German in everyday life. They both also highly appreciate that their children are familiar with the language, the Kurdish language, they say, has its importance and significance back in their hometown in Syria with its Kurdish population amongst which it can serve as means of communication, they say that it belongs to their hometown there, to which they have not been since they left for Germany.

Written by Eustory-Blog
Here you can find reports from EUSTORY History Camps and other activities by young Europeans.
Share This Post
You May Also Like
Exile from the premises
30. July 2011
Exile stories XIV: “Just being with your people…”
12. August 2011
Exile stories I: “When I got used to dumplings, I would be a real Czech”.
18. July 2011 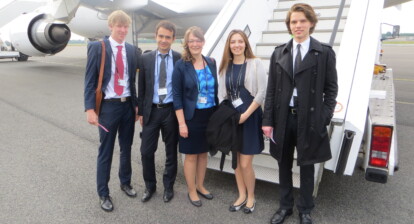