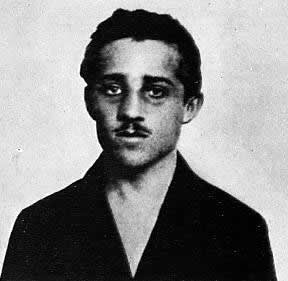 Gavrilo Princip, the assassin of Sarajevo

You can tell that the 100th anniversary of World War One (WWI) is approaching by observing the growing number of recent publications on the topic or by following the numerous debates about the reasons for the outbreak, about responsibility and guilt or about the impact of WWI on contemporary Europe. However, these debates look very different depending on which discussions you observe. Each country has different focal points and historical controversies that are subject to debates and revision.
Here on the Young History Forum we want to dig a little deeper and give you an insight into debates happening in different countries today. We are starting with the event that is known to have set the ball rolling: The assassination of the Austrian archduke Franz Ferdinand and his wife in Sarajevo on 28 July, 1914 by Gavrilo Princip, a Serb. He was a member of 'Young Bosnia’, an organisation of young Bosnians, Croats and Serbs, that promoted the ideas of a unification of the Southern Slavs.
How is that event commemorated in Serbia? And how was the commemoration subject to regime changes? 100 years after the outbreak of WWI, Kristina Jorgic, EUSTORY alumna and aspiring historian from Serbia is looking for traces of public remembrance of that event in her home country . From May 7-11, she will be one out of 400 young Europeans from 40 countries who participate at the HistoryCampus Europe 14/14  in Berlin to present and discuss different national perspectives on WWI among young people throughout Europe.

Even though in historiography causes and responsibility for WWI aren’t just put on one of the participating empires, the assassination marks the tipping point of events that lead to WWI. Does this confirm the thesis that Franz Ferdinand and his wife were the first victims of the war? Does it also mean that Gavrilo Princip and Serbia bear the burden of guilt and responsibility for the war’s outbreak?
Most Serbian historians believe that the assassination of Franz Ferdinand wasn’t the starting point of WWI. To understand the Serbian perspective it is important to mention the annexation of Bosnia and Herzegovina by the Austro-Hungarian Empire in 1908/09; it was an act that caused tensions between the Habsburg Empire on the one and the Russians and the Serbians on the other side and was considered a violation of the Treaty of Berlin. The question whether and how Serbian history has to be revised was first asked publicly in connection with the centenary of the Balkan Wars (2012/2013). The assassination of archduke Franz Ferdinand of Austria and the beginning of WWI were not a subject of revisionism until recently. However, with the approaching centenary of the First World War, a clear outline of the new interpretation of the Serbian role in it has appeared. As a consequence of the civil war in Bosnia, the British historian Christopher Clark, for instance, says that the role of Serbia during WWI had to be revised after looking at Serbian nationalism that was the driving force behind the massacre of Srebrenica.

As the starting point of my research, I chose the actual place of the assassination. After the Kingdom of Serbs, Croats and Slovenes came into existence after WWI in 1918, state authorities put a black commemorative plaque in the place from where Gavrilo Princip shot Franz Ferdinand. The plaque read: ‘Here, in this historical place, Gavrilo Princip was the initiator of liberty, on the day of St. Vitus, the 28th of June, 1914.’ 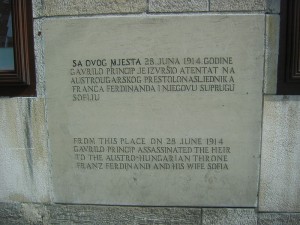 The Ustashe, a Croatian fascist and terrorist organisation, destroyed this plaque during WWII. After that war, Yugoslavia became a single-party state and the local authorities in Sarajevo placed a new commemorative plaque with the following text: 'From this place, 28 June 1914, Gavrilo Princip with his shooting expressed the people's protest against tyranny and centuries-long aspiration of our people for freedom.' During the civil war in Bosnia (1992-1995) the local government replaced the existing plaque with a new one: 'From this place on 28 June 1914 Gavrilo Princip assassinated the heir to the Austro-Hungarian throne Franz Ferdinand and his wife Sofia.'
The change of regimes was strongly reflected on the different memorial plaques and also explains the difficulty what to put on the new plaque planned for the 100thanniversary. 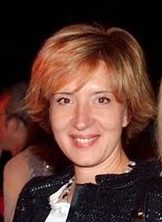 From plaques to books, I continued my research. Even more than in commemorative plates, the ‘official’ interpretation of history is shown in the way it is taught in schools. So I decided to speak to Jelena Kostic, a history teacher in a grammar school in Belgrade and also the organiser of the EUSTORY history competition in Serbia. During the 14 years of her career, the teaching material multiplied; instead of just one, teachers can use several textbooks now. Regardless of this fact, the image of the First World War differs not so much from earlier times. “I believe that the main difference is the following: in earlier times, the First World War was presented with greater patriotic fervour, as a heroic epos which only heroes and innocent victims lived. Today, our school books are deprived of the pathos, there is less emotion and they are more realistic.” Kostic also points out that her students are quite indifferent to the personality of Gavrilo Princip. “For them, Princip is just a figure from history textbooks and, as many others, the name of some street or school. However, I think that there is not any high school student who doesn’t not know who Gavrilo Princip is. At school they learn that Gavrilo Princip was a young man, their peer, a Yugoslav nationalist, convinced of the necessity of the liberation of the South Slav peoples and the destruction of the Austro-Hungarian Empire. But I don’t think that there is a political abuse of Gavrilo Princip in Serbia, probably because Yugoslavia does not exist anymore.”
So how should Serbia mark the centenary? While Serbian Newspapers headline 'Serbia must not celebrate the victory' or ‘Is Europe ready for the anniversary Serbia is planning?’, Kostic openly states that she is sceptical towards all anniversaries of historical events. “What exactly is going to be celebrated? Destruction? Death…?” Finally, Kostic says that Serbian historians should write about the First World War more often and that they should publish their works in foreign languages. As a historian, she believes this is the best way to engage in marking this anniversary. 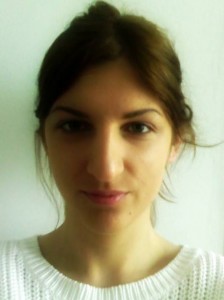 Kristina (24) is finishing her History BA in Novi Sad, Serbia. Her research interest is n Russian history and relations Serbia-Russian Empire through the history. She hopes to get the opportunity to do research in Russia.

I honestly believe that the 100th anniversary could be a great chance for Serbian historians. During this year, all countries that participated in the war will organise a lot of different activities to commemorate. My opinion is that Serbia should take part in these activities on an academic level. I see a tendency in the historiography in those countries that lost the war, such as Germany, Austria, Hungary or Turkey, to focus on the assassination in Sarajevo and to try to prove a connection between the Serbian government and Princip’s organisation. This would put the guilt for starting the war on Serbia’s shoulders instead of their own. I don’t want to clear Serbia from any guilt, but Serbia, as a small country with low economic capacity and limited military power, with the agrarian and illiterate population, had only the ambition to unify Southern Slavs. Serbia was not able to cause a conflict such as the First World War was, so I think that Serbian historians should present results of the current historiography in Serbia and openly discuss all controversial issues. And this is where I especially see the younger historians taking a leading role. The older generation of Serbian historians is quite isolated. They usually publish their books in Serbian only and don't want to discuss any historical controversy. But if you don't read and hear any opinions from the other point of view, you will not have the opportunity to gain a deeper knowledge. This is something we young historians have to change.

In this format we can only give a very condensed overview about the debate that happens in Europe. Please use the comment function in case you are interested in the debate, if you want to contribute with examples from your own country or if you want to ask Kristina for more information! 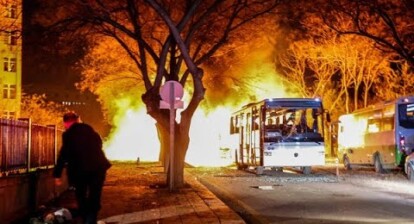 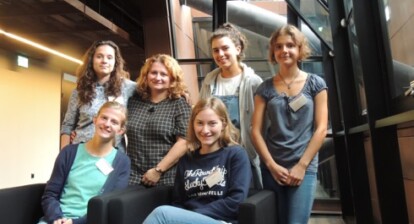 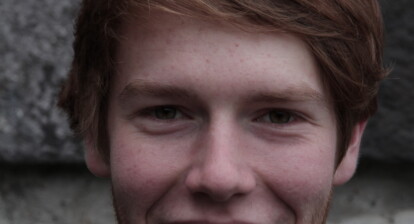 The »Concept of Trust« as a determining factor in Norwegian politics and society
16. September 2014
Previous ArticleApproaching WWI by means of theatreNext ArticleThe voices of Young Europeans
1 Comment