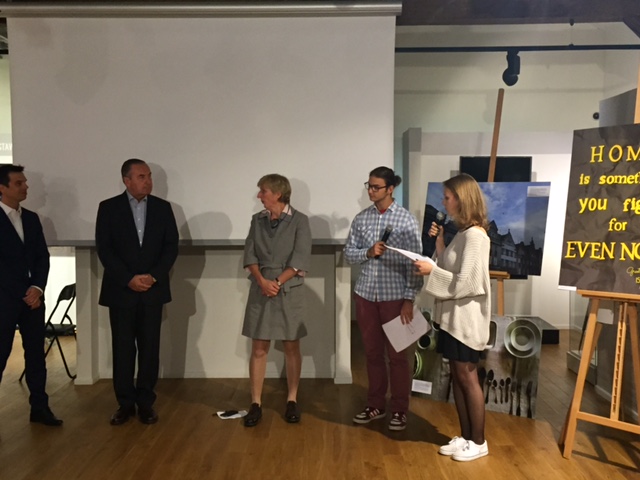 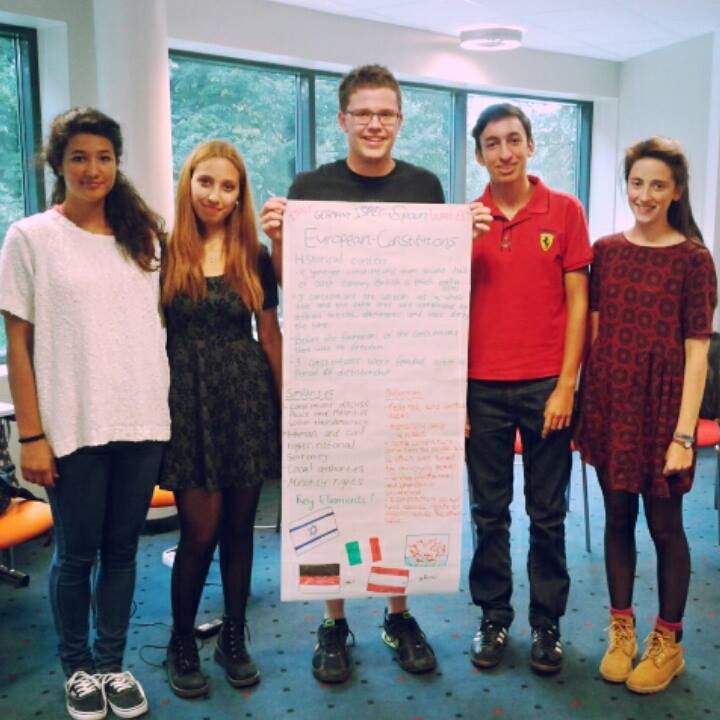 Today we started with an exchange about constitutions. We worked in groups and we discussed the differences and similarities of our countries‘ constitutions. By exchanging and discussing we worked out key elements of our constitutions; elements that we could find in all constitutions, only with different priorities. With the help of Karsten, the Norwegian organiser and a historian, who gave a presentation about Norway we familiarized ourselves with the fascinating Norwegian history. For example it was a surprise to find out that Norway was given to Sweden as a gift after Napoleon wars.

After lunch we went for a short walk in Oslo and got to know the city better. Starting in a part of Oslo which ist mostly populated by inhabitans with Somalian background, passing by a street festival with live music and street theatre, we walked back in history and visited the medieval fortress of Oslo and the City Hall. 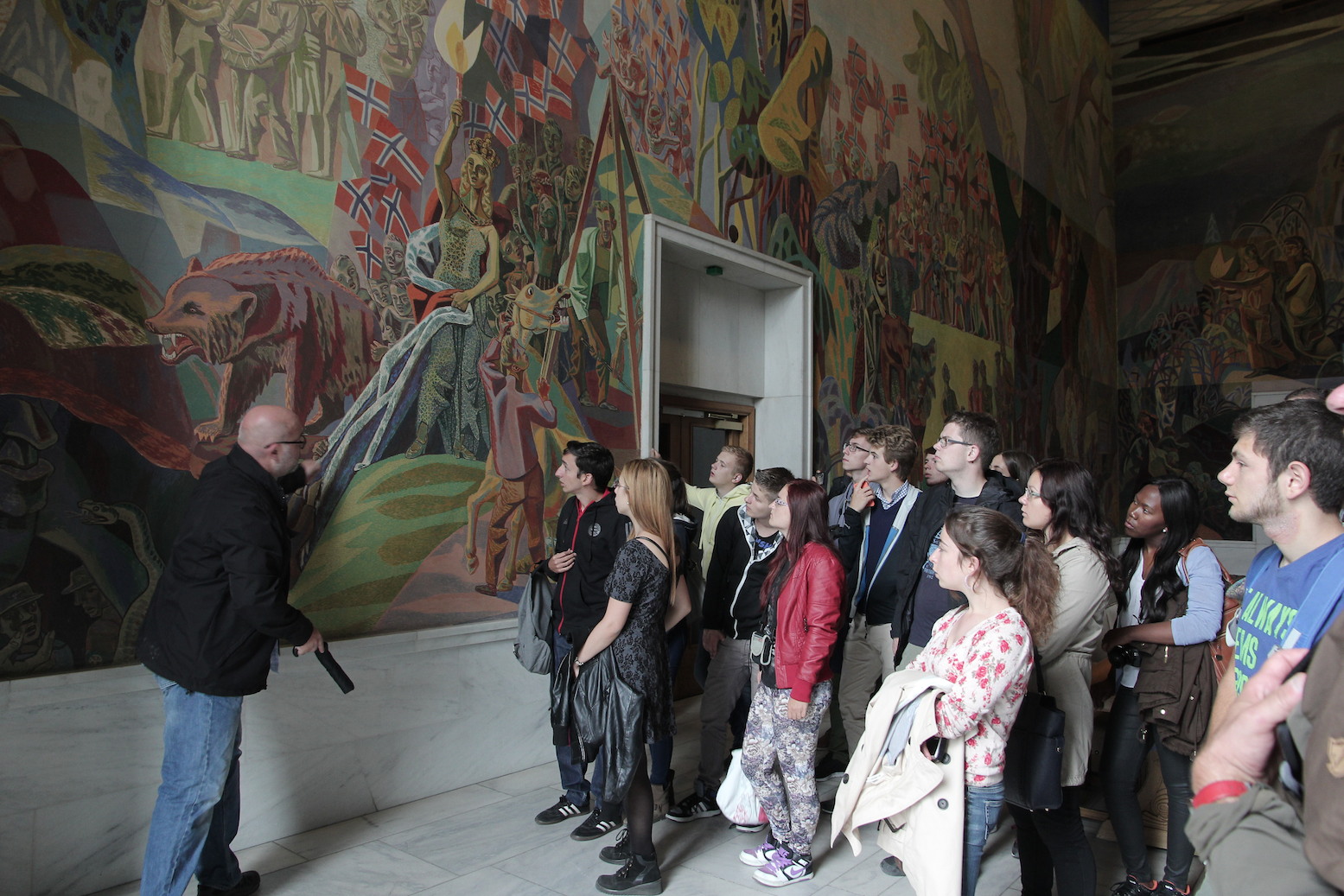 This really impressive building, red-brick with two towers is even more impressive from the inside. One of the room hosts a painting, that goes all around the wall, picturing the way how the idea of human rights made its way from the French Revolution to Norway and the main hall hosts the Peace Noble Prize ceremony every year.

Outside the City Hall

That brought us to our next stop: The Nobel Peace Prize Center. For the 200th anniversary of the Norwegian constitution they had set up an exhibition called “ Be Democracy“ about a social media and its influence on the world’s politics. Our guide was quite enthusiastic and she raised a lot of questions about freedom, democracy and participation. What impressed us the most was a big screen made of electronic devices that showed phrases visitors wrote about democracy. We learnt about the fragile boundry between freedom of speech and hurting democracy. We also discussed questions like whether we should limit freedom of speech in social media. We also got the chance to visit the exhibition about the Nobel Peace Prize winner that was also displayed in the Center. 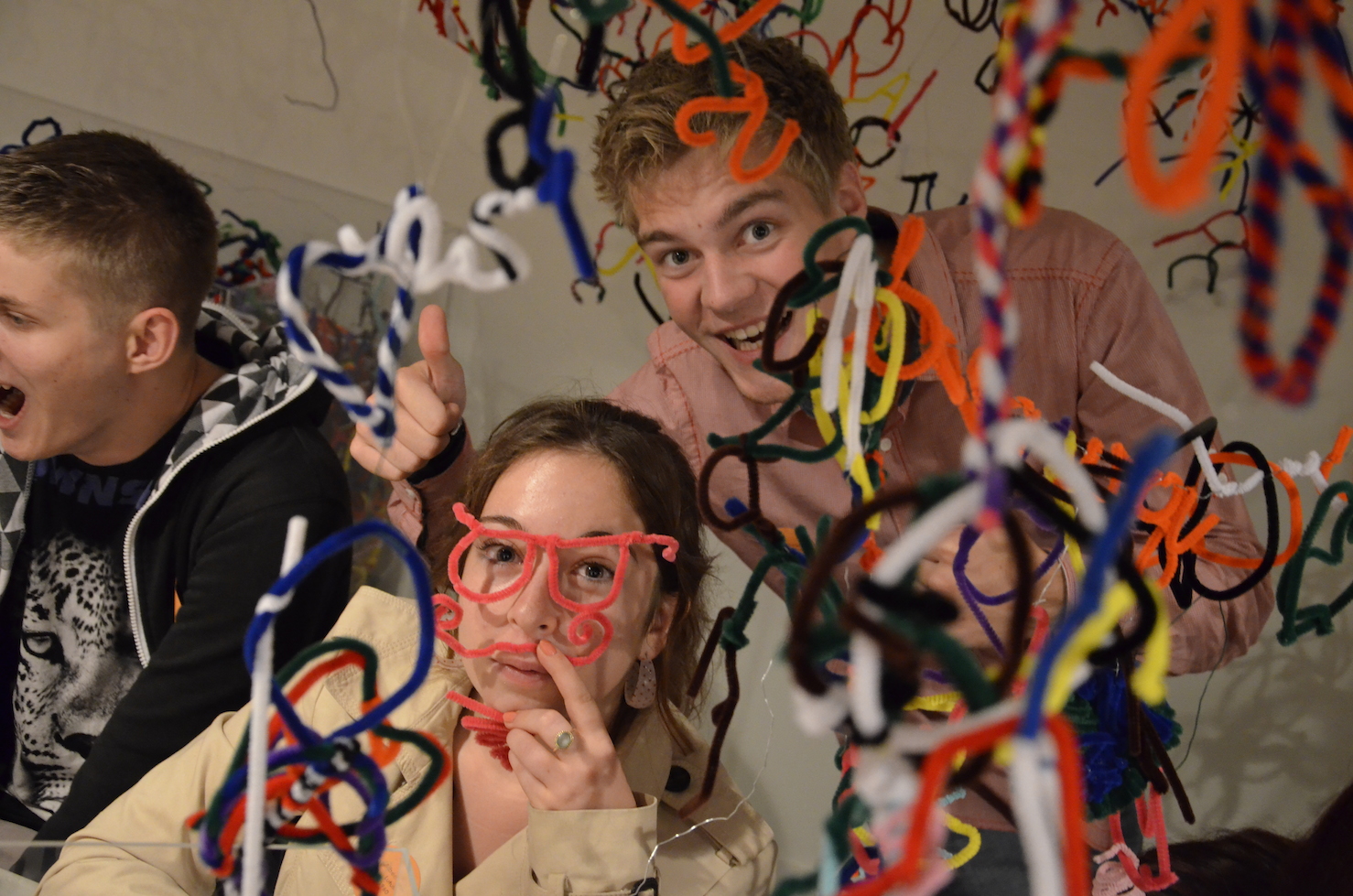 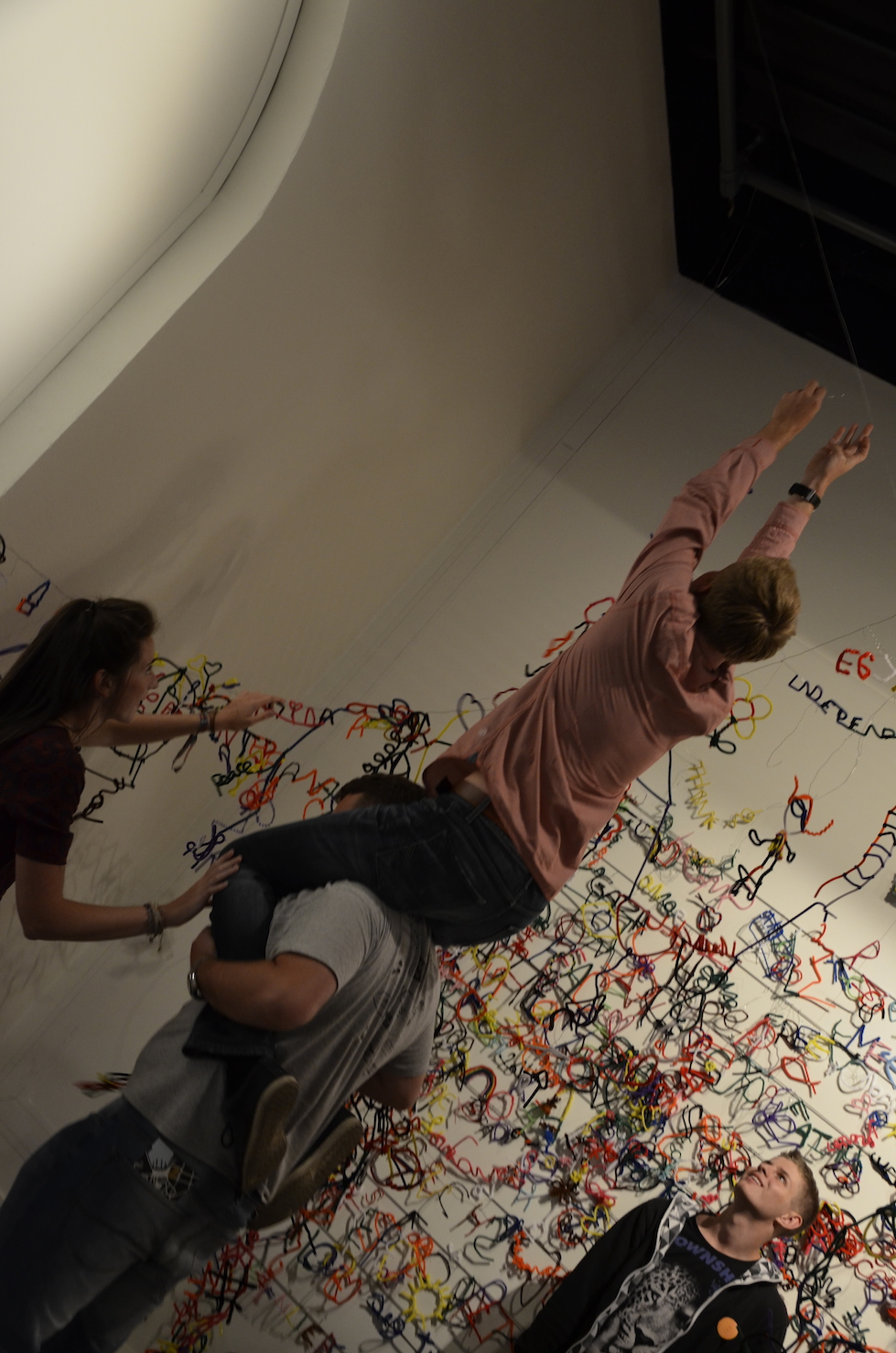 After a couple of hours of exploring, exhausted but satisfied, we took the metro to Frognerseteren restaurant. We didn’t know what was better – the food or the green view. We had some traditional Norwegian food. During the meal we tried to teach each other a little bit of our own languages, which was quite funny. Afterwards we split into two groups. Part of us was too tired so they went to the hotel and the taugh ones went to see Holmenkollbacken ski jump, a ski jump that had been in use since 1892, of course with constant modernisation. 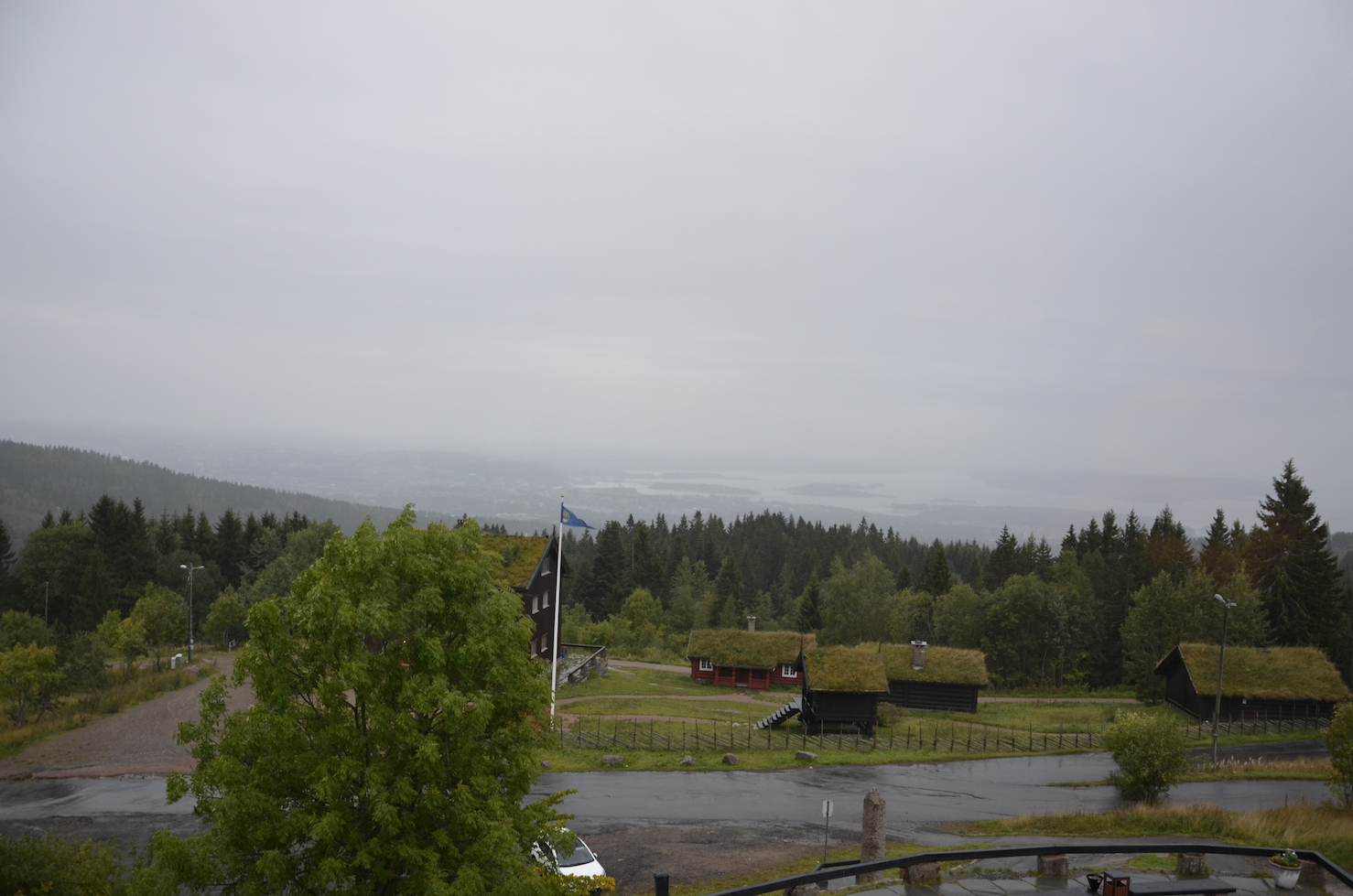 Written by Eustory-Blog
Here you can find reports from EUSTORY History Camps and other activities by young Europeans.
Tags: Constitution
Share This Post
You May Also Like