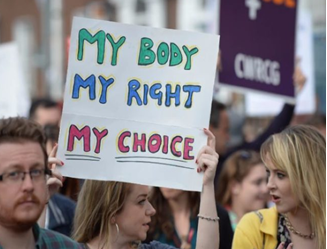 Written by Sarah
(Born in 1999) is an Irish student currently in her last year in secondary school. In the future she would like to study Law at the National University of Ireland, Galway (NUIG). Sarah has a keen interest in history and is an avid reader, who also enjoys playing traditional Irish sports such as camogie and ladies gaelic football.

Pro-Choice or Pro-Life? This divisive question concerning women’s reproductive rights is taking centre-stage in Europe: In March 2018, ten thousands took to the streets in Poland protesting against the toughening of the already strictest abortion laws in Europe. At the same time in Germany a heated discussion is going on about the laws governing the access to reliable and neutral information on the termination of unwanted pregnancies. And in Ireland, the government will hold a referendum on 25 May 2018 concerning the repeal or retention of the Eighth Amendment, which only allows terminations of pregnancies if the life of the mother is in danger.

Our author Sarah interviewed three 18-year-old Irish students about the upcoming referendum in Ireland, the influence of the Catholic Church and their young perspective on the controversial topic of #RepealTheEighth.

The Irish government have announced a referendum at the end of May in relation to the Eighth Amendment. The amendment recognises the life of an unborn child and gives equal rights to the foetus and the pregnant woman. Ireland, being a largely traditional Catholic country, will be giving its voters the chance to repeal or retain this aspect of the country’s constitution. Currently terminations in the Republic of Ireland are only permitted if the life of the mother is in danger. Many women have had to travel to England over the years in order to access abortion clinics that are illegal in Ireland. In 2016 alone, 3,265 women and girls gave Irish addresses at UK abortion services.

There are mixed emotions currently circulating amongst the Irish, with Pro-Choice and Pro-Life opinions clashing nationwide. Pro-Choice members agree that the Eighth Amendment must be repealed in order to respect and protect the lives, health and choices of women in Ireland. Opposition from the Pro-Life campaigners argue for the lawful protection of the unborn child.

“Who am I to say what someone can or cannot do?” – Three 18 year old students on a controversial topic 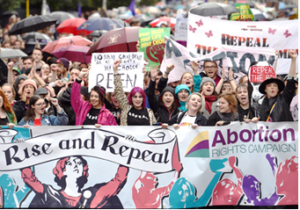 The abortion referendum has caused a stir throughout the country. It has surprisingly awoken a consciousness amongst the young people of Ireland, some of whom will be voting for the first time this May. Sarah raised a number of questions, surrounding the eighth amendment, to some of her fellow female classmates.  All have recently turned eighteen….

Emer is the eldest child in a family of seven children. She was raised by a staunch religious family, is a practising Catholic and regularly attends mass. Thus, her beliefs are of utmost importance to her. It have caused her to struggle with fully committing herself to a either a Yes or No vote.

Aishling is the youngest in a family of two children. Her opinion is plain and simple when it comes to the topic of abortion. She believes everyone should respect the choices of others and does not see any reason for religion to impact on the referendum. Aishling does not hesitate to debate the matter amongst others.

Tara is the youngest child in a family of four.  Tara has found it very hard to decide on which side of the vote she stands. Tara dislikes committing herself to a particular voting stance and prefers not to engage in heated discussion on the matter.

The topic of abortion is at its high point in Ireland at the moment, have you any particular opinion on this topic?

Emer: I feel older people, and people themselves who have never experienced the process of considering abortion, oppose it without fully considering the feelings, emotions and circumstances of those wishing to have an abortion. I personally do not agree with abortion and the killing of an unborn child. However, I do not possess the right to deny someone else the opportunity to have an abortion if they wish to do so. Who am I to say what someone can or cannot do? I do not know their background, issues or what they have gone through. Victims of rape, sexual abuse, depression and countless other horrific circumstances, may not have the mental, physical or emotional capacity to look after a child.

Aishling: I feel that abortion should be legalised in our country. It’s as simple as that.

Tara: I think abortion should be legalised. Firstly, because I don’t feel anyone should have the right to control another woman’s life. Secondly, I don’t feel it will become a means of contraception as there will be rules concerning it, as there is with everything in this country.

Do you think any specific circumstances need to be taken into account ?

Emer: While I do think the eighth amendment should be repealed. I believe granting access to abortion in Ireland should depend on how far the pregnancy has progressed. After twelve weeks, a foetus is recognisably human with fingers, toes and organs formed. I believe abortion should be allowed within the very early stage of pregnancy and no further. Once the foetus is recognisably human, it should possess the same rights as every other human, one of the most important: the right to life. After the upcoming referendum to repeal the eighth amendment, I do think a follow up referendum should be held to decide on the conditions on which permission to access abortion should be granted. Abortion is a sensitive matter and will engross the country on a rather long path. It will be difficult to find an appropriate solution that will take into account the rights of the mother and the unborn child. Circumstances such as danger to the mother’s life need to be examined. Strong regulations would need to be implied. Ones that ensure this is not used merely as a method of contraception or a quick fix to a child with disability or ailment.

Aishling: No, I do not believe that women should be forced to deal with unplanned pregnancy. Not under any circumstances, it’s their body and thereby, their own right.

The Irish Times. Photograph: Alan Betson: An older picture of an anti abortion demonstration in Dublin

Tara: I was originally split on this topic. Yes, abortion means taking a life away, but I came to understand it is unfair to bring a child into this world, if it’s going to experience a cruel or miserable upbringing. Or worse still, cause the death of the mother which is unacceptable in my opinion. Also in relation to victims of rape, I feel it is unfair to force someone who has already gone through so much, to be reminded of that person who attacked them every time they look at their child.

Do you think the views of the Catholic Church will effectively influence the opinion of voters?

Aishling: Personally I feel that the Catholic Church should stop telling women what they can, and can’t do with their own bodies.

Emer:The strong influence of the Catholic Church throughout our past, has to a certain extent, noticeably impacted on the matter. I see that religion is somewhat declining amongst young people these days. I feel it may not have as great an influence on the upcoming election, as it might have had years ago. Though I still feel the influence of the church will influence the opinions of the elderly.

Written by Sarah
(Born in 1999) is an Irish student currently in her last year in secondary school. In the future she would like to study Law at the National University of Ireland, Galway (NUIG). Sarah has a keen interest in history and is an avid reader, who also enjoys playing traditional Irish sports such as camogie and ladies gaelic football.
Tags: Abortion, Election, Interview, Ireland, Referendum, Religion
Share This Post
You May Also Like 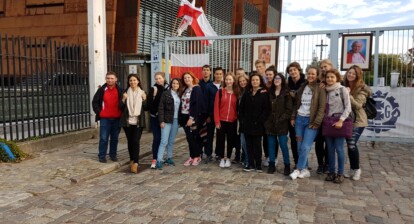 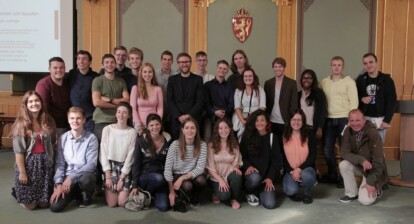 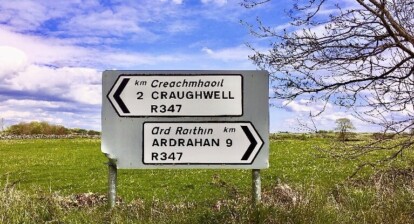