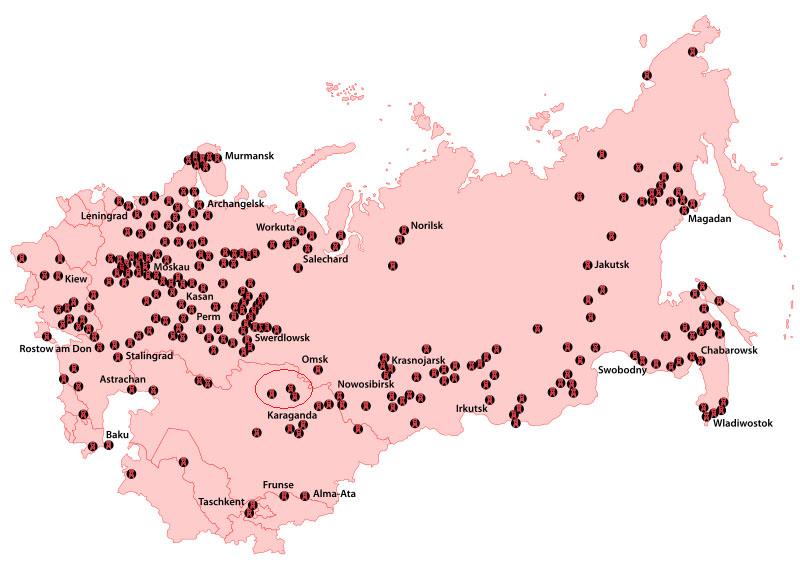 A map of the Gulag camp system in the Soviet Union. Indicated in red: The camp Akmolinsk Camp for Wives of Traitors of the Motherland. Source: Wikimedia Commons, License CC0, NordNordWest. Link: https://de.wikipedia.org/wiki/Gulag#/media/File:Gulag_location_map_de.svg

Left: Tandem partners Marika Abazadze (Georgia) and Stefan Holzer (Austria), August 2015 in Berlin. Photo: Agency for Historical, Civic and Media Education, Berlin; Right: The fence and guard tower at the Soviet forced labor camp Perm-36, 100 km northeast of the city of Perm in Russia. The last remaining example of a Gulag labor camp, the site has been preserved as a museum and was forced to close in April 2014, officially due to financial reasons. Source: Wikimedia Commons, Gerald Praschl, CC BY-SA 3.0

In spite of a distance of 3000 kilometers, the former “Iron Curtain” and other obstacles, we, Mari from Tbilisi and Stefan from Vienna, are now discussing these diverse episodes of history in Berlin. The shared fate, the shared experience, can build bridges until today. 70 years after the end of WW II, we try to compare memories of people. Our interest is to focus on those who were underage at that time, children of war; but from different angles and with our different national backgrounds in mind. How did these child prisoners experience their time in captivity? What traces of children of war can be still found today? 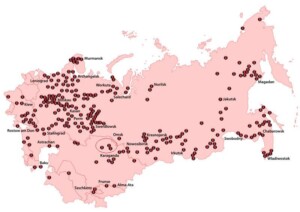 A map of the Gulag camp system in the Soviet Union. Indicated in red: The camp Akmolinsk Camp for Wives of Traitors of the Motherland. (Source: Wikimedia Commons, License CC0, NordNordWest. Link: https://de.wikipedia.org/wiki/Gulag#/media/ File:Gulag_location_map_de.svg)

A whole generation of children were born and raised in Soviet Gulag Camps (Main Administration of Corrective Labor Camps) during the period starting in the 1930s and ending in the 1950s. During WWII and shortly afterwards, many German (child) soldiers were captured by the advancing Soviet troops and afterwards brought to Gulags and special POW labor camps in different parts of the Soviet Union. Living conditions in the Gulags were inhuman, especially for children. The time in the work camps affected their lives and personalities in many ways and often resulted in their death.

More than 1 million detainees died in Gulags. However, the goal of the Soviet Union to boost the country’s economy by the free and cheap labor force (a usual working day consisted of 12 hours of work in the freezing cold) turned out to be highly ineffective. Starvation and separation from the loved ones, life in old and cold barracks and the lack of freedom and all forms of self-expression inhibited effective work.The Soviet Propaganda suggested that all children living within its confines had a fairy tale childhood and that everyone would work for their bright future and equality. Reality was the opposite. 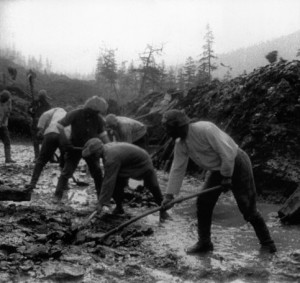 Construction of the bridge through the river Kolyma by the forced labourers of the Dalstroy (part of the ‘Road of Bones’ from Magadan to Jakutsk).
(Source: Wikimedia Commons, Public Domain. Link: https://commons.wikimedia.org/wiki/File:Kolyma_road00.jpg)

An unknown number of children were separated from their parents when the latter were imprisoned by the Soviet NKWD. The children often remained on their own and had to struggle to survive. It is a rather unknown fact that some of them managed to visit their parents in the Gulags.

“They all were far, in a distant separated place, but I put my hand through the fence, and I remember how these women rushed at my hand, they caressed my hand and cried…” recalls Gina Mikadze-Kalatozishvili, who keeps the memories of her mother, Raisa Abramia Mikadze, who was placed in a special camp for repressed women in Akmolinsk. Her mother came back only after eight years.

Besides being affected by the loss of close relatives, German child soldiers were sent to Soviet labor camps themselves. Guenter Lucks, member of the SS and POW, recalls the day when he left his hometown Hamburg: “My childhood ended on a cold winter day in 1945. I was 16 years old […] and I knew that my life would change radically now.” After being captured by the Soviets in 1945,Guenter Lucks was kept in different prison and labour camps for five years. During this time of atrocities and hardship, Guenter suffered a lot due to hunger, cold and excessive work.

For further information on Raisa Abramia Mikadze and Guenter Lucks  please have a look at the enclosed biographies. 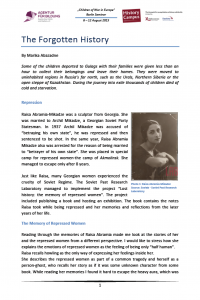 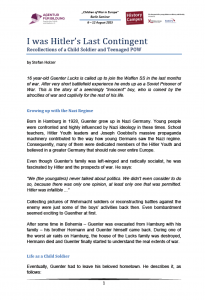 Dealing with fates of children, who were affected by the Soviet prison camps, made us aware of all the different people who were taken prisoner and oppressed by the Stalin regime. Looking closely at the stories of Guenter and Raisa, we felt that the History of prisoner camps signifies the destroyed lives of thousands of people, loss of their friends and loved ones, destroyed health and years spent in forced labor camp in unbearable living conditions. To us, this is the story of children who were left all alone to spend their years of childhood at the Soviet camps and orphanages, without proper care, food and shelter. Looking at the fates of the real persons and their real stories we discovered that this is the story of many unwritten books, discoveries that never became publicly known, and the dreams that never came true.

Mari Abazadze
Born in 1992, Marika is enrolled in LLM program of international Law in Georgian Institute of Public Affairs in Tbilisi, Georgia. She is interested in creative writing, contemporary arts and music.

Stefan Holzer
Born in 1997, Stefan has just finished high school in Krems, Austria. After his civil service at the Red Cross, he is planning to study law at the University of Vienna. He enjoys traveling and meeting new people from all over the world as well as enjoying a good Viennese Schnitzel in Austria.