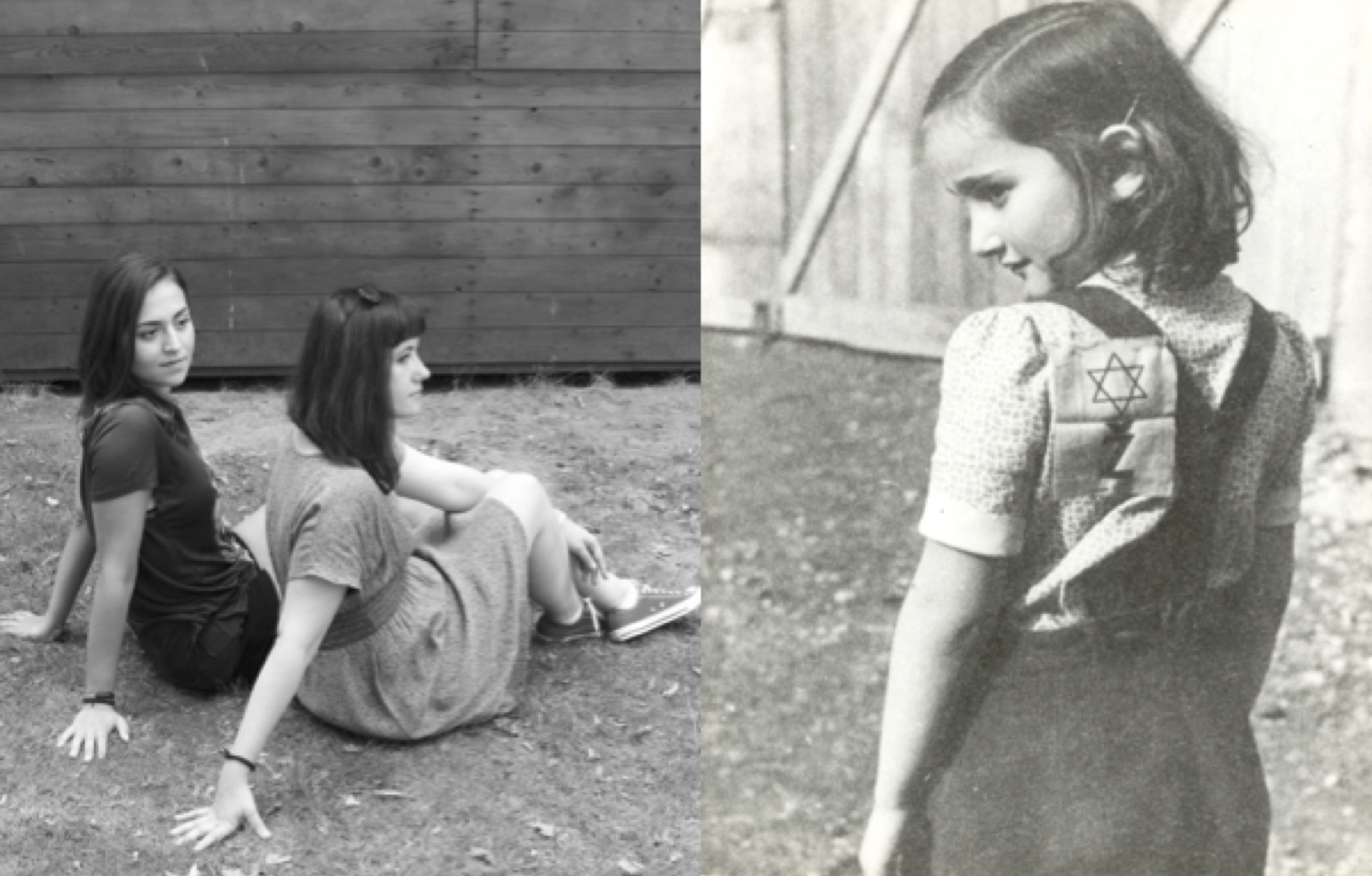 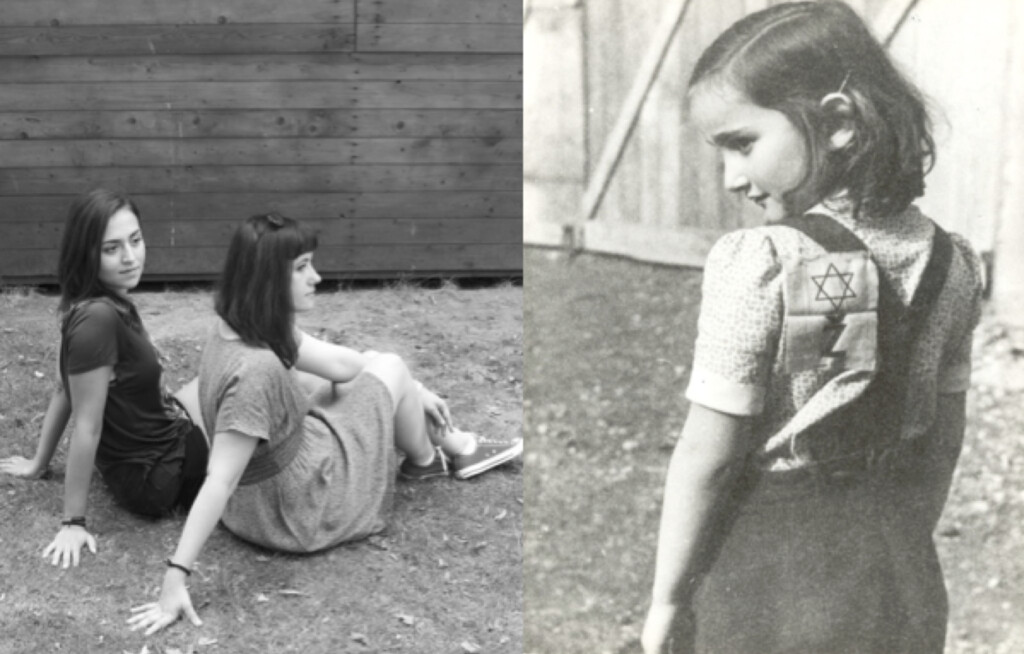 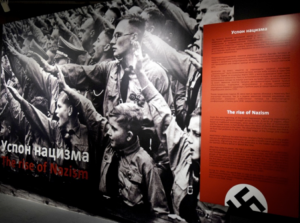 Introducing the Scene: Serbia and Greece

Just after the occupation of Yugoslavia in 1941 and the division of the country in different occupied zones, the Independent State of Croatia (ISC), a puppet state of Nazi-Germany, was formed. The country was governed by the fascist Ustasha movement, which persecuted Jews, as well as Serbian and Roma people on the basis of their fascist and inhuman ideology. Around 75,000 children lost their life during the ISC time, many of them in concentration camps, like Jasenovac, Stara Gradiška, Sisak, and others. Regarding the Jewish community, it was small, only 0,5% of the population. The Jewish male population was almost extinguished by the Nazis, supported by Ustasha. Most of the women and children died in extermination camps in Yugoslavia and the remaining ones were transported to Nazi death camps. Out of a total of 82,000 Jews living in Yugoslavia before the war, only 15,000 managed to survive.

The Axis Forces occupied Greece in 1941 and divided the country in 3 occupied zones: A German, an Italian and a Bulgarian zone. Thessaloniki was under the German Nazi rule. At that time, the Jewish community counted 50,000 members. Anti-Jewish measures got worse in 1943, when the deportation to Auschwitz began. Regarding the case of children which were deported to the concentration camps, most of them were executed upon their arrival, since they were not able to work. In total the Nazis murdered 96% of the population that was deported there and only 2,000 Jews from Thessaloniki managed to survive.

Thessaloniki, Spring 1943. A train whistles. People, suitcases and hopes packed in wagons. Yaacov (15) and his family even changed their Greek money into Polish Zloty, believing that they were heading to a new life in Poland. However, they realize soon that their final destination will not be a new life, but a concentration camp. After a 6 day journey they arrive at Auschwitz.

Serbia, one year later. Raul (14) and his parents are loaded onto the last train with Pristina Jews heading to the Staro Sajmište camp; the first stop before Bergen-Belsen concentration camp. The thirst and the hunger are terrible. No one knows what will happen next. It is the first time they realize that they have to struggle for their survival.

In another Yugoslavian occupation zone, Milan (3), as well as his mother and sister, are transferred to Jastrebarsko concentration camp, controlled by the Ustasha forces. What they do not know is that 4 more deportations would follow. 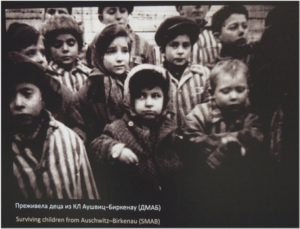 Auschwitz extermination camp, April 1943 – April 1944. Hunger, torture and forced labor are the daily routine in the camp. But for Yacoov these dreadful physical conditions are not the worst he has to go through. Dealing with fear and loneliness is the scariest part.

Bergen-Belsen concentration camp, winter 1944. Raul’s stomach is empty, finding food is his only objective, everything else is eliminated from his mind. People around him move like ghosts. Everything, the dead and the living are mixed together. Lice and typhus spread quickly.

Stara Gradiska concentration camp, Spring 1942. Little Milan picks nettle to eat, because of the great starvation in the camp. The adults search through the trash remains to find at least something to feed their children. 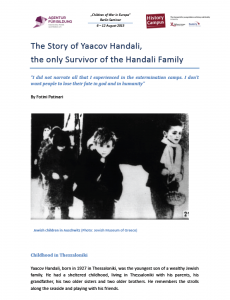 From Auschwitz to Bergen-Belsen, January 1945. A death march starts from Auschwitz as the camp is evacuated. After three nights of walking in the cold with neither rest nor food, Yacoov boards a train that will transfer the prisoners to Bergen-Belsen camp. How would you try to survive, if you were locked up in a train wagon without water for 9 days? Bergen-Belsen is the last stop. On April 1945, the camp is liberated.

A year later, Yaacov sleeps in the safety of the American sector. Under his bed there is still a piece of bread. Even though he is not hungry anymore, the fear is still there.

If you would like to read more about Yaacov’s life as a prisoner, check out Fotini’s synopsis of Yaacovs’ book From the White Tower to Auschwitz.

From Bergen-Belsen to freedom, April 1945. Last days of war, last prisoners’ transports. Raul is loaded on a train. After a two weeks journey through Germany, the train stops, the German guards are gone, the prisoners crawl out of the wagon and spot the Red Army approaching. They are free! 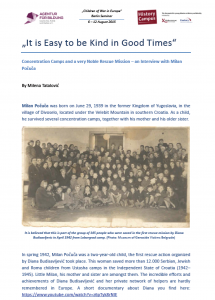 From Loborgrad camp to Belgrade, Spring 1942. A train arrives at Belgrade station. It is the first rescue action organized by Diana Budisavljević. This woman saved more than 12.000 Serbian, Jewish and Roma children from Ustasha camps in the Independent State of Croatia (1942–1945). Little Milan, his mother and sister are amongst them. Waiting for liberation in Belgrade shelters and not in the camps brings new hope. In the years of liberation after his rescue, Milan, like Yaacov, still comforts himself with a piece of bread in his hands during the night.

If you want to learn more about Milan’s experiences and how he tries to process them, check out Milena’s interview with him: “It is easy to be kind in good times”.

Behind the Scenes: Culture of Remembrance

During the tandem research, our ambition was not only to provide historical facts, but to listen to the voices of the child survivors, who might have been overheard. It was a difficult task, since in Serbia and in Greece, the traces of remembrance of war children are not prominent. In Thessaloniki, there is no memorial, and data about Jewish children is missing. In Belgrade, there is no clear vision on how to make the Sajmište camp site a part of collective memory. For us, personal stories are a way to strengthen this remembrance and a chance to walk in another person’s shoes for a while. Milan, Yaacov and Raul are here to remind us that we cannot allow ourselves to forget. In order to give more child survivors the attention they deserve, we collected quotations of hidden children, of children who suffered from the occupation and of children who survived concentration camps. Read their statements here.

Fotini Patinari
from Thessaloniki has studied pedagogy and intercultural education, has worked as a teacher with Roma children and is now studying German language and literature. She loves travelling, history and dancing salsa. Her dream is to travel the world and teach in different countries.

Milena Tatalović
(1987) is a Eustorian from Serbia studying sociology. But her main interests are family history, ethnology, social interaction, and places where people gather like traditional pubs with historical background. She plans to travel a bit more and perfect the skill of traditional pastry making. She hopes  to work for UNICEF one day.