This text will introduce you to children’s stories from WWII collected by us, two young students from Slovenia and Serbia. We asked ourselves: What did the generation of our grandparents experience during WWII? How are the fates of war children from these two former Yugoslavian republics commemorated in our countries? Do they have much in common, what are the differences?

History is both public and private narratives

We would like to share stories of children in Yugoslavia of which we have first-hand account of our family members. In addition, we collected some very well-known stories of war children who fought against the Nazi occupation and who were regarded as war heroes in Yugoslavia. The six biographies presented – the ones from our families as well as the ones well-known and officially commemorated in former Yugoslavia – are the fates of children of different ages who fought their personal battles during and after the war. Each of these battles were different. Some of the children had to deal with home and family losses, others with lost childhoods as such and some even took an active part in battles. However, before presenting fascinating children’s biographies, we would like to provide an insight to what happened when we tried to compose a short historical background for our readers who might not be that familiar with Yugoslavian history.

It was challenging. In our home countries, we both studied Yugoslavian history, but researching and discussing the history of WWII during the international History Camp on War Children in Europe, we realized that we studied it from two completely different perspectives. Sometimes, even the accounts of the very same event differed in the way it is commemorated in each of our countries. What we learned from this is that history, although it belongs to the academic field of humanities, can be very subjective. For example, we realized that in our countries the interpretation of the different resistance movements differs a lot – we were raised with different verdicts about which resistance movements were important and “who the bad and who the good guys were”. At the end of our intense debates, we realized that we were not actually taught different facts at our schools, but different aspects were pointed out; resulting in quite different images of the same historical events in our minds. 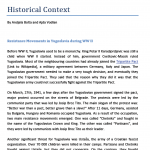 Finally, we agreed on how we want to present the, both Slovenian and Serbian, puzzles of Yugoslavian history to you. See our short introduction to circumstances and historical events that were responsible for the formation of resistance movements in Yugoslavia. This context could be important in order to understand the family stories of children of war in Yugoslavia.

In War, there is Hardly a Choice: Four family stories

Like it happens during wars, all the adult, healthy men joined the army. Some decided to fight on the side of Partisans, some of them decided to join the Chetniks. Not only that but, usually if there were two sons in a family, one of them would join the Chetniks and the other one joined the Partisans. Thus, their family could have security and privileges if any of these two sides won. For example, my great-grandfather fought for the Chetniks, but there is still a street named after his brother in Belgrade, who was one of the best known Partisan soldiers. 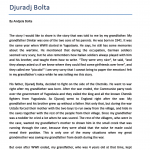 The first story that we would like to share is about two boys whose father joined the Chetniks. Not only did they grew up without a father who was at war at first, and after was expelled from Yugoslavia, marked as a traitor, but they were also discriminated by society while growing up, marked as traitors children. For these two and many other non-Partisan children, suffering did not end with the end of the war. This is the story of one of the author’s family members. 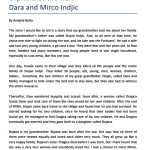 The next story, also about a family member’s fate, is about children whose entire family was murdered while they were hiding under their bed. 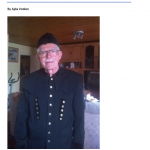 This story is about a grandfather of Ajda Vodlan (Slovenia). When the war reached his home, he was a ten-year-old boy whose home was burned because his father was a partisan and he was forced to escape far away from home. His father was killed by the Nazis. He had to be all by himself and had to work for food.

War does not have an Age Restriction: Children Fighting in Combat 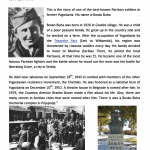 The first story is about a boy called Bosko Buha. Bosko was a skilled fighter in the Partisan movement and was celebrated as a national hero in Yugoslavia. Until today, he is still glorified in Serbia. His name is very famous and many streets and institutions all around Serbia were named after him. You can read his brief biography here. 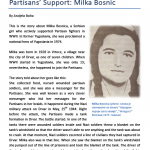 The second story is about a sixteen year old girl who lost her life because she helped the Partisans during a battle. She was officially announced to be a national hero of Yugoslavia a couple of years after the war. 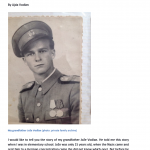 In school, we still learn that the Resistance in Slovenia and Yugoslavia were only Partisans. In public opinion, all the other groups were just collaborators. And there are heroic stories about Partisans who dreamed about a communistic future – equality for all. The reality was far less heroic. For example, Janko said: “We were not interested in politics. We did not discuss who would have the power after the war. We just wanted to survive the day and when someone conquered our area, we were just quiet. If the Germans came first, you went to the Wehrmacht. If the Partisans came, you became a Partisan. If the Domobranci (another resistance group which later collaborated with the Germans) came, you became a Domobranec.”

History is far less heroic than it is often presented to us. All great revolutions were not that great in reality. Only a few people have ideological dreams about the future, most of the people just want to survive the day. National heroes are national heroes because someone, often the government, decided, that their story should be remembered, mostly because of their attribution towards the national state. People like stories and need some heroes. But reality is cruel and non-ideological. Their stories should be rather told with objective facts. In fact, mostly all stories should be told – everything what happened in Yugoslavia, on all sides: why people did what they did.

Andjela Bolta
born 1992 in Serbia, Andjela is currently a philosophy student in University of Belgrade and also UNICEF volunteer. Her passion is karate which she practises since she was four. In her free time she likes traveling, meeting new people and cultures and playing piano.

Ajda Vodlan
born in 1990 in Slovenia, Ajda is finishing her master in Defence studies and did her bachelor in Political Sciences. She is passionate about politics, history, justice and national security issues. In her free time, she likes reading books, writing, cooking and travelling.