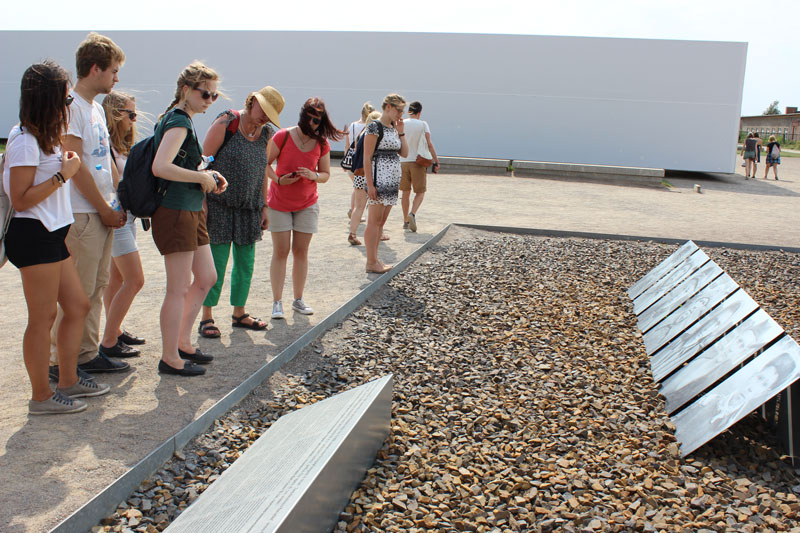 The participants in the so-called “industrial yard” at Sachsenhausen Memorial, August 2015. They are standing in front of a former barrack where more than 10,000 Soviet POWs were murdered by a shot in the neck. (Photo: Johanna Strunge)

Our visit of the Memorial and Museum Sachsenhausen

»Captain, I can work.« With these few words, 8-year-old Thomas Buergenthal from Czechoslovakia, facing the gas chambers in Auschwitz-Birkenau, saved his life. Working as an errand boy, he was eventually deported to Sachsenhausen, a concentration camp near the capital of the German Reich. On Saturday, 8th August 2015, 18 young Europeans and three facilitators made up their way to the city of Oranienburg, seeking the traces of children’s biographies that were deported to German concentration camps. 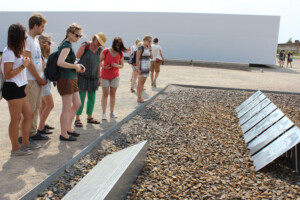 The participants in the so-called “industrial yard” at Sachsenhausen Memorial, August 2015. They are standing in front of a former barrack where more than 10,000 Soviet POWs were murdered by a shot in the neck. (Photo: Agency for Historical, Civic and Media Education, Berlin

The history of the camp

Sachsenhausen concentration camp was built in 1936 on the orders of Reichsführer SS Heinrich Himmler, who wanted to establish a new, modern, ideal and easy expandable concentration camp. Architect Bernhard Kuiper created the concentration camp in the form of an equilateral triangle with its prisoner’s barracks grouped symmetrically around one central watchtower – the so-called Tower A. Between 1936 and 1945, more than 204,000 people were deported to Sachsenhausen, of whom tens of thousands of people did not survive the forced labor and the living conditions or were murdered in mass shooting operations.

The National Socialists declared whole groups of people to be racially or biologically inferior. The victims deported to concentration camps were mainly political opponents, Jews, Gypsies, Homosexuals, Jehovah’s witnesses, so-called “Anti-Socials” (people who were considered to be socially inferior, like homeless people or persons suffering from alcoholic abuse) and so-called “Berufsverbrecher” (“professional criminals”, people who have had several criminal records and were deported “preventively” into the camps).

Approximately 3,000 of the over 200,000 prisoners in Sachsenhausen were under the age of 18. They came from Poland, Czechoslovakia, the Soviet Union, Germany and many other countries. Their stories were, needless to say, completely different.

Saul Oren Hornfeld and Wolf Silberglet, 14 and 8 years old in 1943 and originally from Upper Silesia, were abused for medical experiments. The German immunologist Arnold Dohmen infected the two boys and 9 other young people with jaundice to identify the pathogens of hepatitis . All 11 children survived the experiments.

The initially quoted Thomas Buergenthal, born in 1934, was deported together with his parents to Auschwitz and, in the course of the dissolution of the extermination camp, to Sachsenhausen. He and his mother survived while his father was murdered in Flossenbuerg. After his dreadful experiences in the German concentration camps, Thomas Buergenthal dedicated his life to international law and the protection of human rights, being a judge at the International Law Court of Justice in The Hague.

In the video, you’ll also see the book “To Hope or Die” of Edmund Szybicki in the hand of one of the participants. Edmund Szybicki was a teenager when German troops occupied Poland. He was engaged in the Polish resistance movement and participated in the Warsaw uprising in 1944. For the first time after the war, he only came back to Sachsenhausen Memorial in 2014. 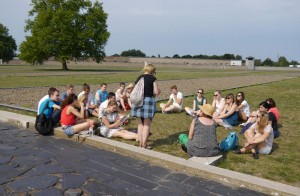 The participants sitting in the former prisoner’s camp (“Häftlingslager”) in Sachsenhausen, August 2015. The gravel surfaces in the background depict the area of the barracks. (Photo: Agency for Historical, Civic and Media Education, Berlin)

These stories and many others were told by our guide Ingrid Bettwieser, freelancer for the pedagogical section at Sachsenhausen memorial, who prepared especially for us a guided tour with the focus on children. She brought us some pictures and even prepared quotations of former child and youth prisoners. It must have taken her days to customize the tour to our wishes. We especially would like to thank you, Ingrid, for the great efforts you made!

The film of our visit was made by Rafael Jiménez Montoya, who wants to become a film director after his studies of Audiovisual Communication. In his application for the project “children of war”, Rafael wrote: “I want to tell stories normal people wouldn’t tell. […] I really love films that tell the life of anonymous people that history has forgotten.” We firmly believe that your dream, Rafael, will become true one day. Thank you very much that you took care of the documentation of our visit!

Astrid Ley: Children as victims of medical experiments in concentration camps, S. 43; in: Thomas Beddies (ed.): In memory of the children, 2011.

Thomas Buergenthal, A lucky child. A memoir of surviving Auschwitz as a young boy, Back Bay books 2010.

Edmund Szybicki: To hope or die. From Warsaw Uprising to Sachsenhausen concentration camp and after: Memoirs of a survivor, Athena Press 2007.