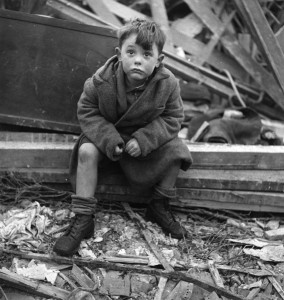 Initiated and financed by the Körber Foundation
Operating partner: Agency for Historical, Civic and Media Education, Berlin
Duration: April to September 2015, including a History Camp in Berlin (6-12 August 2015) 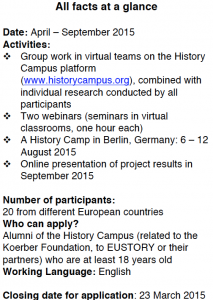 2015 marks the 70th anniversary of the end of Second World War. There are people who witnessed the war as children who are still alive today. What are their personal experiences? How did they cope with their often traumatic past? And why are not all of their fates anchored in the collective memory of their countries?

Children’s experiences during WWII are unique but they can be quite similar at the same time. Many of those experiences have had a lifelong impact on them. In this project you will approach this complex issue by dealing with individual fates of War Children. Fates you might not know from your textbooks. Various groups are associated with the term War Child throughout Europe.

Possible topics and groups that could be considered for research are: 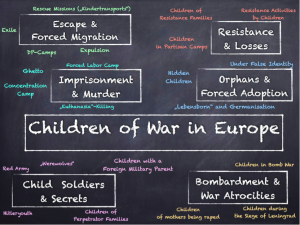 By researching their stories you will get insights into the consequences of warfare on children. In addition you will deal with challenges of European memories in plenary sessions and in bi-national tandems. You are going to look beyond and analyse how fates of War Children were perceived in the post-conflict societies, thus aiming at understanding different social climates and national discourses in Europe. What is the reason that some fates are remembered at specific times while others fall into oblivion? What conclusions can be drawn while dealing with the past in different societies in Europe?

Finally, you are going to reflect on today’s relevance of your findings: What benefits can be drawn from the study of the biographies in view of conflicts and war zones today? What is your assessment of the fact that again an increasing number of minor war refugees reach Europe these days?