Since 2014, the war in Syria has escalated dramatically – about nine million people have had to flee from their homes. Nearly 60 million people worldwide have been forcibly displaced in 2015. The media calls it the biggest exodus since World War II. This comparison with WW II made us think about what seeking refuge in the past might have in common with seeking refuge today. 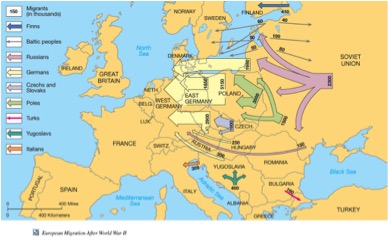 Is it possible to compare an escape of today with one of WWII?

Towards the end of WW II and in its aftermath, about 12 million Germans were expelled from East European territories, many of them were children. Today, these children have grown old, raised their own children and have grandchildren. Even the younger ones, who were born during the forced migration are now approximately seventy years old. Many of them still have to cope with their experiences of expulsion and the difficulties they had to face in their new homes, schools and neighbourhoods.

It seems that many politicians strive to swiftly find and express the differences in the context of these refugee movements. For instance, in Syria we have to deal with a civil war, not an international conflict like the Second World War. The conflict today is not a so-called ethnic cleansing and the Syrian people are not fleeing to the countries of their nationality, as it was the case with the World War II refugees. 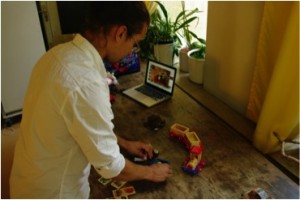 Oldrich Justa, while decorating for the images to shoot (Photo: Johanna Strunge, August 2015)

Nevertheless, if we focus on the perspectives of the witnesses of WW II, who still live today, we have the perspectives of children – as nearly all of them were children during their escape. Many children, especially the younger ones, do not know much about the context and complexity of the conflicts they are involved in. They do know, however, what it means to leave their houses, their friends, their toys, books and beds behind. They do know the fear of losing their parents and siblings, they might have even experienced a family member having to leave them. They feel the loneliness when they have to leave their family behind, because the money is only sufficient for one family member. They clearly remember the dangers of the journey; their train might have crashed or their boat might have capsized. In the worst case, their parents or close relatives were killed in the turmoil of war. It seems that, even if there is a considerable difference in terms of time and space, children’s fates in war, flight and expulsion share certain similar experiences. Therefore, the perspectives of children seem to be perfect for a comparison of different flights in order to highlight similarities and differences.

“I feel the misery of the refugees today!”

Maybe we can understand the situation of the refugees nowadays better by reflecting the fate of children of WW II?

During our interviews with children expelled during WWII, we found support for this thesis by former refugees themselves. For example, Roswitha, who was two years old when she had to flee from Upper-Silesia to Berlin in 1945, feels strong empathy for the children-refugees nowadays. She told us in an interview: “I feel the misery of the refugees today!”

We chose to focus on the 15-years-old Theodor (Theo) Pohl and his forced escape, telling his experiences in a short film. We emphasized the main aspects of his story in order to underline the universal aspects of a child’s forced migration experience. As a result, his fear, loneliness and suffering were taken into focus.

Even without the exact dates, places and names, it remains the personal story of Theodor Hugo Pohl. Only at the end of the short movie, the spectator gets to know that Theodor fled in 1946, is 85 years old today, and experienced the expulsion 69 years ago.

Without the additional information, the short film could also be a child telling his harrowing story in 2015: watching our film is meant to be irritating and thought-provoking.

We chose to visualize Theodor Pohl’s story with toys, because in the world of children, stories are often told with the help of toys.

These sophisticated questions are not easy to answer. However, there are definitely specific things we may learn from a comparison. We could, for instance, gain knowledge from the fact that many refugees still remember the unfriendly welcome in Germany seventy years ago. Their experiences of being not accepted is a part of the trauma many of them are still dealing with today. Does that mean that we have to be aware of the discrimination against today’s refugees, as this could have severe consequences for the next 50 to 100 years?