Capture: Left: Serafina Orekhova (Finland) and Tomasz Korandy (Poland) during the seminar in Berlin, August 2015. Right: Some things shouldn’t be visualized, especially if we talk about children that were medically mistreated without their consent. Photo: Agency for Historical, Civic and Media Education, Berlin

The practice of using human test persons of a particular group for medical experiments has its roots in eugenic ideas that became popular in the 20th century, particularly in the United States (already in the 1890ies-1920ies). In the US, the ‘science’ of choosing favorable groups to strengthen the nation led to mass sterilizations of ‘socially inappropriate’ groups. The idea became a pillar of the Nazi ideology, and was used to morally justify experiments conducted in the concentration camps. The perpetrators were not necessarily members of the SS, but also worked on behalf of the German Wehrmacht or for their own (pseudo-)acquisition of knowledge. Experiments on children had a special importance in the Nazi medical research.

The victims were treated inhumanly and cruel in medical testing with no regard of the outcome in most of the experiments – whether the test person survived the procedure was a matter of chance.

The survivors generally suffered from severe health issues and trauma for the rest of their lives. According to a victim, the surgeries were often done purposely with tools that weren’t sterilized to cause infection. The death rates in most of the experiments were at nearly 100%. The conditions were unimaginable. One victim, 13 years old at the time, describes her arrival at the medical barracks in Auschwitz:‘They took me to his [laboratory], where I met other children. They were screaming from pain. Black and blue bodies covered with blood. I collapsed from horror and terror and fainted.’ 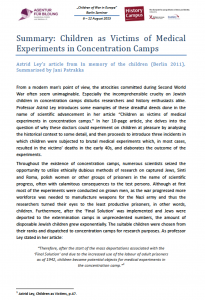 Many experiments sought to test the human body and its functions to the point of death. While adult victims were used to test the extreme limits of the human body, the experiments on child test persons were usually of a different character, such as genital alterations, transplantation of tissues and anatomical modification. A survivor from Stutthof, 14 years old at the time, recalls: ‘As I recall they – the Nazi doctors – experimented in my vagina with different instruments and cuts. That was agonizing pain. They gave me all sorts of medicine that made me nauseous.’

One of the most common categories of experiments was infecting minors with bacilli and viruses and then testing vaccinations on them. Saul Oren Hornfeld, a 14-year-old boy, was subject of medical experiments in Sachsenhausen concentration camp.

“(Doctor Dohmen) began to inject the gelatinous mass (…) through the small tube into the child’s intestine. 8 days later (…) he took a diagonally cut probing tube with a needle sticking out stepped behind Saul, felt up his back with his fingers, positioned the tube and thrust it deeply through the back muscles into the child’s body cavity. Saul screamed and bit his little fists in pain (…) Thick dark blood dripped into the test tube. Also some pieces of tissue ripped out of the liver by the needle, floated in the glass.“

Experiments on twins conducted by Josef Mengele were another atrocious malpractice of the Nazi doctors. Twins were selected in the lines of victims directed to the crematories. The twins underwent blood transfusions, genital mutilation, psychological testing, removal of organs and limbs, incestuous impregnations. In the course of one of the surgeries two Sinti or Roma girls were sewn together in an attempt to create Siamese twins.

Mengele and his experiments stand out against the other crimes, because of the way his actions were publicly discussed. Many survivors gave testimony about his experiments and it is often said that his appearance and personality were completely contradictory. He loved the opera, was a handsome man, seemed to be nice, but his character was the exact opposite.

One twin recalls the death of his brother:

“Mengele had always been more interested in Tibi. I am not sure why – perhaps because he was the older twin. Mengele carried out several operations on Tibi. One surgery on his spine left my brother paralyzed. He could not walk anymore. Then, they took out his sexual organs. After the fourth operation, I did not see Tibi again. I cannot tell you how I felt. It is impossible to put into words how I felt. They had taken away my father, my mother, my two older brothers – and now, my twin.” 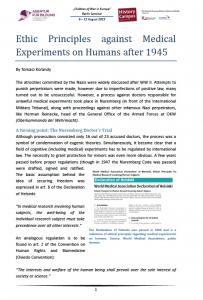 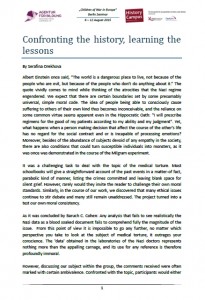 It is very hard for us to comprehend the motives of the perpetrators. For them, the victims were just “biological material” that they could abuse to boost their career or, from their twisted point of view, to develop the medical science. The history of sadistic mistreatment of children is a hideous facet of the 20th century history, and therefore the topic is often delicately avoided in the context of historical accounts. However, the truth must be embraced in its full atrocity, in order to make people realize the extent to which a modern developed society can be deprived of ordinary human feelings and witness its moral downfall. The saying “it is history” sometimes means that the matter in question has become irrelevant and it should be left behind us. However, only by retaining our realistic and compassionate understanding of the past, we can be sure of our future.

Astrid Ley: In memory of the children. Children as victims of medical experiments in the concentration camps, pp.49.

The Principles of Human Heredity and Race Hygiene” by E. Bauer, E. Fischer, F. Lenz, the doctrine of „Lebensunwertes Leben” (lives not worth living).

Tomasz Korandy
is a student of the Jagiellonian University in Cracow on the law faculty. His academic interests concentrate mainly on criminal law. Besides studies his thoughts occasionally fly towards history (especially medieval) and mountain activities (here thoughts are assisted by body).