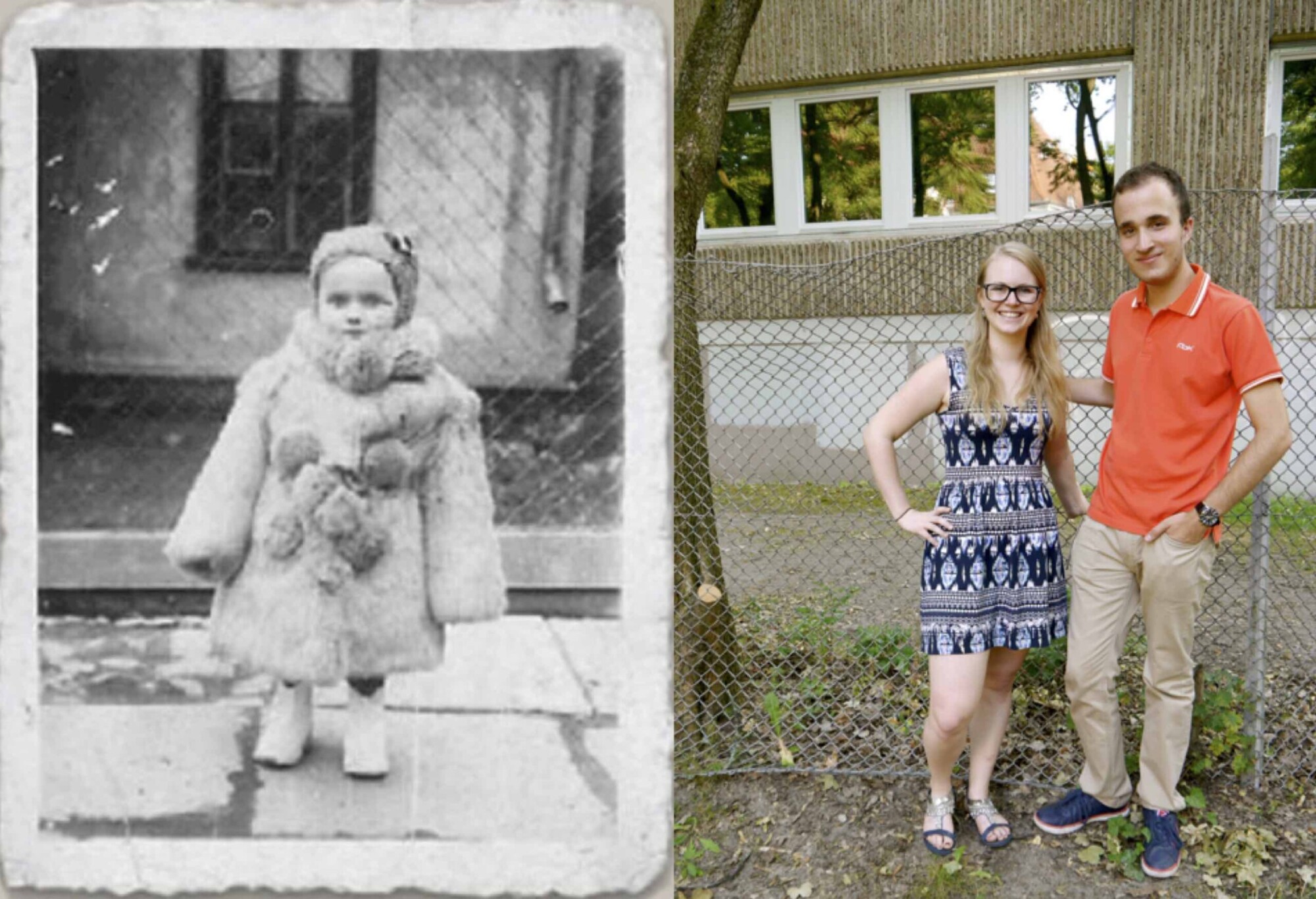 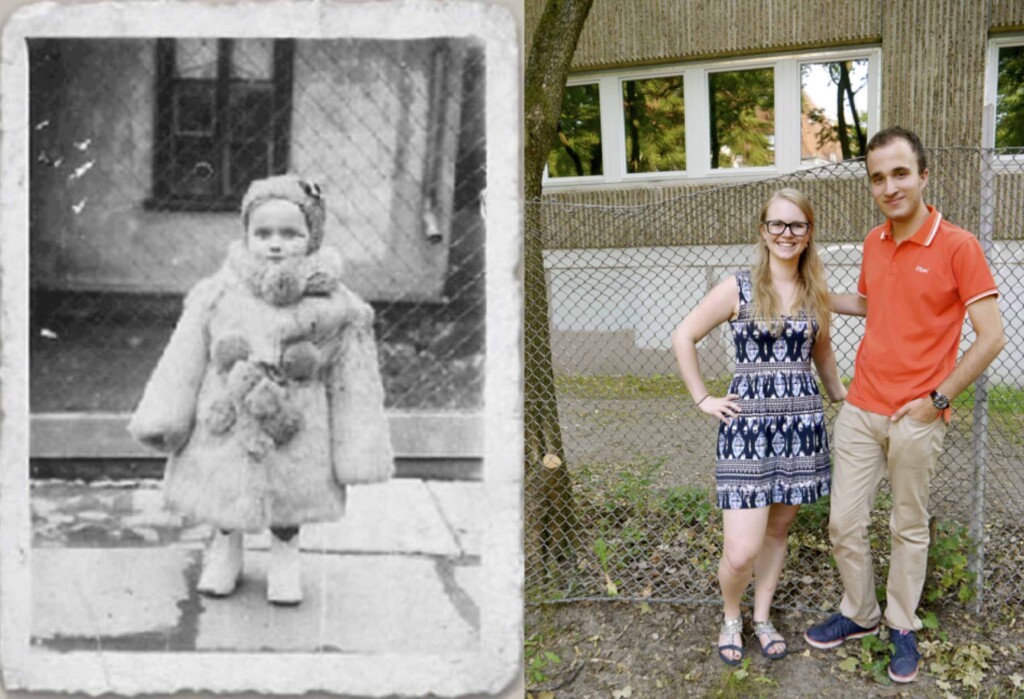 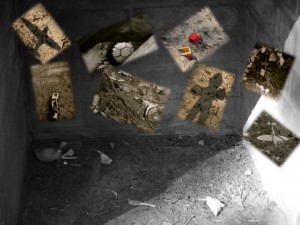 All over Europe, we are confronted with pictures of refugee children on a daily basis. These children went through terrible situations and faced enormous risks to reach countries where they can live in peace. When we see these pictures, we relate them to the conflicts of our time. However, they also could be a reminder of children during and after the Second World War in Europe. This time might seem far away from us, but the horrors of children, who struggle to survive in belligerent countries, is something that exists today as it existed 70 years ago.

In this article, we would like to take a closer look at the so-called “Hidden Children”, who tried to survive WW II by hiding from persecution. Most of them had to leave their home and their parents; they had to suffer an odyssey of changing places, taking enormous risks and living in fear. They had to rely on foreign people, who promised to save them, and not always they fell into good hands. Even if things on the one hand changed and refugee children of today are at least visible in the media, on the other hand, taken the perspective of the children, these aspects sound still valid at present. 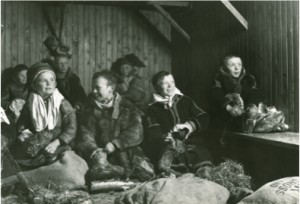 Who are Hidden Children?

What comes to our minds when talking about “Hidden Children” is the picture of Jewish children under the age of eighteen at the beginning of the war, who had to hide in order to survive the Holocaust. On this crossroad, they found themselves confronted with three different “choices” to hide:

When we talk about the Holocaust, we normally think about the Jewish victims. Nevertheless, we should not overlook that there were other ethnic groups as well, which were prosecuted by the Nazis. For example, there were children of Roma and Sinti or disabled children. For children with another shade of skin, it was even more difficult to hide.

Some children took the decision to hide by themselves, others were given away to a safer place by their own families. Hiding often meant being separated from at least one parent, although in most cases, it implied being torn away from both parents. Some families never had the chance to meet again. It was easier to find a place to hide children when they were still very young, as they could be raised with a new and false identity rather than children who remembered where they came from. Often, the former did not discover that they were raised under a false identity until they were grownups; some of them never did.

In order to provide a better understanding of these children, read the case of Felicia Lederberger, a Jewish girl born in Tarnow, Poland in 1940: In 1942 her father managed to get a false identity for her mother and a catholic birth certificate for her. They were smuggled out of the Ghetto in Warsaw and her mother raised her as a catholic. That is how she actually forgot her Jewish origins. Furthermore, she didn’t recognize her father when he managed to escape from the Ghetto and joined them in Warsaw. They introduced him as a friend of her father, as he didn’t have any papers and the risk was too high that she accidentally revealed his true identity. After the liberation, the family moved to Belgium and there, at the age of 7, she was told the truth about her Jewish roots and that the man she thought to be a friend of her father was actually her real father.

How was the situation in the hideout?

Hiding might seem a truly save option in comparison to be caught by the Nazis; nevertheless, the Hidden Children suffered a lot and the time in the refuge often was traumatic for them. Can you imagine living alone in a cellar, without seeing the daylight for months or even years, almost starving because there is basically nothing to eat? Or being exploited and abused by the people who actually are meant to protect you? How would it feel to be constantly moved from shelter to shelter, hoping to find a save place to stay for the next night? How can a 5-year-old child deal with the feeling of having no home, of not belonging anywhere and to be left alone? These are just some of the problems many Hidden Children had to face almost every day.

On the other hand, some of them found a new and safe home in their foster families. Unfortunately, these cases represent just a small percentage of the total number of the refugee children.

To get a better idea of the life of the Hidden Children, see the exhibition “Life in Shadows”

When did the hiding end?

Obviously, the outbreak of the war marked the beginning of going into hiding for many endangered children. Nevertheless, the fates of Hidden Children were a major issue even after the war. Between 1939 and 1945, the main concern was to save the children by hiding them. In the postwar period, however, the surviving families had to be reunited.

The second phase was particularly difficult, because many family members did not survive, the foster families sometimes did not want to give the children back or, in other cases, the children were given away so young that they could not remember their families anymore. Their fake identity became their true identity. It is obvious that these situations were very difficult for both sides. On the one hand, children suddenly had to live with completely unknown people who claimed to be their parents. On the other hand, it was horrible to find out that your child survived the Holocaust but, because of you trying to save their life, you paid the most expensive price – the loss of the natural relation to your daughter or son.

What do we think?

For us, living in apparently safe countries and having a home and family, it is hard to imagine what these children had to go through. If we talk about these very diverse and unique stories, we relate them to WW II. But, if we take a closer look to the characteristics that mark these fates, we can find similarities to the horror that children of war have to deal with nowadays. Until today, innocent children have to flee or hide from danger they are not responsible for, are separated from their families and have to live under shocking conditions in their home countries as well as in their refuges in Europe.

Although children in Austria can generally grow-up in a safe environment without being threatened by war, we have to face the fact that on every single day, children arrive at this country, which fled from war and need a shelter and immediate help. Refugees in Spain are a very current and complicated topic as well. The geographical position of the country places Spain in a challenging situation: the country is a strategic waypoint in the flight of African immigrants trying to enter Europe. As there are hundreds of refugees aiming to cross the frontier to Europe seeking for a safe place to live every day, Europe faces the major task to find ways to support to these people in need. Even though it is already very difficult to find an appropriate shelter with bearable conditions of living for them, we must not forget their horrible experiences of living in war countries and the resulting psychological consequences.

How is the Hiding Remembered? 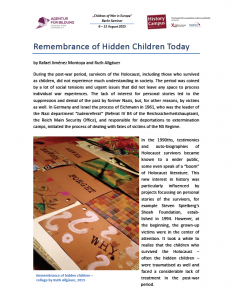 Ruth Allgäuer
Born in 1991 in Lustenau, Austria and is currently studying International Cultural and Business Studies in Passau, Germany. She loves travelling, getting to know new cultures, speaking foreign languages and meeting people from all over the world.

Rafael Jiménez Montoya
Born in 1996 in Puertollano (Spain), is a student of Audiovisual Communication at the University of Granada. In love with the seventh art, he really enjoys going to the cinema, listening and playing music and the peace of the countryside