Left: Barbed wire as a symbol for the internment camps in the postwar aftermath. This photo was taken in Vught by Tiago Fioreze in 2008 (CC BY-SA 3.0), Right: Tandem partners Dyonne Niehof (The Netherlands) and Sara Bensa (Slovenia), August 2015 in Berlin (Photo: Agency for Historical, Civic and Media Education)

Dutch boys being part of the Hitler Youth

World War II came to The Netherlands on May 10 1940, when the German army invaded. The Dutch army had to recapitulate in the night of May 15, as a result of the bombardment of Rotterdam. The war would last five years and claim the lives of almost 200,000 people in the Netherlands, the majority of them being victims of the Holocaust (more than 100,000 of them being Jews) and civilians.

My name is Dyonne Niehof, born in the Netherlands in July 1992, and I am more than aware of the fact that my life so far has been full of joy, luck, happiness and prosperity, compared to so many of my peers all around the world. For me, the concept of warfare is very hard to understand, since I grew up in a peaceful Europe, which is characterised by mutual cooperation, peace and stability. Conflicts and war have always been far away, in countries I could not always exactly pinpoint on a map, about issues which I sometimes find hard to understand.

For this article, I traced the story of Dick Woudenberg. I struggled how I could describe the boy’s story, while at the same time give as much historical information as possible. Also, I found more and more information on other stories of Dutch boys like him. Eventually the stories inspired me to write a similar fictional story, trying to represent a typical fate of a collaborator ‘s child. A story of a typical young Dutch boy like he was, raised by loving parents and with promising future ahead of them. They all came from families that were just like any other families, except for the fact that their parents were high-ranking officials in the Dutch Nazi party. 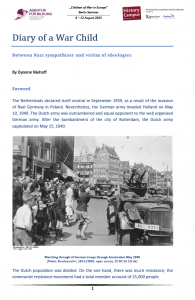 I decided to approach the perspective of these boys as if one of them was writing in a diary, mainly because I wanted to come closer to their self-perception and their thinking, but also because I wanted to highlight their painful changes, they had to go through after 1945. Not all of them regret their belief in Nazi ideology or became critical with their fathers (and mothers). But for me striking was the fact, that the Netherland society after WW II generally blamed these children or discriminated them. They were part of the collaboration side, yes, but weren’t they victims at the same time, victims of the same society, who was proud of its resistance and didn’t want to face the darker side of the medal, namely the notable number of Dutch collaborators?

Through the eyes of the young boy, who was eleven when the war broke out, I will explain how the events of 1940–45 impressed him at first but then scarred him for life. The events of the story are based on true events, but for the purpose of the story some dates have been altered. The purpose of this fictional diary is to provide the reader with an insight into the lives of these boys and their struggles to find their place in the post-war society. Dyonne Niehoff

In the beginning of June 1945, an establishment of a special kind was founded. It was located near the Slovenian city of Celje on the estate of the German Ervin Petriček, who lived there before he was expelled. It was directly connected with the concentration camp Teharje, that used to be a training camp for the Hitler Youth in 1943. In 1945, things changed. Now people who were suspected to be enemies of the winning communist regime were interned there. 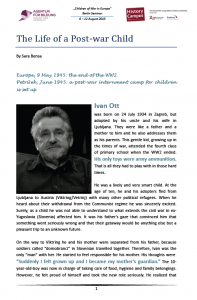 Female Partisans registered all the children being imprisoned in the Teharje camp and the next day a bus drove them to Petriček. Their mothers were promised they would keep the children safe in a better place and they would be reunited soon. A reunion never happened. Petriček became the camp where children of opponents of the communist regime were locked up. It is the camp where children were separated from their parents. It is the place where children were marked with scars that cannot ever be healed. And yet, so little is known about it and about its children. The former Slovenian government kept it as a secret. Children were prohibited to talk about it. That is exactly why I would like to present you a story of a post-war child; because he deserves to be heard. His name is Ivan Ott.

I am Sara, a student of psychology and therefore interested especially in psychological aspects of history. I am from Slovenia and I am aware that in my country we live on two sides of the truth. On the one side, there was the Domobranci, a Slovene military anti-Partisan organization, who collaborated with the German SS and Wehrmacht during 1943-1945. On the other hand there was a communist movement, who not only took over power after 1945, but also took revenge and even murdered civilians.

I believe that we have not yet achieved reconciliation as a nation; we have not dealt with our history yet. I want to contribute just one piece, just one piece of the puzzle of the huge picture of Slovenian contemporary history and present it to a wider audience. It is a story of a young boy, whose parents were murdered in post-war massacres. My story is based on his autobiography. Even though he wrote it as an adult, it is narrated from a child’s point of view. Ivan Ott was 11 years old, when he was interned into the Post-war concentration camp of Petriček in Slovenia. Sara Bensa

We tell the stories of two different boys, who were raised in entirely different circumstances, in different countries and who experienced the war in different ways. However, their stories are similar in a way, because they represent the struggles of two young boys who are trying to find their place and be accepted in their post-war societies. They were victims of being raised in a system that facilitated many crimes of war and crimes against humanity, but at the time they were probably too young to fully reflect on their own actions and beliefs. After the war they both struggled with their identity, their beliefs and their place in society for many years.

Dyonne Niehof
(1992) After having just finished her first job as coordinator of a project, which researches the legacy of the First World War in contemporary world, she is preparing for a new adventure: spending a year abroad with her boyfriend in countries as far away as possible. She loves to travel and to learn as much as she can about new cultures and countries, so she is extremely looking forward to this new upcoming adventure.

born in 1995 in Slovenia, Sara is studying psychology. She is passionate about music, interested in deep debates and loves working with people.